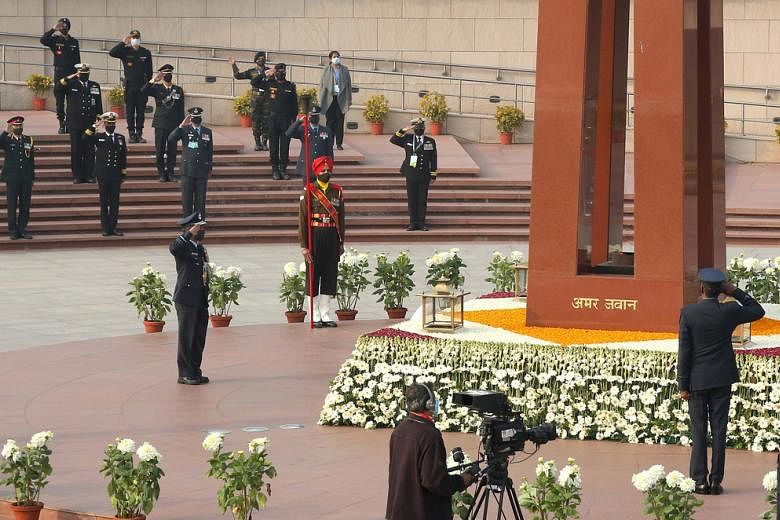 Netaji, of course, is not the only nationalist personality over which the Indian political parties have bickered with each other to prove who is the “true inheritor” of their legacies. Over the years, BJP and Congress have also indulged in one-upmanship over the legacies of Mahatma Gandhi and Vallabhbhai Patel.

In the latest battle, the Modi government first announced its decision to extend the country’s Republic Day celebrations from January 23, birthday of Netaji, instead of the traditional January 24.

Last year, the government had declared Netaji’s birthday as “Parakram Diwas”. This was followed by Modi’s announcement on January 21 that a grand granite statue of Netaji would be installed near the India Gate, and that until the statue is completed, there would be a hologram of the freedom fighter.

Mamata Banerjee-led Trinamool Congress wasted no time in welcoming the decision, but wondered if it was aimed at redressing grievances over the rejection of Bengal’s tableau or out of respect for Netaji.

Earlier, on January 16, Mamata shot off a letter to Modi expressing “profound shock” at the government’s decision to keep the state’s proposed tableau out of this year’s Republic Day parade to be held in New Delhi on January 26. The proposed tableau, Mamata said, was set to commemorate the contributions of Netaji and his INA in his 125th birth anniversary year and would have “carried portraits of some of the most illustrious sons and daughters of this country”.

She also wrote that “all the people of West Bengal are deeply pained by this attitude of the central government. Bengal was at the forefront of the Indian freedom struggle and has paid the heaviest price for the country’s Independence through the partition.”

Clearly, Mamata was falling back on her pet political plank of Bengali sub-nationalism to pin down Modi’s party. This is the plank she had used successfully to pain Modi and the home minister as “bohiragata” (outsiders) in the run-up to last year’s assembly elections in Bengal, where Trinamool Congress returned to power with a landslide win.

However, about the proposed tableau, a defence ministry official said the entire selection process follows a set of guidelines and a committee comprising experts from different fields takes the final decision. He rejected the charge of bias against West Bengal. It may be recalled that in 2016, West Bengal’s tableau on Baul singers was adjudged the best among the tableaus put up for the Republic Day march-past.

The official also pointed out that West Bengal’s tableau was selected for the parade in 2026, 2017, 2019 and 2021. Apparently, due to the sensitivities of West Bengal as well as Tamil Nadu, whose tableau on a different subject also could not make the cut, Defence Minister Rajnath Singh in an unusual move wrote separate letters to Mamata and Tamil Nadu Chief Minister MK Stalin, explaining why the two tableaus were not chosen for this year’s parade.

Seeking to make political capital out of the rejection, the Mamata government is now reportedly planning to use it in the state-level event to be held in Kolkata. Political analysts say this would only amplify the rivalry between Modi and Mamata to appropriate the legacy of Netaji.

It may be recalled that in one of the major events of 2021, Modi had set in motion the commemoration of the 125th birth anniversary year of Netaji Subhas Chandra Bose in Kolkata on January 23, and presided over the inaugural function of the “Parakram Diwas” celebrations at Victoria Memorial in Kolkata.

Besides, to mark Netaji’s return to India nearly three years after he had escaped from his house in Kolkata, the defence ministry dedicated “Sankalp Smarak” (memorial) to the nation in Andaman and Nicobar Islands on December 29.

It was on December 29, 1943 that Netaji, accompanied by some of his INA colleagues, flew to Port Blair in Andaman and Nicobar by a Japanese aircraft and, the next day, he hoisted the national flag for the first time on Indian soil. Netaji had escaped from British surveillance in Kolkata on January 21, 1941

The questions now are: how healthy a precedent would this raise for the appropriation of legacies of India’s freedom struggle stalwarts set for the present generation and the posterity? Should Indians not be uniting in imbibing the lessons from the life and work of those stalwarts? This, of course, doesn’t preclude a critical appraisal of these leaders.