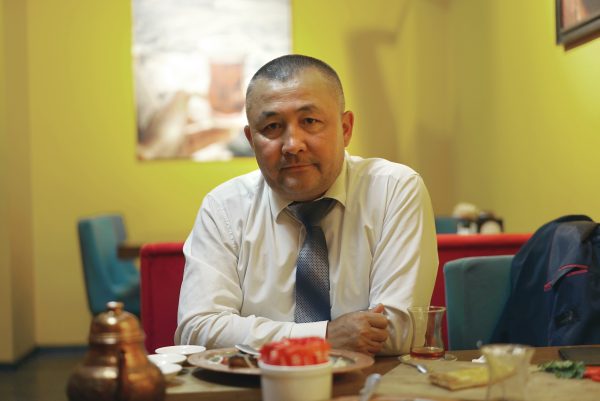 Five years ago, Bekzat Maxutkanuly was a small-time clothes merchant in Kazakhstan, uninterested in politics but worried over rumblings of a brewing crackdown across the border in China’s Xinjiang region, the land of his birth.

Now this week, as soldiers goose-stepped to anthems welcoming Chinese leader Xi Jinping on a visit to Kazakhstan, Maxutkanuly is preparing to drive from village to village across his country’s vast hinterlands to sign people up for a political party that will challenge Beijing, not welcome it.

“I never had plans to engage in politics,” said the 46-year-old Chinese-born ethnic Kazakh. “But then I started to realize the situation in Xinjiang was a huge problem, one that wouldn’t blow over in a year or two.”

The story of his political awakening illustrates how China’s crackdown on Uyghurs and other Muslim groups in Xinjiang has alienated many people in Central Asia, even as Beijing holds sway among its governments.

When the arrests in Xinjiang began, thousands of Kazakhs, Kyrgyz, Uzbeks, and others of Central Asian ethnicity were abducted by authorities along with Uyghurs and swept into a vast network of camps and prisons.

Behind closed doors, Kazakhstan’s government pleaded with Beijing to release Kazakhs swept up in the crackdown. But in public, they said nothing and abstained from U.N. votes on whether to condemn or support China’s policies in Xinjiang.

China is a major investor in Kazakhstan’s oil and gas industries and loans billions of dollars to build railroads and highways. This week, Kazakh President Kassym-Jomart Tokayev met Xi on the airport tarmac when he arrived and treated him to a lavish state banquet.

“Now’s really not the time for him to visit,” he said.

Born to farmers in a small, heavily Kazakh village on China’s western frontier, he lived modestly but tested well, landing him a spot in college in Xinjiang’s capital.

There, he said, he was bullied relentlessly for his halting Mandarin. Professors, officials, and classmates criticized him, making him feel an outsider. In the late 1990s, his family moved to Kazakhstan, leaving behind a country they felt never truly welcomed them.

For decades, he worked as a teacher, then translator, then trader. His political awakening began five years ago, when friends and relatives back in Xinjiang stopped calling and texting. He felt something was amiss.

He spotted speeches online by Serikzhan Bilash, a Chinese-born Kazakh activist who spoke out about growing accounts of brutality and mass detentions in the region.

Undercover police shadowed their meetings. Key figures were called in for questioning. In 2019, officers tackled Bilash in a hotel bathroom and took him to jail. Later that year, Bilash fled the country and named Maxutkanuly the new leader of Atajurt.

Now, after beatings, protests, and dozens of police run-ins, Maxutkanuly wants Atajurt to bring fundamental change: A democratic Kazakhstan, where Chinese-born Kazakhs and others will be free to air their concerns.

He said years of struggle under state repression taught him and other members of his group that actual power is necessary to get results. That’s why a formal political party is necessary, not just a grassroots group, he said.

“The Kazakh government is helping the Chinese government. They’re trying to block us,” Maxutkanuly said. “To achieve our goals, we need to change the political situation in Kazakhstan first.”

The odds of success are slim. For nearly three decades, Kazakhstan was ruled by a Soviet-era strongman. His successor, a former Soviet diplomat in Beijing, looks no less inclined toward democracy. Political opponents are monitored, harassed, and at times hounded out of the country. Despite nominal reforms, Kazakhstan continues to find ways to deny opposition parties’ applications for official registration.

Still, Kazakhstan cultivates good relations with the West to balance the power of its neighbors, Russia, and China. In a part of the world populated with brutal rulers, Kazakhstan’s leaders model themselves after technocratic Singapore instead — leaving some space for organizing and civil society.

The plan, Maxutkanuly said, is to sign up 50,000 people, 10 times more than the legally mandated minimum necessary to register a political party.

It will be tough, requiring him to go door-to-door to register elderly people deep in the countryside, some of whom are illiterate or don’t have cellphones.

The Chinese-born Kazakh community is riven with divisions, fueled by suspicions of spies and fear of the state. Some are skeptical of Maxutkanuly, wondering what his motives are and how far he can go in challenging the state.

Still, he has supporters. Nurlan Kokteubai, a former schoolteacher who spent seven months in a camp in Xinjiang, joined the party. He will do anything, he said, to draw more attention to the plight of Chinese-born Kazakhs.

“The Kazakh government doesn’t support us. Tokayev listens to Xi,” Kokteubai said. “If you don’t have a party, what kind of power do you have? It’s better this way.”

Kazakhstan is going through turmoil. Protests in January turned violent after thuggish men swept in, smashing cars and setting buildings ablaze. The Kazakh government invited Russian troops to quash the uprising, and hundreds were killed.

Maxutkanuly was among those protesting in January at a march in Kazakhstan’s capital. He said his nose was beaten bloody by police and he spent the night in jail.

Still, he is determined to press on.

“If I get arrested, so be it. If I don’t say anything, who’s going to help the Kazakhs in Xinjiang?” he said. “Someone needs to speak up.”