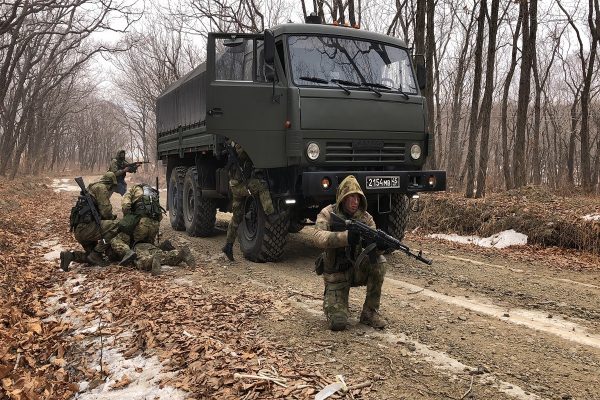 U.S. concern is understandable, but some U.S. officials seem to be misjudging both China-Russia relations and China’s broader foreign policy.

First, some Americans do not have a clear understanding of China-Russia military relations. China and Russia are not military allies. In other words, when one side is at war, the other side has no treaty or legal obligation to help. This is completely different from the military alliances between the United States and NATO countries.

Therefore, even if Russia and Ukraine go to war, China has no obligation to support Russia. Indeed, during the Crimea crisis seven years ago, China did not openly support Russia’s position.

On February 4, China and Russia issued a joint statement in which China did mention its support for Russia. But the nuance is important: China’s support for Russia focused on insisting that Moscow’s security concerns must be guaranteed by the West and opposing the threats to Russia’s security from NATO and other Western countries. Everyone knows China also faces pressure and security threats from the United States in the Asia-Pacific region, so it is not surprising that Beijing would support Russia in the face of similar pressure. However, this is not the same as China offering its approval of a Russian invasion against Ukraine.

A comparison can help clarify China’s support in this case: China’s attitude to Russia is equivalent to its support for North Korea or Iran in their demands that the U.S. lift sanctions. China’s support does not mean Beijing would support North Korea starting a war on the Korea Peninsula or Iran striking Israel.

China has maintained friendly relations both with Russia and Ukraine for a long time, which is a basic and balanced policy. During the Ukraine crisis, China never criticized Ukraine, only condemned the U.S. and NATO. Ukraine is well aware of it.

2022 marks the 30th anniversary of the establishment of diplomatic relations between China and Ukraine. President Xi Jinping of China and President Volodymyr Zelensky of Ukraine exchanged congratulatory messages a month ago. Xi clearly mentioned he has always been committed to strengthening the friendly and cooperative relations with Ukraine. It is impossible for China to change its position after a month.

In addition, the Chinese ambassador to Kyiv published an article in the Ukrainian media, publicly emphasizing that China has always supported Ukraine’s independence, sovereignty, and territorial integrity. This is a clear sign that China could not support Russia’s possible invasion to Ukraine – especially because China has never publicly stated a view that Crimea belongs to Russia.

If China is against a Russian invasion of Ukraine, why has Beijing not criticized Russia, like the West did? There are two main reasons. First, considering the Sino-Russian friendship, China’s public questioning of Russia will damage the friendship. At this time, Beijing should show solidarity, rather than emphasize differences – this is a question of both face and diplomatic skills. China will express its true attitude behind closed doors.

Second, Russia may have privately assured China that it will not mount a direct invasion against Ukraine. That would explain why China has been accusing the U.S. and the NATO of exaggerating the crisis, and why Beijing has remained indifferent as the West withdraws both diplomats and citizens from Ukraine.

In addition to jointly coping with Western pressure, there is a basic logic in the development of Sino-Russia relations: That is, the two neighboring countries must be friendly, and this friendship will benefit both sides. For example, China’s energy security can be met through Russian overland oil and gas pipelines, which reduces the risk of energy transportation in the Persian Gulf and the Malacca Strait. Russia will also gain huge economic benefits from its exchanges with China. As neighbors, it is a natural process for China and Russia to establish a partnership.

Some Pentagon officials merely think about the issue of China-Russia cooperation from the perspective of the countries mutually facing Western pressure, without seeing this as a case of both international common sense and Chinese diplomatic skills.

In the past year, there have been many high-level contacts between China and the United States, and they all said the two countries should avoid misjudgment of each other. The Pentagon’s interpretation of China’s support for Russia is exactly the sort of misjudgment that must be avoided. If a similar misinterpretation impacted an issue directly impinging China-U.S. relations, I am afraid this risk will be even greater.

There are indeed some people in China who have similar views to some U.S. officials, believing the Chinese government actually supports Russia in a possible war. But they are mostly young people and nationalists with little experience. Their logic is that war in Eastern Europe will contain U.S. support for Taiwan, and mainland China can use this opportunity to recapture Taiwan. Therefore, when the nationalists heard Putin was going to negotiate more with the West, and even withdraw some troops from the military drills, they felt very disappointed. They thought China lost a good chance to solve the Taiwan issue.

Although this idea is naive, it does exist in Chinese society. These nationalists, like some U.S. officials, completely miscalculated China’s freedom of action on the Taiwan issue.

Just like Russia does not consider the Taiwan issue when it has a dispute with Ukraine, China will not consider the relationship between Russia and Ukraine in order to resolve the Taiwan issue. It’s quite different. If Putin insists on invading Ukraine one day, China can’t stop it. If China one day sends troops against Taiwan, Putin will not able to prevent that either.

In my view, China will think more about morality and reputation when it comes to the Ukraine crisis, largely in order to take into account public opinion and Chinese people’s attitudes. American commentators don’t seem to realize the importance of either of these factors in China’s foreign policy.

What would happen if China supported Russia’s possible invasion of Ukraine?

First, it would put China in an awkward position in the international community. China has been shaping an international image of justice for decades. The Five Principles of Peaceful Coexistence were China’s foreign policy in the 1950s, and in the era of Xi Jinping, China still embraces these principles as the basis for international exchanges. The core of the Five Principles is mutual respect for each country’s sovereignty and territorial integrity and mutual nonaggression.

If China supports Russia’s invasion of the Ukraine, it would be a violation of the bedrock of its 70-year-old foreign policy. China will lose its international moral high ground, as well as damage its international reputation and image. This will make it a little awkward for China to promote its Good Neighbor and Friendship Policy and the Five Principles. At times, urgent national interests may take precedence over principles, but China has no compelling interests at stake in Ukraine, certainly not enough to make Beijing willing to abandon its foundational foreign policy.

The Chinese people also agree that China should uphold justice in the international arena. If China publicly endorses Russia’s aggression against Ukraine, it may be difficult for the Chinese people to understand the sudden change. As a result, such a move will cause the Chinese government to lose some ordinary Chinese support.

Not long ago, a U.S. research institution suggested that China has a “silent majority” who do not like Chinese government policy, which is consistent with my observation. In my view, these people are not all anti-government or anarchists, but more silent dissenters who subtly boycott the overly nationalist atmosphere in today’s society.

The Chinese government must know this as well. When making policies, it will consider the attitudes of as many people as possible and satisfy the interests of the most possible people, in order to smooth the way for domestic social management.

With that in mind, it’s important to know that most Chinese have mixed views about Russia; some are outright negative. After all, Russia was one of the European powers that encroached on China during the “century of humiliation.”

For many Chinese people, when the see the Ukraine crisis, they think of Russia’s territorial expansion into China more than 100 years ago. You will never see this point raised in the state media, but you can find it easily on Chinese social media. Many people comment on the Weibo page of the Russian embassy in China, asking Russia to return Haishenwai (Vladivostok in Russian) to China. As the crisis in Ukraine deepens, many Chinese netizens accuse Russia of being an aggressor.

In this context, should China’s government support Russia in invading Ukraine, it will make more Chinese people doubt the justice and legitimacy of their own government, which is not good for maintaining social stability.

Russian diplomats are well aware of this strain of Chinese public opinion. They treat it calmly and only emphasize Sino-Russian friendship. It shows that both China and Russia have left some flexibility and maneuvering space for each other. Beijing and Moscow understand they will not always be completely in lock-step. It’s time for Washington to grasp this point as well.