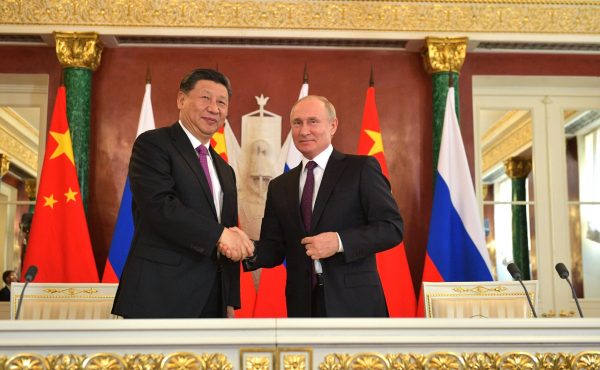 China claims to be neutral in Russia’s war in Ukraine, but this neutrality is easy to see through: Beijing refuses to criticize Russia’s violation of Ukraine’s sovereignty and territorial integrity, and it blames the United States and NATO for inciting the war. So far, the “Comprehensive Strategic Partnership of Coordination for A New Era” between Russia and China, concluded in 2019 and re-affirmed during the most recent bilateral summit on February 4, has held fast throughout the war.

But does this partnership have “no limits,” as Presidents Xi and Putin claimed in their joint statement? China’s ambassador to Washington, Qin Gang, helpfully explained that the partnership, while having no limits, was bounded by the Charter of the United Nations. Yet the Charter clearly forbids the use of force except for purposes of self-defense, and Russia is conducting its war (a war of aggression, if there ever was one) exclusively on Ukrainian territory, while China – which concluded a strategic partnership with Ukraine in 2011, as well – looks the other way. Thus, in China’s eyes, even the breach of the most fundamental principles of international law and the U.N. Charter is no obstacle to continuing the partnership.

So what would make China think twice about its partnership with Russia? The cold answer is: China’s self-interest, as perceived by the Chinese Communist Party’s leadership. In navigating its relationship with Russia, Beijing will pursue its interests through what might be called a “maximin” strategy: it will try to maximize the benefits it can reap from Russia, its war in Ukraine, and its confrontation with the West, but minimize the negative fall-out from this confrontation for China.

The most important shared objective underpinning the China-Russia partnership is the desire to roll back U.S. influence in the world and revise what both see as a Western-dominated international order. In their animosity toward Washington and their determination to recast the present international order in line with their own preferences, Moscow and Beijing see eye to eye. This provides ample opportunities for cooperation, in which Russia has important assets to offer: its permanent seat and veto power in the U.N. Security Council, its military power and armaments technologies, its skill in exploiting cyberspace for subversive purposes, and its diplomatic reach and experience.

By coordinating their respective capabilities, Russia and China can enhance their impact on Western bastions of influence, as they have shown repeatedly already – in joint military exercises, in parallel and possibly coordinated cyberattacks, and in their voting behavior in the United Nations. Whether the Ukraine war will weaken the United States and the West or rather strengthen it, as many in China seem to assume, is still an open question, though it may eventually weaken both Russia and the West, and thus strengthen Beijing’s position vis-à-vis Washington.

It is hard to see how Russia could benefit from this war in any way. For China, this will make Russia a diminishing asset, but also one whose dependence on China will grow. That will benefit China commercially, economically, and possibly also politically, as Moscow will be obliged to pay heed to China’s wishes. Russia’s aggressive imperialism may also induce Central Asian countries to lean more on China as a counterweight against Russia’s overbearing influence.

Against these benefits Beijing will have to weigh the drawbacks of its strategic partnership with Russia. China’s reluctance to distance itself from Putin’s war in Ukraine clearly has caused reputational damage to China, particularly in Europe. While Western sanctions against Russia have opened up opportunities for China to import more Russian oil, gas, and wheat at bargain prices, they also hurt Chinese companies that might be caught in third-party effects of those sanctions; as a consequence, many of them have become cautious in their dealings with Russia, so as not to violate sanctions openly.

More worrying than the direct impact of sanctions against Russia on China may be their impact on the global economy. The loss of Russian and Ukrainian exports of fossil fuels, grain, and minerals has begun to disrupt world markets, explode prices, and create supply chain frictions; this bodes ill for world economic performance, hence for China’s own exports and growth. Politically, outrage over Putin’s war in Ukraine has united NATO under U.S. leadership, accelerated its shift of attention toward the “China challenge” and the Indo-Pacific region, and furthered the new cold war between Western democracies and the authoritarian (or totalitarian) Sino-Russian tandem. Washington’s campaign to contain the rise of China has thus gathered momentum and strengthened the bonds with its traditional allies in Europe and Asia-Pacific.

Yet the greatest worry for Beijing should be the fact that Russia, under Vladimir Putin, has demonstrated recklessness and an inclination to create mayhem through war. His penchant for wanton destruction breeds instability, at home and abroad, as Putin shows no interest in creating and sustaining functioning political order beyond his own whims. Xi, on the other hand, pursues a long-term strategy for China’s rise, oriented towards the 100th anniversary of the establishment of the PRC in 2049. For this, China needs domestic and international stability, hence a functioning global order. Moreover, Putin’s ultranationalist Eurasian ideological agenda and racist imperialism, which centers on Russia’s sacred mission and a cult of war, starkly differs from that of the CCP leadership. This could easily collide with Chinese interests, notably in Central Asia, where China wants and needs political stability.

For now, the differences between Russia and China are obscured behind a façade of bonhomie between the two strongmen in Moscow and Beijing, who seem – or pretend – to like and trust each other. Yet in pursuing its maximin strategy, Beijing will weigh its geopolitical ambition to undermine U.S. dominance against its economic interests. The result will be a continuation of Beijing’s pro-Russian neutrality. That will mean a weaker Russia, one more dependent on China and therefore perhaps also more amenable to Beijing’s influence. It will not, however, bring China to throw its weight behind efforts to end the war and thus live up to its responsibility as a global power.