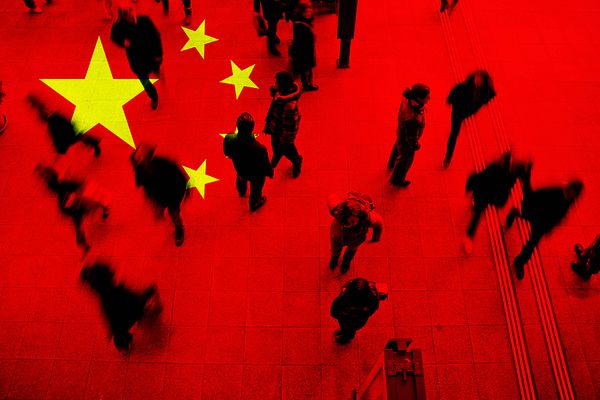 Pundits have gone to great lengths to project their interpretations of Chinese perceptions of Russia’s invasion of Ukraine. Sadly, few examine exactly what China communicates about the conflict. The People’s Republic of China (PRC) focuses mainly on placing the blame for the conflict squarely on the West while also offering tepid support for Russia. These views represent an evolution of cooperation between Russia and China, with a recent communique vowing that the “friendship between the two States has no limits.”

But of course, there are limits. In analyzing the specific language offered by representatives of the PRC through the state run Zhong Sheng pen name in the People’s Daily newspaper, three key themes emerge: emphasizing NATO is a threat; pointing to the Cold War mentality of the United States as a source of discord; and asserting that by leveraging massive sanctions, the United States is waging “financial terrorism.” At the same time, the PRC has not asserted that Russia’s territorial ambitions are legitimate.

Zhong Sheng was notably silent on the Russian invasion of Ukraine for the first three weeks. It seems that only when the failures of the Russian army became evident by mid-March did Zhong Sheng start to comment, mainly to push for peace talks. According to commentaries from Zhong Sheng, the U.S. projects a vision of being the guardian of the peace while at the same time encouraging the Ukraine conflict.

Seeking to offer a constructive path forward, China frequently asserts that both sides in the conflict need to go to the bargaining table and “settle their differences.” Unfortunately, the war in Ukraine has long since moved past the time where a win-win situation (a common theme in other Zhong Sheng articles) can be extracted from the conflict, with constant death and destruction raining down on Ukrainian villages.

Being a bit more realistic about the conflict, its origins, and potential solutions would help stabilize the situation and position China as a mediator. Sadly, such a view is also unrealistic given the historic alignment between Russia and China.

Chinese Perceptions of the Ukraine Invasion

While both sides traffic in mistruths and disinformation, China supports the Russian talking point that the United States is directly responsible for Russia’s invasion of its neighbor. China further dives into the conspiracy narrative that the U.S. supports bioweapons research, seeking to blame the United States for bioweapons fears after the COVID-19 pandemic and the unfounded conspiracy that China itself started the pandemic in a bioweapon lab.

On May 2, the U.S. Department of State put out a statement denouncing Chinese misinformation and “blame-shifting” about the invasion, including Beijing’s echoing of Russian talking points and amplifying the conspiracy theories about U.S.-backed bioweapons in Ukraine.

Others have offered their views on China’s perceptions of the Ukraine conflict. Most focus on what this conflict means for a potential war in Taiwan, even highlighting that China has now the choice to follow Russia’s footsteps and make a move for Taiwan. Certainly, there are parallels with a massive invader being confronted by a technologically capable adversary supported by the global hegemon, yet the chance of war is slim to none since China would likely avoid a contested amphibious operation against an entrenched defender.

When writing about Ukraine, Zhong Sheng’s tone is that of a concerned observer, instead of an involved actor. This is obviously different in pieces about Taiwan, which are markedly aggressive and uncompromising. While warnings and references to the One China Principle are assertively brandished in recent pieces about Taiwan, Zhong Sheng’s messaging about Ukraine is more ambiguous or veiled.

The near-total absence of the mentions of the concepts of national sovereignty and territorial integrity in pieces about the Ukrainian War is revealing of the PRC stance on the conflict. Given the blatant breach of Ukrainian sovereignty by Russia, it can be interpreted that the Chinese foreign policy elites are willing to trade such a key principle if it serves its strategic interests – in this case, implicitly backing Russia as a bulwark to perceived U.S. and NATO encroachment.

The key theme that emerges, and certainly the one most echoed through the articles, relates to NATO expansion as the cause of the war. Zhong Sheng supports the Russian discourse and states that the gradual rounds of NATO enlargement since 1990 are the root of the current conflict. “NATO survives on conflicts as a Cold War relic,” according to Zhong Sheng. In fact, Zhong Sheng mentions NATO expansion or enlargement a staggering 34 times in 10 articles written for People’s Daily Online from April to May.

The root of this perspective is not even that the West promised Ukraine entrance into NATO, but rather that NATO has expanded to Russia and Ukraine’s borders, threatening Moscow. While analysis of NATO expansion and what Russia and the United States agreed to after the Cold War has a long history, Zhong Sheng’s central point is that NATO is the cause of the conflict, even though there was no movement of admission of Ukraine.

Further, in the PRC’s eye, NATO is unwilling to take steps toward the resolution of the conflict, instead choosing to prop Ukraine up through military aid and arms sales. For instance, Zhong Sheng laments that the NATO summit on March 24 did not make any strides toward peace, rather adding “oil to the flames” by unequivocally siding with Kyiv.

A second key theme, closely linked with the issue of NATO’s enlargement, is that of U.S. hegemonic ambitions, which highlight its “Cold War mentality.” Zhong Sheng’s articles do not even mention the word “invasion,” avoiding blaming Russia for their outright aggression. Instead, they highlight hegemony 27 times and Cold War mentality 25 times.

The U.S. is using NATO as a vessel for its hegemonic interests, clinging to what Zhong Sheng repeatedly labels a Cold War mentality. The PRC suggests that the U.S. government and the country’s military-industrial complex benefit from a protracted war.

For Zhong Sheng, the conclusion is that the U.S. should eschew this Cold War mentality and its hegemonic ambitions, as the PRC perceives the war in Ukraine as just a way for the U.S. to ensure its global preponderance. Similarly, European NATO member states are portrayed as “shouldering the consequences” of a conflict fueled by U.S. hegemonic ambitions.

The PRC directly argues that the United States is creating conflict with its division between the authoritarian and democratic world, which is now creating financial blocs. Typically, Zhong Sheng highlights U.S. failures at democracy and human rights while defending China’s own poor record. Pointedly, Zhong Sheng also argues that the United States is committing financial terrorism by weaponizing its economy.

In this narrative, the United States is plundering the world by leveraging sanctions against Russia and forcing “other countries to obey them through the threat of secondary sanctions.” The U.S. vision of “economic hegemony and financial terrorism have triggered widespread concerns of the international society and are condemned by many countries,” though Zhong Sheng leaves out exactly which countries.

Zhong Sheng argues the United States only threatens the global economic system with sanctions against Russia. The sanctions will aggravate the already sluggish world economy and further exasperate separation. These actions highlight for the PRC the U.S. goal of “militaristic and economic annihilation of Russia.”

For the PRC, the United States weaponizing its economy is a new form of “hybrid warfare” launched by “providing massive military assistance for Ukraine and imposing sanctions.” In Zhong Sheng’s estimation, bloc confrontations pushed by the United States only trigger a security dilemma; the articles neglect to mention that Russia invaded Ukraine without provocation.

Paths Out of Conflict

The Zhong Sheng articles highlight China’s “responsible” role, hinting at any future mediation efforts. The PRC is juxtaposing their stance of negotiations with the West’s active backing of Ukraine, which limits any prospects for peace. China’s role in the conflict is defined as constructive and inclusive of all parties involved. Zhong Sheng highlights the need to address Ukrainian as well as Russian “legitimate concerns.”

The goal of this stance is to build a common European security framework that should not alienate or humiliate Russia, which Zhong Sheng argues is what the post-Cold War order and the subsequent NATO expansion did. This is in line with the frequent criticisms of NATO’s alleged Cold War mentality. In the view of the U.S. State Department, China is only amplifying Russian disinformation.

PRC views on the Ukrainian conflict are not surprising. What is interesting is that China is not offering direct material support for Russia and only reinforces typical talking points in line with their interests. Zhong Sheng has not gone out of its way to support Russia; rather it seeks to contain U.S. ambitions that damage to the global financial system.

Until both sides of the geopolitical divide can come to some reasonable understanding on the source of discord without the standard reference to NATO, terrorism, and hybrid warfare, the conflict will remain devastating and continue to sow global divisions.