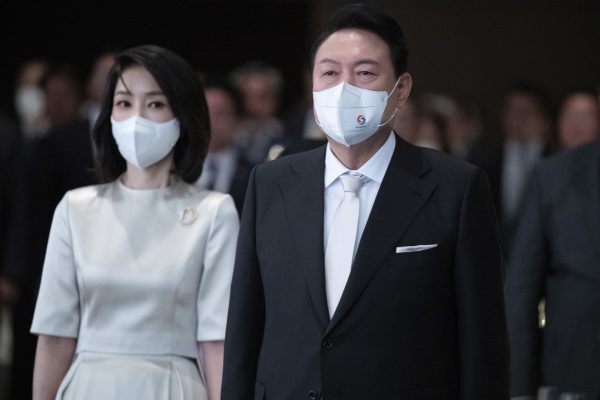 In the United States, the presidential office is backed by bureaucracy: The Office of the First Lady is an established White House entity with a history of promoting key agenda items of the Executive Office of the President. By contrast, South Korea’s current Presidential Office does not have an Office of the First Lady. As a presidential candidate, Yoon Suk Yeol pledged to abolish the informal body that had traditionally supported the president’s spouse. The campaign commitment came as a part of Yoon’s Presidential Office reform measures. However, it was related to a scandalous fuss developed during the election campaign.

During the campaign, Yoon’s wife – and current First Lady – Kim Keon Hee, then a professional businesswoman heading an art event-planning company, was catapulted to the center of media scrutiny and political mudslinging that targeted both her private and professional lives. Rumors flew that she used to work as a hostess at a nightclub, and that she was imposing shamanistic beliefs on Yoon. In response to allegations that she had exaggerated her academic credentials and plagiarized her Ph.D. dissertation, Kim made a public apology. During a press conference, Kim vowed to help Yoon quietly and from the sidelines.

However, Kim’s public visibility has increased dramatically since Yoon’s inauguration, and new controversies are emerging. She reportedly played a role in the decision to relocate the presidential office and residence from the Blue House to Yongsan. Earlier this week, Kim paid tribute to the late former President Roh Moo-hyun and met with the former first lady and spouse of President Roh. Kim was accompanied by her former staff from the art event planning company, whose attire raised complaints from both supporters of Roh and the opposition political party. In response, ruling party leaders have asked Yoon to rescind his campaign commitment and revive the Office of the First Lady, or at least form an official team to support the first lady within the Presidential Office to avoid public faux pas.

Many Koreans may be particularly sensitive to questions on the influence of unelected and unaccountable individuals due to the recent memory of the political scandal involving former President Park Geun Hye’s unofficial aide and secret “shaman adviser.” Corruption and influence-peddling scandals have been relatively regular occurrences in South Korea, but the scale of the allegations immensely angered South Koreans and led to Park’s impeachment. It turned out that the “shadow president” had influenced South Korea’s public and private affairs, from its foreign relations to the admissions procedures of one of its top universities.

However, the informal and apolitical influence of first ladies is neither novel nor completely avoidable. As the president’s most trusted partner and confidante, the president’s spouse has always exercised behind-the-scenes influence – which, in the United States at least, has now largely become accepted.

In the United States, the position of the first lady was originally an extension of the cultural expectations of a wife at that time, such as welcoming guests and hosting social events at the White House. However, the role has evolved over time to become more formal and is now one of a de facto adviser to the president. Indeed, the public visibility of the ceremonial and social functions holds a highly political and diplomatic dimension. In some cases, the first lady served as a key player in the policy process and has at times surpassed the vice president and senior advisers in terms of visibility and even power and influence both in and out of the White House.

Historically, some first ladies played an active role in government and assumed official roles within the executive branch. Edith Wilson served as the sole conduit to President Woodrow Wilson when he was incapacitated after a stroke. During the Great Depression, Eleanor Roosevelt became the unsalaried deputy director of the Office of Civilian Defense. Rosalynn Carter served as the honorary chairperson of the president’s Commission on Mental Health and testified before Congress on President Carter’s Mental Health Systems Act. Hillary Clinton was known for deeply engaging in diplomatic relations, helping set the domestic agenda, and evaluating the president’s Cabinet nominees.

Despite this history, the real or imagined influence of first ladies became fodder for political opponents to attack the president’s independence and judgement. Rosalynn Carter generated controversy by insisting on attending Cabinet meetings. President Bill Clinton’s appointment of First Lady Hillary Clinton as chair of the President’s Task Force on National Health Reform led to a lawsuit from an interest group.

Even many advisers saw first ladies as competition for the ear of the president and have been known to leak stories about the “inappropriate influence” to the press. These criticisms were fiercest in the United States when the first ladies sought to play specific and formal policymaking roles.

However, the absence of a clearly defined role for presidential spouses carries a higher risk of unchecked private influence on state affairs. Acknowledging the public and personal roles of presidential spouses and understanding the nature and importance of those roles to the government is ultimately desirable to strengthen the so-called “second annex” within the President’s Office instead of abolishing it.