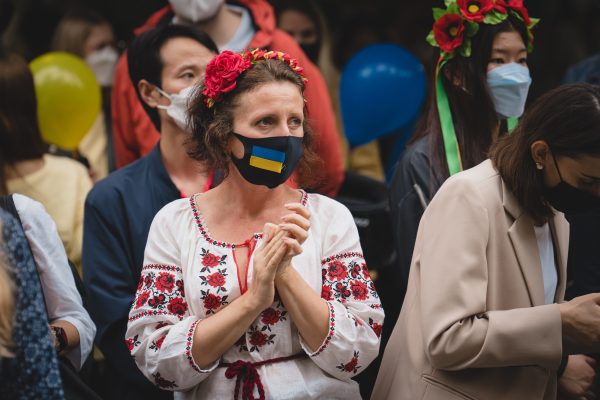 On March 5, the Ukrainian embassy in the Vietnamese capital Hanoi held “a charity bazaar” aimed at raising funds and “awareness about Putin’s diabolic invasion of Ukraine and its terrible consequences.” Expressing its gratitude for the wave of support it had received since the invasion, the embassy’s Facebook invitation called on the Vietnamese public to come to the embassy to “get acquainted with Ukrainian culture, food, music, buy souvenirs, and more.”

“Everyone is welcome,” it added, “except for the supporters of war crimes made by the Russian Federation and the Republic of Belarus.”

As far as the Vietnamese government was concerned, this “disinvitation” also extended to members of the country’s beleaguered pro-democracy movement. According to the advocacy group Human Rights Watch (HRW), the Vietnamese authorities prevented eight prominent pro-democracy advocates from expressing their solidarity by attending the Ukrainian embassy event.

In a statement yesterday, HRW quoted a Facebook post from one human rights advocate, Hoang Ha (also known as Song Que), detailing how on the evening before the Ukrainian charity event, local security agents asked her whether she planned to attend. Then, the following morning, a security agent in civilian clothes showed up at her house and prevented her from leaving, in order to stop her from attending that evening’s event.

HRW quoted another message from Dang Bich Phuong, who wrote on her Facebook page, “Ukrainian people, please sympathize with us. When we express our support for you online, our accounts got blocked. When we tried to take to the street to support you, they blocked our doors.”

This reaction was very much consistent with the tactics described in a recent HRW report that alleged the Vietnamese government’s “routine violation of the right to freedom of movement and other basic rights” of activists, human rights defenders, and other dissenters. The report details a range of tactics that the Vietnamese security state uses to prevent dissidents from attending protests and controversial events, and traveling abroad. These include harassment, various forms of house arrest (including supergluing locks and barricading people in their homes), and other forms of short-term detention, such as being driven around the city by plain-clothes security officials

The incident was relatively minor, but sheds some interesting light on the Vietnamese Communist Party (VCP)’s worldview and perceptions of its own vulnerabilities. The first reasons why the ruling government would block democracy campaigners from attending the Ukrainian embassy event is fairly clear, if frankly paranoid. This is its perennial desire to prevent local dissidents from interfacing with foreign governments and prospective foreign supporters.

Similarly, while Ukraine has not indulged in the sorts of democracy promotion activities and rhetoric that Hanoi’s securocrats most fear, the narrative of democratic resistance against authoritarian control is anathema to Hanoi. In its eyes, allowing Vietnamese pro-democracy campaigners to express solidarity with the besieged people of Ukraine would no doubt set an “unwholesome” precedent.

It would also not be hard to draw a parallel between the Ukraine-Russia relationship and Vietnam’s own fraught relationship with China, nor to compare Ukraine’s heroic resistance to Russian domination what many pro-democracy dissidents view as the VCP’s slavish relationship with its “big brother” in  Beijing.

Standing behind all of this, of course, is the government’s sensitivities about criticisms of Russia, a close partner of Vietnam dating back to the early Cold War, and the source of the lion’s share of the country’s defense equipment. This close relationship is the best explanation for the position of accommodating neutrality that Hanoi has taken since the Russian invasion on February 24. During the March 2 vote at the United Nations General Assembly that “deplored” Russia’s action and called for its withdrawal from Ukraine, Vietnam was one of the two Southeast Asian nations that  abstained. (The other was its neighbor and satellite Laos.)