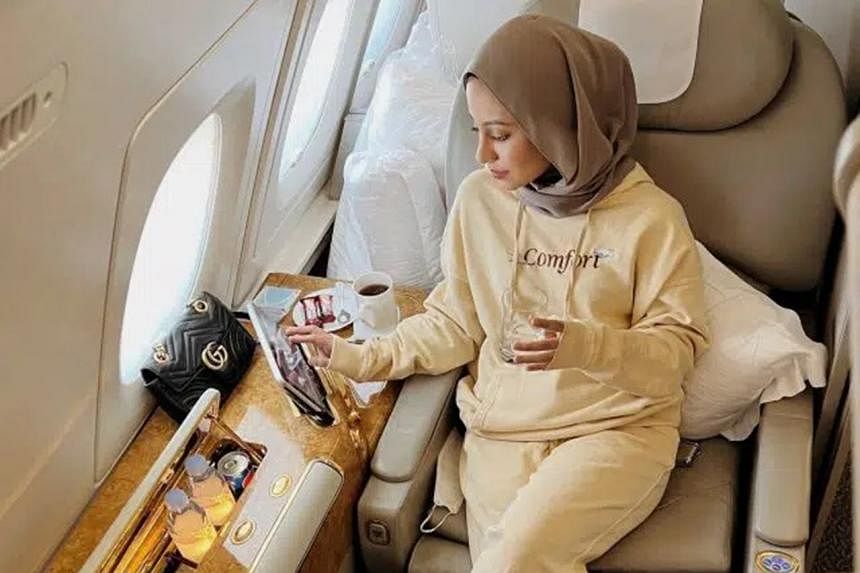 KUALA LUMPUR – A Malaysian woman who was studying at a public university has come under fire for posting photographs of herself flying first class on an Emirates flight, sparking debate on who is entitled to benefit from pro-Malay policies and whether the rich are taking advantage of them.

Many netizens said Ms Tasnim Shah, 23, appeared to be from a rich family, with some questioning if she has deprived an underprivileged student of a spot at the Universiti Teknologi Mara (UiTM).

UiTM was formed by government agency Mara – the acronym for Majlis Amanah Rakyat – for bumiputeras, who are ethnic Malay majority and indigenous natives.

Ms Tasnim reportedly posted on Twitter earlier this month that she flew first class from London to Dubai. Screenshots showed that she said it was “a self reward” for her exam results last month, and that she was “officially done with law school”.

Ms Tasnim is an influencer with more than 600,000 followers on Instagram and has her own clothing line.

She reportedly told Gempak online website: “After discussing with my family, I don’t want to prolong this issue. My advice to netizens, let’s focus on good things in this holy month (of Ramadan).”

Social activist Adam Adli told The Straits Times: “UiTM, by design, was meant to uplift the economic conditions of the poor bumiputeras through affordable tertiary education.”

When a person who can afford a first-class flight to Europe gets to enjoy the benefits of race-based policies, “it sends the wrong message, and is a huge indicator of how flawed the implementation of government policies is”, he said.

Mr Hafidzi Razali, senior analyst at BowerGroupAsia, said: “Through social media, bumiputeras who have long been cocooned by socio-political narratives are now able to see that the very system designed to uplift the poor can also be manipulated by the already well-off.”

The public is concerned that the well-off do not only have a head start, but they can also rightfully qualify for affirmative action by the virtue of their ethnicity, Mr Hafidzi said.

“This creates an uneven playing field in various aspects, particularly so in economic opportunities,” he added.

The New Economic Policy (NEP), introduced after the deadly 1969 race riots, was aimed at redistributing the nation’s wealth – mainly through quotas, discounts and other preferential treatment for bumiputeras in areas such as education, property ownership and business.

But some Malays have begun to question its merits, believing that a small cluster of rich Malay individuals and their families are exploiting the privileges at the expense of the poor.