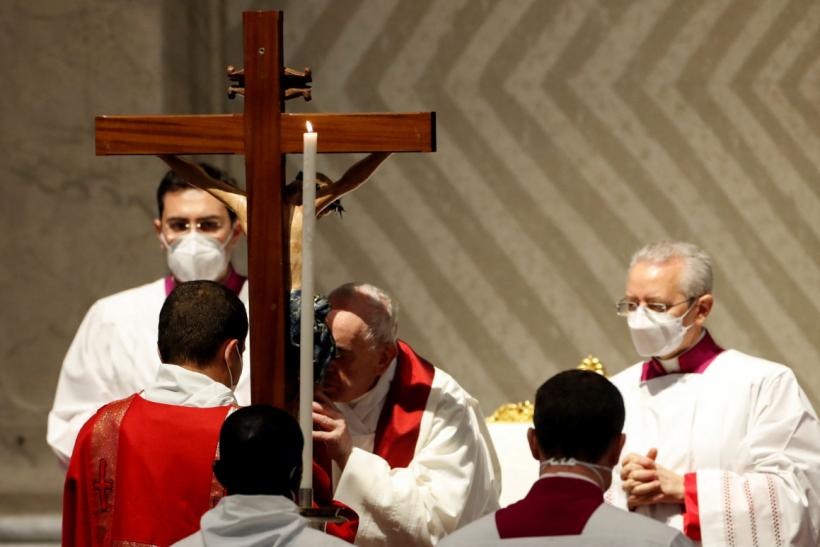 Pope Francis presided at a solemn Good Friday service recalling the last hours in the life of Jesus, with the shadow of the war in Ukraine hanging over the most sombre day in the Christian calendar.

Francis, 85, who has been suffering from a recent flare-up of pain in his knee and legs, walked with a limp along the main aisle of St. Peter’s Basilica at the start and end of the service, known as The Passion of the Lord.

However, he did not prostrate himself on the marble floor as he has at the start of similar past services. He instead stood for a few minutes with his head bowed.

Francis later sat while cantors and a choir sang gospel verses recounting events from Jesus’ arrest to his burial.

The Good Friday service is one of the few events where the pope does not deliver a homily, leaving it to the preacher of the papal household, Cardinal Raniero Cantalamessa.

“This year we celebrate Easter not to the joyful sound of bells, but with the noise in our ears of bombs and explosions not far from here,” Catalamessa said, referring to the war in Ukraine.

Paraphrasing the biblical peace call to “beat your swords into plowshares and your spears into pruning hooks,” Cantalamessa spoke of beating “missiles into factories and homes”.

On Friday night, Francis was due to preside at a candlelight “Via Crucis” (Way of the Cross) procession at Rome’s Colosseum.

This year, the Vatican’s decision to have both Ukrainians and Russians take part in one part of the the procession has caused friction with Ukrainian Catholic leaders, who had called for it to reconsidered.

On Saturday evening Francis will lead an Easter Vigil Mass in the basilica.

On Easter Sunday, the most important day in the Christian liturgical calendar, he will say Mass in St. Peter’s Square and then deliver his twice-yearly “Urbi et Orbi” (to the city and the world) message and blessing.