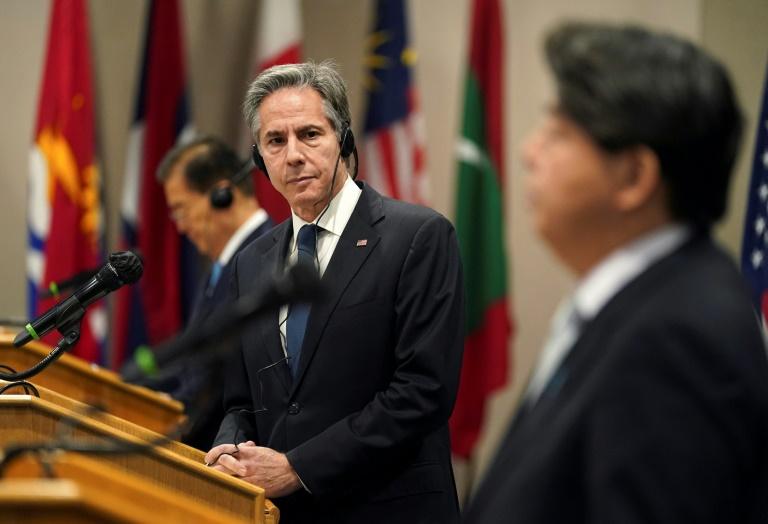 US Secretary of State Antony Blinken and his Japanese and South Korean counterparts declared their unity on confronting security threats in the Asia-Pacific Saturday, even as Washington was intensely occupied by the possibility of war in Eastern Europe.

Washington organized the meeting as the third stop of a pan-Pacific round of diplomacy meant to reassert the on-off US “pivot” to Asia in politics and security.

Blinken first attended a meeting of the Quad in Melbourne, the alliance of Australia, Japan, India, and the United States aimed at blunting Beijing’s expansive military policy in the Asia-Pacific.

The top US envoy then traveled to Fiji for a virtual meeting of representatives of 17 Pacific Island nations who are also experiencing China’s economic, political and military ambitions.

US officials said the trip was to assure countries across the region that Washington is still deeply attentive to their issues.

During the weeklong trip, the White House released its strategy for what it has rebranded the “Indo Pacific region,” an 18-page document that stresses the centrality of the region in US policy.

“That strategy reflects the fundamental truth that more than any other part of the world, what happens in this region is going to shape the lives of Americans and people around the world,” Blinken said in Honolulu Saturday to close out the week.

At every stop, however, the threat of a Russian invasion of Ukraine had nearly all of Washington’s attention, and drew concerns from its counterparts.

Blinken spent much of his travel time liaising with allies and his Russian counterpart, Sergei Lavrov, on the crisis.

And at each press conference, meant to showcase the US’ dedication to Asia-Pacific affairs, attention instead fixed on Blinken’s statement that Russia could attack Ukraine within days.

Yet Blinken’s message was well-received.

In Melbourne, four Quad countries sought to deepen their alliance, expanding it from the original Malabar naval exercises and Covid vaccine distribution to other areas including climate change, cyber security, infrastructure and disaster relief.

They also underscored in repeated statements that they were ready to work with ASEAN, the Association of Southeast Asian Nations, right in the center of the Chinese advance.

In Fiji, Blinken said the US was ready to spend more money to support the Pacific Islands, and announced the restoration of a US Embassy in the Solomon Islands, where China is now embroiled in politics and local security.

The US closed its embassy in the Solomons in 1993, and reopening it would serve as a statement that America will pay more attention to the often overlooked region.

The Pacific islands stop, said Jonathan Pryke of Australia’s Lowy Institute, is “a reflection that the US just doesn’t have a significant presence in the Pacific.”

“The US is clearly anxious about China’s growing presence in the region,” he said, calling Blinken’s visit “pretty significant.”

The possibility of a Russian invasion of Ukraine also filtered into the tripartite talks in Honolulu.

The war would cause economic disruptions that could reach Asia. Japan has already been asked to allow some of its LNG supplies to be diverted to Europe in the case that Russian natural gas to Europe is cut off.

But Japan and North Korea want Washington to put more effort into bringing North Korea’s Kim Jong Un to the table, after his seven recent test launches of ballistic missiles.

Blinken said Kim was in “a phase of provocation.”

“I want to underscore we have no hostile intent for the DPRK. We remain open to dialogue without preconditions,” he said.