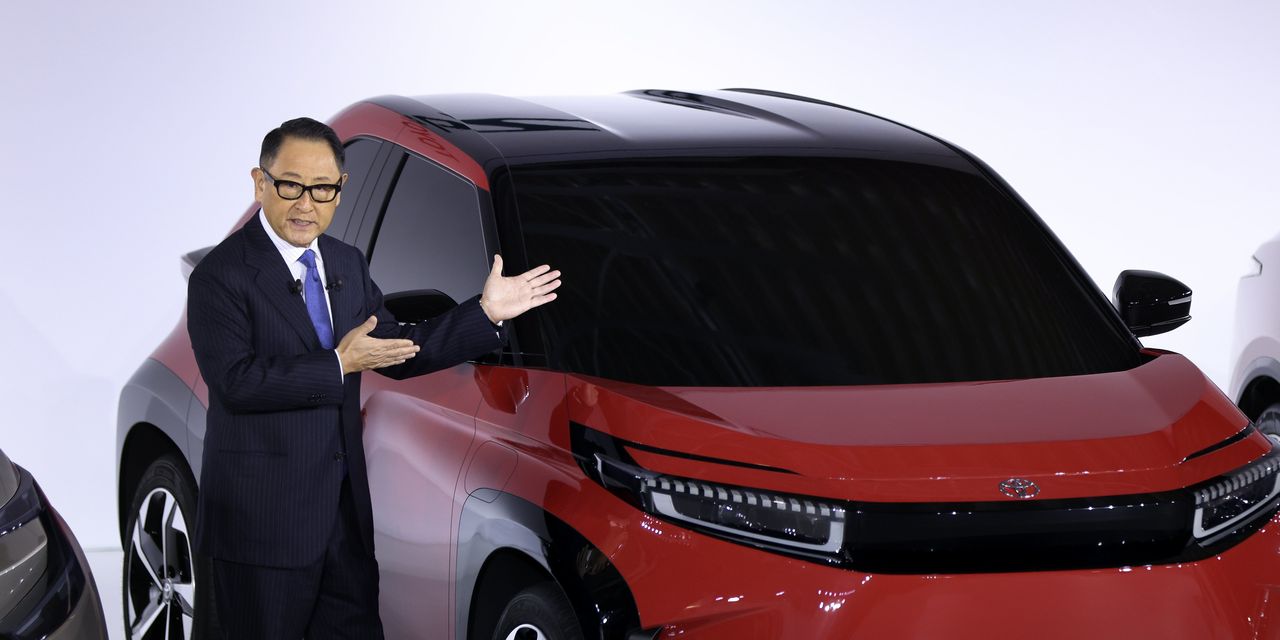 , the last voice of caution about electric vehicles among the world’s top auto makers, on Tuesday declared itself a believer and said it would make 3.5 million EVs a year by 2030.

Toyota said it wanted all models in its upscale Lexus brand to be electric by 2030 in the U.S., China and Europe. And it showed off more than a dozen of the 30 EV models it intends to have on sale by that year.

Still, it cautioned that many of its customers, especially in the U.S. outside the coasts, weren’t ready yet for a battery-powered car and might not be for some time.

It was just seven months ago, in May, that Toyota set a target of selling around two million electric vehicles by 2030. On Tuesday, it nearly doubled that target, citing the November climate summit in Glasgow, Scotland, and the Biden administration’s executive order aiming to increase electric-vehicle sales.

said at a news conference that the company felt compelled to update its plans to achieve carbon neutrality after seeing the summit. “Each country made their announcements and made clear the energy policies they had,” he said.

Until recently, Mr. Toyoda had distinguished himself with cautious remarks about EVs. He questioned whether consumers wanted to buy a battery-powered car and said EVs might not be as good for the environment as the gas-electric hybrid vehicles in which Toyota has specialized, because much electricity around the world is generated from fossil fuels.

Mr. Toyoda also warned that a hasty shift to EVs could decimate the network of suppliers for traditional gasoline-powered cars, a scenario in which “the current business model of the car industry is going to collapse,” he said in December 2020.

On Tuesday, such skepticism was mostly shelved.

Mr. Toyoda praised EVs as fun to drive, and he showed a video of himself laughing as he hit the accelerator while driving a Lexus EV in development. “A different world! Wheeee!” he said in the video.

At the news conference, he said, “The efficiency of an electric motor is far beyond a gasoline car.”

“We’re not saying we will use it all up. This is an indication that we are ready,” said technology chief

Lexus is set to become an all-electric brand globally by 2035, and the planned models include a sports car that will go from zero to 60 miles an hour in two seconds.

Nonetheless, Toyota’s shift to EVs is slower than some competitors. Mr. Toyoda said that was because of a lack of charging infrastructure and electricity supply in many of the countries where Toyota sells cars.

, the car maker closest in size to Toyota, plans for half of its sales to be EVs by 2030. Luxury maker

is aiming for its Mercedes-Benz brand to go fully electric by the end of the decade.

In the U.S., Toyota said it believed it could sell electric cars to people living on the East Coast or West Coast. “They will have a preference for environmentally friendly vehicles, and they have good infrastructure,” said Mr. Maeda, the technology chief. “But when you go into the Midwest, the usage environment will be different. It will be tough to shift immediately to battery EVs.”

Toyota’s design chief, said the company needed to keep in mind the gap between what people say they want and what they actually buy. While most people agree that carbon neutrality is desirable, “whether they’re willing to accept that in practice is the next big hurdle,” he said. “We will have to change the way of customer thinking. Then, perhaps, we can achieve the sorts of numbers that are being talked about.”

In the 1990s, Toyota developed the high gas-mileage Prius, combining a gasoline engine and electric motor in an innovative hybrid design that established its environmental credentials. More recently, however, its reputation has taken a hit over its seeming reluctance to match the rest of the industry’s enthusiasm for battery-powered cars. Toyota has urged governments including the U.S. to exercise caution in promoting EVs.

Mr. Toyoda acknowledged that some people might criticize the company for not committing to a higher proportion of its sales, but said he didn’t think the criticism was fair. Three-and-a-half million vehicles is a big number, equivalent to the entire output of a company such as Daimler, Mr. Toyoda said. “This kind of company’s size: That’s the size and volume we’re talking about,” he said.

The Future of Everything | Transportation

Write to Sean McLain at sean.mclain@wsj.com