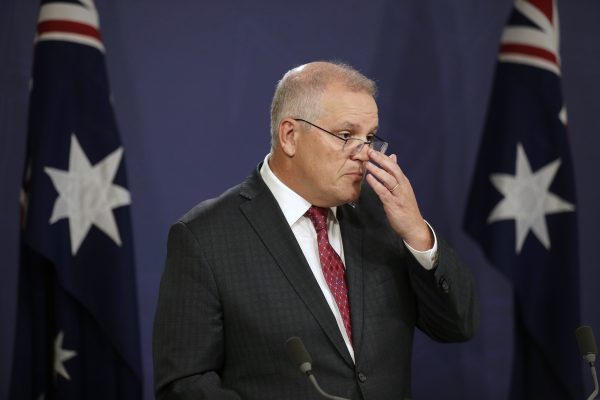 The Pacific is playing an interesting role in the May 21 Australian election, as it has throughout the prime ministership of Scott Morrison. Morrison is going into this election campaign with what Australians might term “lead in his saddlebags.” That electoral “lead” can be refracted through three Pacific images that not only bookend, but define, Morrison’s government since he won election, defying most opinion polls, on May 18, 2019. Three years later, Morrison faces a beleaguered Australian electorate and very different prospects.

Morrison was riding high on his 2019 election win until December 2019. Then Australia was ablaze with fires that over several months and across six states burned over 17 million hectares (about the size of Florida), destroying over 3,500 homes, killing 33 people and an estimated 1 billion animals, and belching over 700 million tons of carbon dioxide (130 percent of its usual emissions) into the atmosphere in thick clouds of smoke that traveled around the planet. While many Australians traveled to beach locations for Christmas, where thousands became trapped in apocalyptic situations when more fires erupted and encircled scores of beach communities, Morrison went missing. A few days later, headlines proclaimed that Morrison was holidaying with his family in Hawai’i, where he remained until the terrible optics of the situation finally sunk in. Morrison returned to face an enraged populous.

The Hawai’i family vacation has dogged Morrison ever since. He, and most controversially his wife, continue to apologize for it. Images of Morrison relaxing in a bar and doing the Hawai’i “hang loose” hand gesture, snapped by the tourists who discovered him in Waikiki, continue to do the rounds.

Yet the images most often attached to Morrison’s Hawai’i holiday story are ones that are embedded in another Pacific story, that of climate change. These are photographs of Morrison wearing a fou (a Tuvaluan flower garland) when he attended the August 2019 Pacific Islands Forum meeting in Tuvalu. Here he was greeted by Tuvaluan children immersed in water, symbolizing the rising sea levels that threaten every Pacific Island nation, making it the foremost issue in the region. In August 2019, Morrison angered Pacific nations due to his ongoing protection and support of Australia’s coal industry (Morrison famously brought a lump of coal into Parliament in 2017). Three years on, it is not just the Pacific region angered by Morrison’s unchanged coal-loving stance. Most perilously for Morrison, it is now also the Australian electorate he will have to answer to on this critical issue.

In this election the government’s COVID-19 response and economic performance are going to influence voter decisions. Morrison also has a serious handicap going into this election with many women that may affect the results. This may also be the case with Morrison’s tough stance against China. In some electorates, this may help. In others, those with high Chinese voter numbers, it may hurt as shown in a recent electoral litmus-test where voters deserted Morrison’s Liberal party with its anti-China rhetoric. But arguably there is one issue that is going to cut through as 2022 is looking very much like Australia’s climate change election.

Australians are concerned about global warming and its impacts globally. But recent events have, like the fires of two years ago, brought home to millions of Australians that climate change is the issue of the moment. Since February 2022, catastrophic floods have wreaked havoc all along Australia’s east coast. Cities like Lismore, my dad’s hometown, that are used to floods have never seen anything like the over 14 meters (nearly 46 feet) the Wilson River rose in late February. A month later, with the biblical-scale rains continuing, Lismore flooded again as did many other areas along the coast in the week before Morrison finally called the election.

When Lismore first flooded, Morrison was in quarantine, having contracted COVID-19. Yet he took one week to declare a state of emergency and release desperately needed resources to the area. The urgent battle to save lives in Lismore fell too much onto the shoulders of local people (and notably Pacific Island guest workers), reminding the public of the abject failures of the 2019-2020 fires, particularly of Morrison’s Hawaiian absence. Only days before the floods, Morrison put his ill-fated association with Hawai’i back in the front of the public mind by appearing in a 60 Minutes profile, playing an instrument synonymous with the place, the ukulele, and singing a 1970s New Zealand pop classic (and not well).

The searing experiences of millions of Australians enduring climate change’s effects over the past three years is one component of Morrison’s upcoming electoral challenge. The other is the mobilization of highly effective political opponents in once safe Liberal seats that are going to contest high-profile government members. This is making these prominent men nervous for the first time in their political careers.

In 2019, independent candidate Zali Steggall ran against former prime minister and climate change denier Tony Abbott in his once-safe seat of Warringah, which takes in Sydney’s northern beaches. Steggall not only won the seat, ejecting Abbott from Parliament in the election that Morrison won overall, but she launched a movement.

Lessons learned from Steggall’s 2019 campaign have been applied in five once-safe Liberal seats. The formula is to run prominent, conservative women candidates, a pointed comment on the deficit of women in Morrison’s government and his ongoing problems with women. These women then campaign on local issues but also put climate action on the top of their agenda. These independent candidates are promising to shake up the arithmetic of Parliament. The Australian Parliament has 151 seats, with 76 seats needed to form government. Morrison’s coalition government holds 77 seats going into this election; the Australian Labor Party (ALP) has 68, with six seats held by other parties.  The ALP in contrast, is treading a fine line on coal and climate. In some seats, being strong on climate action is going to help as the ALP tries to hold votes that might otherwise go to the Greens. In other seats, especially marginal seats where coal is mined, as in the seat of Hunter in New South Wales that takes in a large swath of the city of Newcastle, climate issues will be carefully calibrated to suit local constituents. It will be a difficult and high stakes dance.

There are no higher stakes in this climate change election than for the Pacific Islands. That point has been made by a Pacific Islander protest in the port of Newcastle where coal mined in the Hunter electorate gets exported to the world. Here a flotilla of canoes tried to block the massive tankers transporting their polluting quarry.

Morrison has paid attention to the islands and has made the term “our Pacific Family” a regular part of his government’s parlance and approach to the region. But his lack of action on global warming makes the sentiments embedded in these words hollow. Pacific nations consistently call out Australia’s lack of climate action despite the Pacific’s clear and urgent message about what needs to be done. For the region, the Morrison government’s resistance to the Pacific pleas on climate change weakened Australia’s influence in the Pacific Islands.

The most poignant case in point was when the Solomon Islands Prime Minister Manesseh Sogavare, addressed his parliament on March 29, 2022. He was speaking about the controversial security deal his government had just brokered with China, a development that “changes everything” in Indo-Pacific geopolitics. Sogavare made particular note of the lack of climate action (he was clearly referring to Australia) as an underlying cause for why his country was turning to China. There are many causes behind this China-Solomon Islands deal, but the point is that the Morrison government has handed a region, tired of empty words, a stick that is being wielded with painful effect.

The China-Solomon Islands security deal is the final, defining, Pacific bookend of Morrison’s government. It speaks to a series of missteps and lost opportunities that have untold implications for Australia’s security and will no doubt bedevil whoever wins the May 21 election.