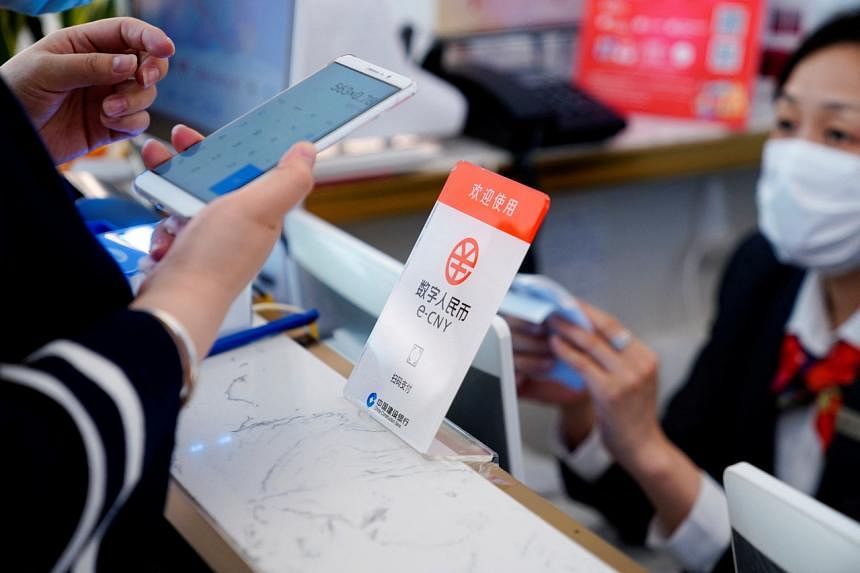 BEIJING (CAIXIN GLOBAL) – In three years of experiments, China’s central bank has made significant progress in developing its central currency.

Total transactions since late 2019 reached 83 billion yuan (S$16.8 billion) as of the end of May. Nearly 4.6 million merchants across China have come to accept the digital yuan, known as the e-CNY, as payment. People have used it for shopping, dining, personal finance and business uses such as paying taxes and employees.

For all that, the People’s Bank of China (PBOC) still has a long way to go in its digital currency project. Use of the e-CNY in pilot programs is a drop in the bucket compared with the volume of commerce conducted using China’s two dominant mobile payment systems – Ant Group’s Alipay and Tencent’s WeChat Pay. Alipay’s monthly transactions alone averaged 10 trillion yuan in 2020, the company disclosed.

To bridge that gap, a large amount of investment in technology will be required. Achieving the second-by-second payment processing capacity needed to handle the massive volume of transactions in China’s economy will mean spending billions of yuan to build data centres and add servers and bandwidth, Caixin learned.

Expanding the PBOC’s pilot programs and application scenarios will create demand for software and hardware upgrades at financial institutions as well as opportunities for smart hardware consumption, attracting more capital into the emerging sectors. At the same time, the central bank will have to establish and amend regulations as the current rules covering finance, taxation, accounting and statistics based on a physical currency will no longer be applicable with the digital yuan.

At a meeting on Aug 1, the central bank vowed to further expand trials of the digital currency. Currently, the e-CNY is being tested in 23 cities and regions in 15 provinces and provincial-level cities. But the expansion will face challenges as Chinese consumers are already used to the convenience of Alipay and WeChat Pay.

The main purpose of the pilot program is to build confidence in the digital yuan’s reliability and ease of use, said Mu Changchun, the head of the central bank’s digital currency research institute. The digital yuan is a legal currency issued by the PBOC and backed by the government, Mu said.

No matter what form it takes, a currency has three main functions: as a store of value, a unit of account and a medium of exchange. For consumers, the most basic function is as a medium of exchange or payment. The central bank’s digital currency research institute set its goal for the e-CNY to quickly reach the same experience as all other payment tools in the market, Mu said.

Central banks have two options for digital currencies: a wholesale central bank digital currency (CBDC), mainly issued to institutions such as commercial banks and mostly for large-value transactions, or a retail CBDC issued to individuals and businesses for daily transactions. From the beginning, China aimed for a retail currency. The main purpose of developing the digital yuan is to meet needs for domestic retail payments and improve financial inclusion, according to PBOC Governor Yi Gang.

The e-CNY will fully meet the public’s daily payment needs, further improve the efficiency of the retail payment system and reduce costs, the central bank said in a progress report in July 2021.

Promotion of the digital yuan started with money giveaways by local governments for shopping. Shenzhen, one of the first pilot cities, in October 2020 handed out 10 million yuan of e-CNY to the public that could be spent at restaurants and shops. Other pilot cities followed suit.

In May, Shenzhen distributed an additional 30 million yuan of e-CNY to local residents in a joint promotion with food delivery platform Meituan Dianping. During the project, more than 520,000 merchants on the platform accepting e-CNY reported that orders increased by 58.9 per cent and transaction amounts by 64.6 per cent from the same period a year earlier.

The challenge now is how to improve the e-CNY’s use and stickiness with users and merchants, officials said. Salary payments and other corporate transactions can help expand its use. When people get paid in digital yuan, they have to spend it, the PBOC’s Mu said.

In the next step, the central bank will promote deeper e-CNY integration for the public and for personal business; support fund management and salary payment services for micro, small and medium-sized enterprises; and back public sector services such as taxation and government transactions, said Fan Yifei, a PBOC deputy governor.

Use of the digital currency has been extended beyond consumption. Since June, state-owned China Construction Bank has been allowing customers to use the e-CNY to purchase wealth management products. On June 10, a customer purchased the first auto insurance policy using the e-CNY.

The PBOC has also explored innovative e-CNY applications. During a pilot program, smart contracts were used to make the e-CNY programmable, more expandable and better integrated into various scenarios, the central bank said.

In pre-paid consumption, such as long-term apartment rental platforms and tutoring businesses, there have been multiple cases in which owners of failed businesses absconded with consumers’ pre-paid funds. The digital yuan is believed to have the capacity to help prevent such thefts.

Under such digital yuan-based custody models, consumers’ prepaid funds are stored in personal digital wallets, and only the actual amounts being consumed are released to merchants. This effectively defuses the risk that business owners will vanish with customers’ funds, Mu said.

In the future, consumers may use prepaid funds in digital wallets to buy wealth management products, and banks may provide loans and other financing for merchants, which will improve efficiency, Mu said.

To reduce competition with bank deposits, e-CNY funds pay no interest and circulate in the same way as the physical currency in a two-tier system under which the PBOC issues currency and commercial banks exchange e-CNY for the public. To increase public acceptance of the e-CNY, the central bank currently does not charge fees to banks and other operating institutions for the conversion and circulation of the digital yuan, and institutions do not charge customers for conversion.

The central bank has never promised that the digital yuan will always be free for merchants. An industry researcher said it’s not realistic to keep the use of digital yuan free in the long run. “The e-CNY has not been fully marketised and is still in the pilot stage,” the researcher said. “We will gradually explore a healthy and sustainable business model.”

To give full play to the two-tier operating structure, it is necessary to adhere to a market-oriented development and allow market institutions to participate in the system in a healthy and sustainable way, requiring an incentive mechanism, Mu said. The digital yuan is free for individual consumers, but banks can charge fees to other operating institutions, such as insurance companies and online platforms, which then can charge fees to merchants, Mu said.

Caixin learned that related rules are in the works and that future regulations will set a cap for such fees.

Compared with large banks and internet companies, small and medium-sized enterprises will benefit more from the expansion of the e-CNY in the short term, said Cao Senyuan, an analyst with Zhongtai Securities.

In the process of promoting the digital yuan, two categories of demand will emerge: Banks will need to transform and upgrade their digital currency systems, and applications will need to be created in finance, government affairs, credit, taxation, agriculture, supervision and other areas, Cao said.

Shenzhen Techo Telecom, a financial cloud platform business, is one of the industry pioneers exploring digital currency. It set up a subsidiary-Shenzhou Fangyuan-to develop innovations based on various applications for the e-CNY.

As a technology provider at the Beijing 2022 Winter Olympics, where the digital yuan was tested, Shenzhen Techo helped banks to build and test systems. In the future, the company will explore applications for the digital yuan in multiple scenarios such as prepaid cards, logistics, supply chain finance, government affairs and taxation, property rights deals, and enterprise services, said Dai Ke, deputy general manager of Shenzhen Techo.

As the e-CNY is China’s official currency, existing international standards and Chinese laws against money laundering and financing terrorism apply. The job of protecting consumers’ rights and interests in the e-CNY system are the same as for physical cash.

However, regulatory measures and requirements for the e-CNY need to be tailored, the PBOC said in its progress report. At a March meeting, the PBOC called for forward-looking legal structures to ensure the security of the digital yuan. China plans to tighten legislation around the digital yuan to protect user privacy and combat illegal activities such as money laundering and terrorist financing, Mu said in a July speech at the 5th Digital China Summit.

To guarantee the anonymity of the digital yuan, authorities plan to improve regulations, including establishing a mechanism to regulate the use of customer information so that operating institutions will be able to apply for access to user information only for risk analysis and monitoring when illegal transactions are suspected, Mu said.