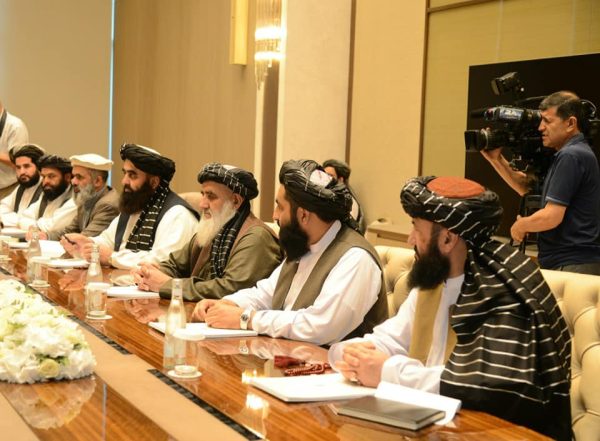 For the first time since the Taliban’s takeover of Kabul in August 2021, members of the international community entered into a constructive dialogue with the de facto government in Afghanistan, albeit with preconditions. Representatives of more than 20 countries and international organizations attended the Tashkent Conference on Afghanistan held between July 26 and 27, upon invitation from Uzbekistan’s President Shavkat Mirziyoyev. It was the second such inter-regional dialogue hosted by Mirziyoyev since he took office in 2016.

The conference allowed the international community a concerted opportunity to set out clear expectations from the Taliban as part of their negotiation process, an important reminder that is believed to have come at a critical moment in time. The formation of an inclusive government on the basis of the “broad representation” of all ethnic, religious, and political groups was underscored, and senior delegates such as the European Union’s Special Envoy for Afghanistan Tomas Niklasson and the United States’ Special Representative for Afghanistan Rina Amiri reiterated after the conference their complete rejection of recognizing the Taliban without clear guarantees of the protection of basic human rights within Afghan territory.

Nevertheless, organized with the primary objective of promoting regional security and connectivity in South and Central Asia, the conference placed an emphasis on the economic development of Afghanistan, and played a corresponding role in pushing toward the eventual normalization of relations between the international community and the Taliban. Such intentions were confirmed by the emboldened position of the leaders of the militant organization in asserting their plans for bringing prosperity to Afghanistan and demanding the reestablishment of direct ties from Western countries. The high level of international participation, especially from the United States, Russia, China, and Pakistan, gave the talks greater credibility and was interpreted by many observers as a step in gradual consensus-building about the Taliban-controlled region.

The geographical location of Afghanistan provides it with great strategic importance, and after a year of failed deliberation on the future of the country under the Islamic Emirate, leaders of various nations have relaxed their resistance to engaging with the Taliban. For others, such as Canada, the undesirable outcomes of their policy of non-recognition are unfolding as blacklists, sanctions, and natural disasters pile up alongside the general economic insufficiencies of a rentier state decades in the making, thereby impairing the ability of both the de facto government and international organizations to provide urgent humanitarian assistance to victims. Despite regular demands for the reinstatement of basic freedoms and women’s rights, authorities of the Islamist organization feel decreasing pressure as some countries involved in the negotiation process remain more focused on promoting their economic interests than upholding human rights.  Even without formal diplomatic recognition, any degree of acceptance of the Afghan state of affairs within the international community could create an atmosphere of openness toward the Taliban.

The Tashkent Conference served as a gateway to the gradual integration of the Islamic Emirate of Afghanistan into the regional economic and trade systems. In the presence of major world powers, the United Nations, European Union, and the Organization of Islamic Cooperation (OIC), plans for the implementation of infrastructure projects in energy and communication, including the Uzbek-proposed Trans-Afghan railway connecting Uzbekistan’s border to northern Pakistan, were developed. If successful, this could attract millions of dollars in funds from governments and global financial institutions, including the U.S. International Development Finance Corporation and the World Bank.

On the political level, the Taliban were also able to gain some concessions in the form of “zero tariff treatment” on Chinese imports of Afghan products and the Temporary Admission Document (TAD) to facilitate their coal exports to Pakistan for power generation purposes. Other subjects of mutual interests and untapped avenues of cooperation were also discussed between the Taliban and Pakistan in a meeting on the sidelines of the Tashkent Conference. Bilateral dialogues between the representatives of participating countries and the Special Representative of the United Nations Assistance Mission Markus Potzel further confirmed a consensus on continued support for stability and economic prosperity in Afghanistan.

The United States, for its part, expressed an unprecedented readiness to discuss unfreezing $3.5 billion in Afghan assets with the Taliban. Authoritarian regimes must pursue a degree of popular consent to complement coercion, which can be enabled by real or perceived prosperity and material advancement. Over the past year, one of the most challenging factors facing the Islamic Emirate in improving living standards, besides lacking experience and training in the management of state institutions, was the unavailability of sufficient resources. Now, with the looming possibility of Afghanistan’s gradual economic integration in the region, handing over frozen assets to the Taliban could substantiate their claim to international legitimacy and strengthen their authority over the country.

The situation in Afghanistan is also critical for the internal stability of its neighboring countries; the country has an active presence of jihadist organizations such as the Islamic State in Khorasan Province (ISKP) and the Islamic Movement of Uzbekistan (IMU), who have recently launched attacks on Uzbekistan and Tajikistan from Afghan border regions and endanger their national security. The Taliban, therefore, gain a part of their support from the two countries through promises to prevent Afghan territory from being “used against anybody or any country” by terrorist groups. The organization will similarly be held liable for violations of the security of lenders and investors financing infrastructure projects in progress within its boundaries.

S. Frederick Starr, an American expert on Russian and Eurasian affairs who attended the Tashkent Conference, has described the emerging trade and economic ties with the Taliban as a test of their intentions and sincerity. If proven successfully to the international community, it could eventually lead to a gradual improvement in relations.

Regardless, the Taliban have established diplomatic ties, albeit below the level of formal recognition, with at least 10 countries, including China, Iran, Pakistan, Malaysia, Uzbekistan, Saudi Arabia, and Qatar, some of which have agreed to allow Afghan embassies to follow the directives of the Taliban’s Foreign Ministry in the organization of consular affairs. Four states – Turkmenistan, Russia, China, and Pakistan – have allowed the presence of formally accredited Taliban diplomats. Such intensifying political closeness of certain countries with the Islamic Emirate could foreshadow the future involvement of Afghanistan in their geopolitical ambitions. Russia, Iran, China, and Pakistan have already accused the West of promoting terrorism in Afghanistan through their sanctions against the Taliban, which restrict the group’s counter-offensives against the National Resistance Front and ISKP, whose number of fighters has tripled since last August.

Ultimately, the demands for concessions on human rights issues will hold less leverage in negotiations motivated by economic interests. Conversely, the Taliban’s future commitments to human rights principles may not have much bearing on its ability to contribute to the regional stability and development of Central Asia, an outcome that will inevitably weigh more than any commitment to values in current-day international relations.