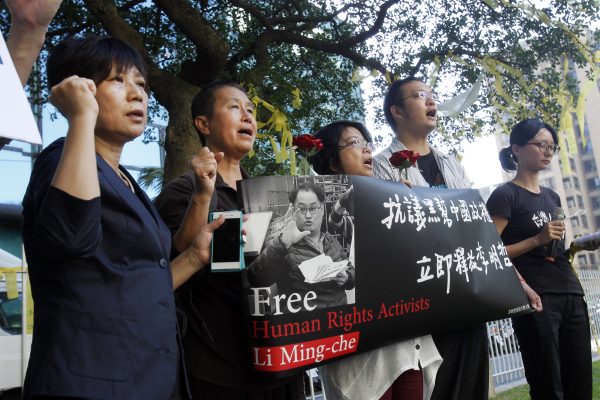 Taiwanese human rights advocate and NGO worker Lee Ming-che was freed earlier this week, returning to Taiwan by plane on April 15. This ended five years of detention in China for Lee, who crossed to the mainland from Macau in March 2017 and was subsequently detained by authorities.

Lee was detained on charges of “subverting state power” and is thought to be the first Taiwanese detained on such charges. At the time, his detention was thought of in the context of laws passed by the Chinese government regulating foreign NGOs. After the arrest of Canadian nationals Michael Kovrig and Michael Spavor in retaliation for the detention of Huawei CFO Meng Wanzhou, advocates for Lee’s release sought to frame his arrest as a similar act of cross-strait retaliation, seeing as the two Michaels were NGO workers, too.

Lee, who was a staff member at the Wenshan Community College in Taipei, had been a volunteer for Taiwanese NGOs monitoring cross-strait trade agreements such as Covenants Watch, something that took on increased significance in the years after the 2014 Sunflower Movement. The Sunflower Movement involved student-led protests against a cross-strait agreement that was to be signed with China. Likewise, Lee had a history of activism in the 1990s, during the process of Taiwan’s democratization.

The precise reasons for Lee’s detention in 2017 remain opaque. Lee is thought to have been detained because of online exchanges with Chinese friends about Taiwan’s democratization. This included weekly lectures on topics such as democracy and transitional justice, which he delivered to a primarily Chinese audience through WeChat. If these interactions really were the reason for his detention, it would have implications for cross-strait law. Legal experts have pointed out that the online exchanges may have, in fact, taken place while he was in Taiwan.

However, Lee was also a former Democratic Progressive Party (DPP) worker. Lee’s stint in the DPP took place after a period of working in the pan-Blue New Party, suggesting that Lee’s political views changed at some point in his life – Lee was from a family of “mainlanders,” among those that came with the KMT to Taiwan after the Chinese Civil War. Given his DPP background, Lee’s detention could have been intended to send a message to the Tsai administration, coming at a time when the disappearance of the Causeway Bay booksellers – particularly Lam Wing-kee’s escape from Chinese custody – was a recent event.

Before Lee’s release, Taiwanese civil society groups that had been calling for him to be freed from jail raised the possibility that he would remain detained in China after the end of his five-year prison sentence. Lee’s sentence stated that he would be deprived of his political rights for two years. In cases of foreigners who are arrested in China, they are usually sent back to their home countries immediately after the end of their sentences, as they do not have rights to political participation in China.

Yet it was less clear how this sentence would apply to individuals from Taiwan, Hong Kong, or Macau, as there are relatively few legal precedents for this. There was some ambiguity about the timeline for Lee’s release, as well. While the Chinese government normally informs family members of impending jail releases by mail, there have been some delays in delivering such letters due to the effects of COVID-19.

While Lee Ming-che was in detention, there were a number of incidents where the Chinese government sought to retaliate against his wife, Lee Ching-yu, for advocating for his release. Lee Ching-yu was prevented from visiting her husband 16 times in five years. Lee Ching-yu was blocked from traveling to China on some occasions and refused the right to bring medication to her husband, though this is permitted for spouses according to Chinese law.

The Chinese government alleged that Lee Ching-yu was misrepresenting the conditions of her husband’s imprisonment, as Lee Ching-yu asserted that Lee Ming-che was fed spoiled food, had his warm clothing thrown out, and was forced to work 10 hours a day. Moreover, Lee Ching-yu stated that her husband received letters six months after other prisoners and had his bank account frozen.

One particular incident that may have drawn the Chinese government’s ire was during a court session in September 2017 in which Lee Ming-che confessed to all charges. Lee Ching-yu attended, revealing tattoos on her arm that read “Lee Ming-che, I am proud of you.” Lee Ching-yu had the tattoo work done after traveling to China, presumably to prevent it from being detected ahead of time.

At one point, Lee Ching-yu was contacted by a Taiwanese man, Lee Chun-min, purporting to be able to negotiate Lee Ming-che’s swifter release if she kept quiet and stopped advocating for his release. Lee Chun-min, who claimed to be acting as a go-between for China’s Association for Relations Across the Taiwan Straits (ARATS), had himself been arrested on espionage charges in China years earlier and served as an aide to KMT legislator Alex Tsai after being released. Tsai later denied any contact with the Chinese government on the matter while acknowledging that he knew of a “friend’s” involvement. ARATS did not clarify Lee Chun-min’s involvement or lack thereof.

Lee Ching-yu refused to drop open advocacy for her husband’s release, though this led to splits within the Lee family between Lee Ching-yu and her husband’s parents, with Lee’s mother calling on her son to “apologize to the Chinese nation.”

After his return to Taiwan. Lee Ming-che declined to speak with the press but issued an open letter. In the letter, Lee thanked those who were concerned with his detention, stating that this had been a source of strength in trying times.

In his letter, Lee struck a defiant note regarding the Chinese government. “Freedom is won through struggle. This was learned by Taiwanese during the authoritarian period, with blood exchanged for freedom,” he wrote. Lee then went on to state that the Chinese people would come to “know and learn this,” emphasizing elsewhere in the letter that “there are still countless individuals whose human rights are being violated in China.”

In accordance with COVID-19 measures, Lee will be quarantined for 10 days, followed by a seven-day self-health management period.

Lee is free, but there remain questions about other Taiwanese who are being detained by the Chinese government. That includes businessman Morrison Lee Meng-chu, who was detained on charges of “endangering national security.” He had participated in the 2019 Hong Kong protests, and possibly had photos of the protests on his cell phone at the time he crossed into Shenzhen from Hong Kong.

Other Taiwanese detained in China include academics Tsai Jin-shu and Shih Cheng-pin. Tsai and Shih were both members of the pan-Blue camp, with Tsai in particular being a public advocate of political unification with China. Tsai and Shih’s detention shows that it is not only members of the pan-Green camp – as Lee Ming-che or Morrison Lee could perhaps be understood – who could be politically targeted by China.

Shih’s detention took place in August 2018 but did not come to light until December 2019. Shih’s family reportedly kept quiet about the incident for fear that Shih could become a “second Lee Ming-che.” They believed that the better choice was to avoid publicity, in the hopes that keeping a low profile would lead to a swifter release. Tsai was also detained for over 420 days before this information became publicized on a pan-Blue talk show by a fellow academic, due to the fact that family members sought to keep quiet.

This raises the possibility that other Taiwanese could be currently detained in China, particularly if their family members are staying quiet. While current statistics are unknown, Taiwan’s Mainland Affairs Council (MAC) stated in 2019 that there were 149 Taiwanese citizens missing in China at the time, and that it was unable to confirm the whereabouts of 67 individuals (of course, any of these people could have suffered accidents, crimes, or other unforeseen events rather than being politically imprisoned).

The Chinese government claimed to have captured over 100 Taiwanese spies at the time of the 2019 protests in Hong Kong. It is unlikely that over 100 disappearances would have gone unreported in the years since 2019, but this claim aimed at building up the narrative that Taiwanese interference was stirring up dissent in Hong Kong, as well as intimidating Taiwan. The MAC has dismissed such claims.