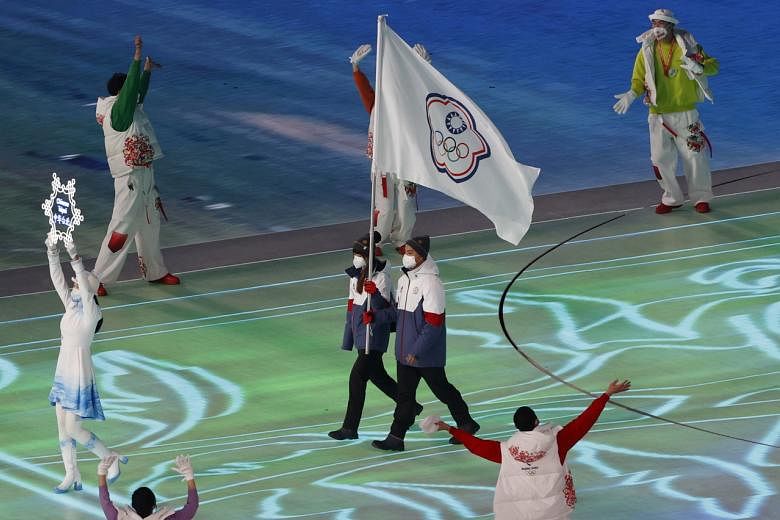 TAIPEI (REUTERS) – Taiwan’s government rebuked China on Friday (Feb 18) for using the Beijing Winter Olympics to assert its sovereignty claims over the island, saying the country had “cast a shadow” over the peaceful spirit of the event to spread “propaganda”.

China views self-governed Taiwan as its own territory, and it competes at the Olympics and most other international sports events as “Chinese Taipei” at Beijing’s insistence.

Beijing Games spokesman Yan Jiarong said on Thursday that “there is only one China”, referring to the country’s long-held stance that Taiwan belongs to China.

Taiwan’s Foreign Ministry said the official had “openly used the Olympic venue to conduct improper political propaganda”, running contrary to the Olympics Charter on not politicising the Games.

The ministry said Taiwan is Taiwan, only its democratically elected government can represent its people in the world, and it takes part in the Olympics in its own right not as part of another country.

The Chinese official’s comments had “cast a shadow over the peaceful spirit embodied by the Olympic Rings”, it said.

International Olympic Committee (IOC) President Thomas Bach, speaking earlier on Friday, said they had spoken to the Beijing organisers about the remarks immediately after the news conference where they were made.

Both the organisers and the IOC “have restated their unequivocal commitment to remain politically neutral as it is required by the Olympic Charter”, Mr Bach said.

The Chinese organisers said in response, via an emailed statement, that “Beijing 2022 complies with the provisions of the Host City Contract and the Olympic Charter and opposes the politicisation of sports”.

The spat over Taiwan, which has four athletes at the Winter Games, comes as China has stepped up efforts to limit the island’s international participation to force it to accept Chinese rule.

Taiwan took part in the Games’ opening ceremony after the team said it had received “several notices” by the IOC to attend both the opening and closing ceremonies.

Last month, it had initially said it could not attend due to delayed flights and Covid-19 rules.