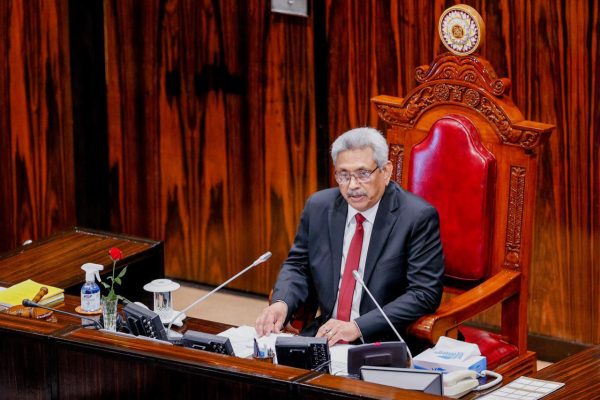 President Gotabaya Rajapaksa is willing to learn from the international community on human rights issues, he told Parliament.

Sri Lanka’s leader on Tuesday promised human rights reforms and “justice” for missing persons from the country’s civil war, after years of resisting calls for such measures.

President Gotabaya Rajapaksa was speaking before a new session of Parliament as the Sri Lankan government looks for international support in dealing with a heavy fiscal and debt crisis.

“We reject racism. What this government wants is to equally protect the honor and rights of all citizens,” Rajapaksa said. “Therefore I urge politicians who still incite people against each other for political gains to refrain from doing so.”

The Sri Lankan leader added he was willing to take suggestions from the international community on human rights issues.

Since being elected president in 2019, Rajapaksa has sidestepped calls to investigate missing persons from the civil war. Families of victims allege that many of the missing were taken by the military for being involved with separatist rebels toward the end of the conflict.

Government forces crushed the Tamil Tiger fighters in 2009, ending the movement for an independent state for minority Tamils.

Both sides were accused of grave human rights violations.

In earlier speeches, Rajapaksa has projected himself as a leader of the majority Buddhist Sinhalese and emphasized the fact that he was elected predominantly by their votes.

The Sri Lankan government’s refusal to address or investigate human rights and war crimes allegations from the civil war has been a source of tension in its relations with many Western countries and neighboring India.

Sri Lanka is currently negotiating financial assistance from India, which has 80 million ethnic Tamils itself and has looked to support the rights of minority Tamils in Sri Lanka.

Sri Lanka’s foreign reserves were around $1.6 billion at the beginning of 2022, barely enough for a few weeks of imports. Drawing from these funds, the government was making arrangements to pay for matured bonds worth $500 million this week.

The currency shortage has resulted in severe shortages of imported goods and people standing in long queues for milk powder, cooking gas, kerosene, and other essentials.

In his speech, Rajapaksa promised to reform a harsh anti-terrorism law that has been in force since 1979 that allows for lengthy detentions without trial. He also promised to return military-occupied lands from the civil war to their civilian owners.

According to initial U.N estimates about 100,000 people were killed in the quarter-century civil war. Another U.N experts panel later said that some 40,000 ethnic Tamil civilians may have been killed in just the last few months of fighting