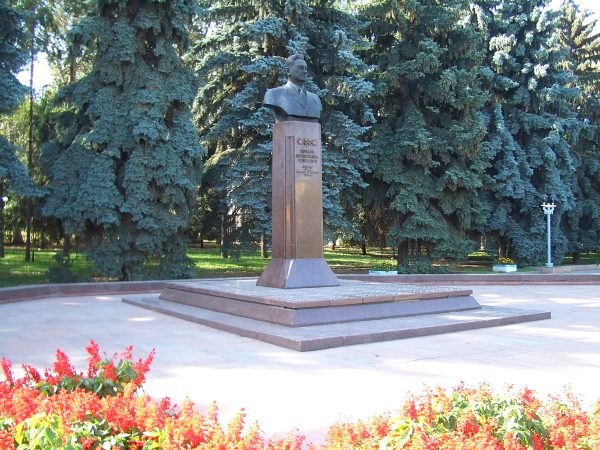 On the same day last week, authorities in Kazakhstan and Kyrgyzstan both announced the renaming of towns after Soviet-era local leaders. This is not an isolated event. Three decades after the fall of the Soviet Union, the local Soviet leadership has not only not been forgotten but, in many cases, it continues to play a role in the countries’ historical narrative.

On March 16, as part of his State of the Nation Address, Kazakhstan’s president, Kassym-Jomart Tokayev, announced a number of measures related to territorial reconfiguration. Among them, he “suggested” renaming the town of Kapshagai, in the southeast, to Kunayev, in honor of Dinmukhamed Kunayev who led the Kazakh Soviet Socialist Republic (SSR) for over a quarter of a century.

That same day, a parliamentary committee in Kyrgyzstan approved a draft law that will see the town of Isfana, in the southern Batken region, renamed to Razzakov. This is the surname of Iskhak Razzakov, the first secretary of the Kyrgyz SSR during the 1950s. The decision to change Isfana’s name was announced last December by President Sadyr Japarov, and it now is winding its way through the legal process to become a reality.

It is not the first time Kunayev and Razzakov have been honored in their respective countries. The Kazakh has had his own house-museum in Almaty (“The most attended museum of the city” according to its website) since 2002, located in front of a park that bears his name and hosts his bust. In addition, different academic institutions and streets throughout the country are already named after him. The Kyrgyz, meanwhile, was posthumously awarded the title of Hero of the Kyrgyz Republic back in 2010, and since 1992 the Kyrgyz State Technical University has also been named after him.

Kazakhstan and Kyrgyzstan are not the only countries that in 2022 are paying tribute to their Soviet ancestors. Earlier this year, Uzbekistan also honored its longest-serving Soviet leader, the controversial Sharaf Rashidov, by naming an important university after him.

Dinmukhamed Kunayev (1912-1993) was born in Almaty (back then known as Verniy) to a local functionary. A graduate of the State University of Non-Ferrous Metals and Gold in Moscow, Kunayev joined the party in 1939 and by 1942 he was already deputy chairman of the republic’s Council of People’s Commissars. He gradually moved up through the ranks, becoming first secretary of the Communist Party of Kazakhstan in 1960. Then in 1962, in a fate shared by all the Central Asian leaders at the time, he was dismissed by Khrushchev. However, two years later he was reinstated in his post by Brezhnev.

Kunayev remained at the helm of the Kazakh SSR until 1986, having been admitted to the Politburo in 1971 (only the second Central Asian to have enjoyed such a position). Kazakhstan’s first president, Nursultan Nazarbayev, owes much of his career to Kunayev, who mentored him in the early 1980s and named him chairman of the Council of Ministers (i.e. prime minister) in 1984. However, things would later turn sour between them.

Iskhak Razzakov (1910-1979) was born in the Fergana region and graduated in 1931 from the Institute of Education in Tashkent. A teacher by trade, Razzakov underwent further studies in Moscow. His career started in 1939 and during the first few years he worked in the Uzbek SSR. Then in 1945, at only 35 years of age, he became chairman of the Council of Ministers of the Kyrgyz SSR. Five years later he reached the top position in the republic by becoming the first secretary of the Kyrgyz Communist Party. A survivor of the Stalin era, he was dismissed by Khrushchev in 1961.

Bringing Back the National Soviet Leaders

For three decades now the Central Asian states have been building their own historical narratives. Each country has looked to the distant past to find their own origin as a nation and seek heroes to revere. Uzbekistan’s Amir Timur (Tamerlane) is one example. Each nation has given more or less importance to these figures and dynasties to suit their own political characteristics. While they can be used to evoke a grandiose past and a national origin, they do not address the need of having a modern statehood that spans more than the 30 years of independence. Another shortcoming is that this approach does not provide any figures that people remember being alive and thus can relate to. This is where the Soviet leaders emerge as they bridge the gap between the Soviet past and the post-independence reality.

It is not Lenin, Stalin, or similar leaders of the USSR that the Central Asian republics look back to, but their own national Soviet leaders. After the collapse of the Soviet Union the region renamed cities dedicated to foreign Soviet figures like Lenin. By linking their past to their respective Soviet Socialist Republics and, more specifically, to their local leaders, the Central Asian countries are extending their statehood tradition beyond the three decades of independence since 1991.

Not every country is doing the same, however. In Kazakhstan, Kunayev has a prominent role, and other lesser Soviet leaders like Nurtas Ondasynov (who led the government in the post-war period) also get recognition. Then-President Nazarbayev hosted an event in 2012 to celebrate the 100th anniversary of Kunayev’s birth, where he announced the capital would have a street named after him. In addition, special celebratory coins were minted for the occasion as well as stamps. The fact that Kunayev was a political mentor for Nazarbayev helps explain the extent of his commemoration.

In Uzbekistan, the figure of Sharaf Rashidov has also been honored since independence. The leader of the Uzbek SSR from 1959 to 1983 fell into disgrace after his death due his role in the “cotton scandal,” a corruption scheme that siphoned billions of rubles from Moscow. However, after independence he was rehabilitated by Uzbekistan’s first president, Islam Karimov. Instead of the corrupt figure Soviet officials accused Rashidov of being, Karimov portrayed him as someone who stood up to Moscow and defended the interests of the Uzbek people, labeling him “a true son of the land and the people.”

Current Uzbek President Shavkat Mirziyoyev has followed the same line as his predecessor, declaring in 2017 at the unveiling ceremony of a Rashidov monument in the town of Jizzakh that he was a “noble, wise and generous person, [that] despite difficult trials and difficulties, was always committed to high humanistic ideas, left good things about himself name in the memory of our people.” Mirziyoyev has also vehemently denied Rashidov’s role in the “cotton scandal.” His descendants were still connected to the Uzbek regime after independence, with one daughter having been named ombudsman by Karimov and the other being married to long-standing Minister of Foreign Affairs Abdulaziz Kamilov.

Kyrgyzstan has a different approach to the issue. While Razzakov has a certain presence, things get more complicated with his successor. Turdakun Usubaliyev ruled the Kyrgyz SSR from 1961 to 1985 but still played a role in Kyrgyz politics after independence: He was a member of parliament and also co-founded a political party. Therefore he is too recent and not a neutral enough figure to be used in this regard. However, Kyrgyzstan does pay tribute to the Kyrgyz Soviet leadership and intelligentsia that were murdered during the Stalinist purges. To that effect, the Ata-Beyit complex was built in 2000 and inaugurated by then-President Askar Akayev.

Tajikistan has not relied on its Soviet leadership as much as the other three countries, besides naming venues after some of them. Perhaps the exception is Bobojon Ghafurov, who led the Tajik SSR from 1946 to 1956 and was a historian. It is likely more because if this latter aspect that he was posthumously awarded the title of Hero of Tajikistan in 1997, and a year later his house-museum opened its doors. Most of these gestures took place in the late 1990s, when Tajikistan was just past its civil war and President Emomali Rahmon was only starting to cement his power in the country. It now would seem there is no need for any Soviet leaders that can cast a shadow on Rahmon. Recently, the authorities have not been so kind to some of these figures, as in 2017 when they secretly reburied the remains of the Soviet-era elite, including those of former leader Jabbor Rasulov (1961-1982).

Turkmenistan is a different story altogether. The personality cults of its presidents after independence have left no room for any Soviet era leaders.

The Central Asian Soviet leaders have not left, even if the Soviet Union ceased to exist three decades ago. Despite many falling in disgrace during Soviet times, some of them have been rehabilitated to play a role in the modern Central Asian republics, with Kazakhstan and Uzbekistan leading the way with Kunayev and Rashidov. Thirty years after their independence, these countries are still in the process of crafting their historical narratives, and reaching out to their Soviet past to build their statehood is one of the many ways to do it.