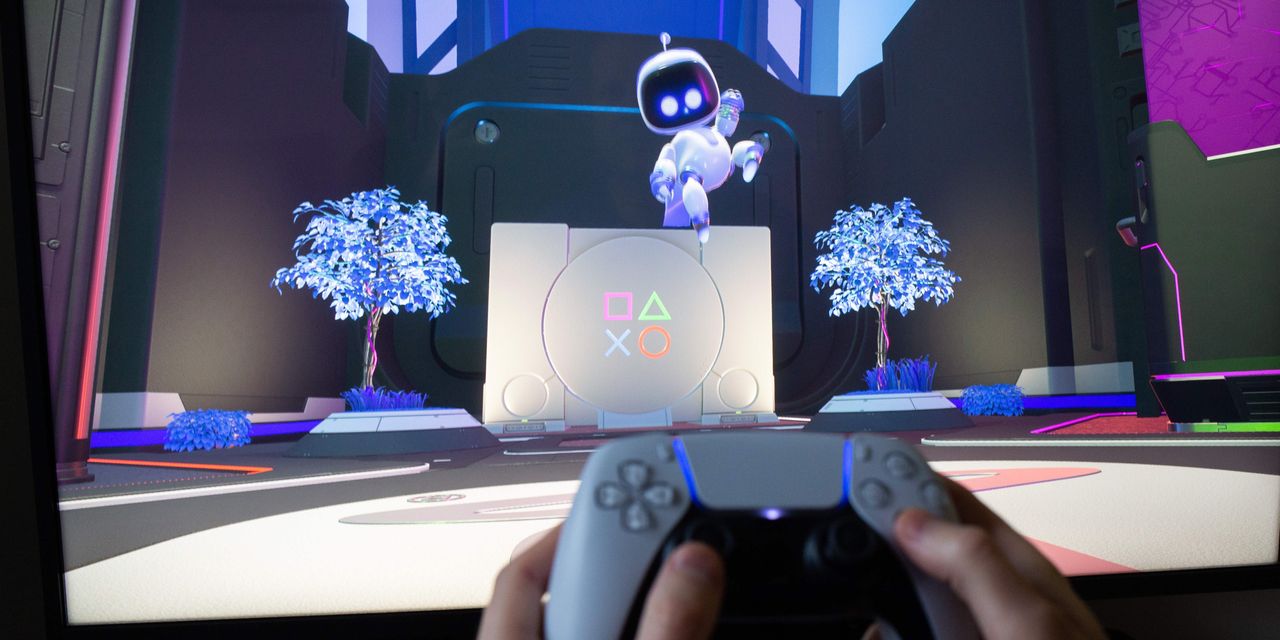 finds itself in a position many gamers could appreciate, having climbed to the highest level only to discover that an old foe is still lurking around—and getting stronger.

would give it control over some of the world’s most popular games. Sony faces decisions on how to beef up its own software lineup, whether to continue stressing hardware and what to do about the metaverse, which is made of three-dimensional virtual worlds that draw inspiration from realistic videogames.

Microsoft sees Activision game franchises like Call of Duty and World of Warcraft as the future core of its service known as Game Pass, which offers an all-you-can-play menu of games for $10 a month. Game Pass challenges Sony’s PlayStation Plus service, and Microsoft’s emphasis on software heightens the contrast with Sony, which still prides itself on packing the latest hyper-realistic graphics power into a proprietary box like the PlayStation 5.

Sony’s stock price has risen eightfold in the past eight years, making it one of the most successful periods in the company’s 76-year history. The Microsoft news sparked a rare selloff as Sony shares fell nearly 13% on Wednesday before recovering 5.8% the next day. Staying at the top requires adapting to a tech ecosystem in which more companies are building a direct relationship with consumers through subscriptions such as Netflix, Apple Music and Amazon Prime.

Its video content business, Sony Pictures Entertainment, has taken an arms-dealer approach of selling to all sides, including selling streaming rights to the decades-old sitcom “Seinfeld” to

platform. Sony Music artists like Adele are most easily heard on non-Sony platforms such as Spotify.

In videogames, Sony is closer to the Netflix model, thanks to PlayStation Plus, which is sold directly to gamers. Investors have cited that business as a big reason the stock is doing well.

As recently as a decade ago, videogames made up an eighth of revenue at a company that still relied on television sets and portable music players. Today, games and network services are Sony’s largest segment, accounting for close to a third of revenue and operating profit.

spoke at the CES technology show in January about building more “social entertainment spaces” that blend Sony’s strengths—such as virtual viewing of a soccer game or electric vehicles where passengers could play full-scale videogames. A spokesman declined to comment on Sony’s strategy in the wake of the Microsoft deal.

Sony’s PlayStation 5 went on sale in November 2020 around the same time as Microsoft’s latest Xbox, which has been a rival for two decades. As of last September, Sony had sold 13.4 million units of the PlayStation 5, and that number could have been higher if semiconductor shortages hadn’t been an issue.

But when it comes to profit, content is king—especially if it is exclusive—and that is where the Sony-Microsoft clash looks likely to heat up. Multiple titles in Activision’s Call of Duty franchise, which has sold 400 million games since 2003, rank among the top 10 bestsellers for PlayStation. That popularity has sparked concern from gamers and investors that Microsoft could withdraw access to the Activision games if its deal goes through.

On Thursday, Sony said it expected Microsoft to ensure that Activision games would be available on non-Microsoft platforms. Hours later, Microsoft’s videogame head,

tweeted that he had expressed to Sony leaders “our desire to keep Call of Duty on PlayStation.”

“I can see a scenario where titles like Call of Duty are released cross-platform but are only made available to Microsoft’s cloud and subscription services,” said Michael Inouye of ABI Research.

Microsoft said it has 25 million subscribers to Game Pass, up from 18 million a year earlier, while Sony’s PlayStation Plus had more than 47 million as of last September.

Analysts have speculated that Sony, which has made smaller acquisitions and investments in software companies in recent years, might go after a big game publisher to counteract Microsoft’s move.

One weapon for Microsoft is its Azure cloud-computing service. When multiple players cross virtual swords online, powerful computers process the data behind the scenes. Azure means Microsoft can tailor-make the cloud to suit its own videogames.

Sony has expressed interest in using Azure, and the two companies announced talks in May 2019, but they haven’t reported any progress. Sony said the talks continued, and Microsoft declined to comment. Sony game employees have said they rely on

In China, Sony and Microsoft trail

, which is both a cloud operator and the world’s largest gaming company by revenue. Tencent runs the cloud computing behind games like its own hit “Honor of Kings,” which people generally play on smartphones rather than dedicated game devices.

For Sony, the cloud isn’t as central yet. Around 60% of subscribers to Sony’s game service still download game software onto their consoles rather than streaming it via the cloud, said market researcher

At the same time, Sony leads Microsoft and others in a piece of hardware that may be critical to next-generation videogames—virtual-reality headsets. The headsets are also central to the metaverse concept promoted by

Facebook, an area where Sony’s technology could give it an edge although it hasn’t outlined a strategy yet.

Sony has sold six million units of its PlayStation VR headset since introducing it in 2016, according to analysts, and it plans an updated version soon. Microsoft has opted to sell devices from other companies like

“We are going to lead the way with exploring new technology that unlocks new entertainment experiences. Virtual reality is central to that philosophy,” said PlayStation business chief

in Las Vegas this month.

Write to Yang Jie at jie.yang@wsj.com