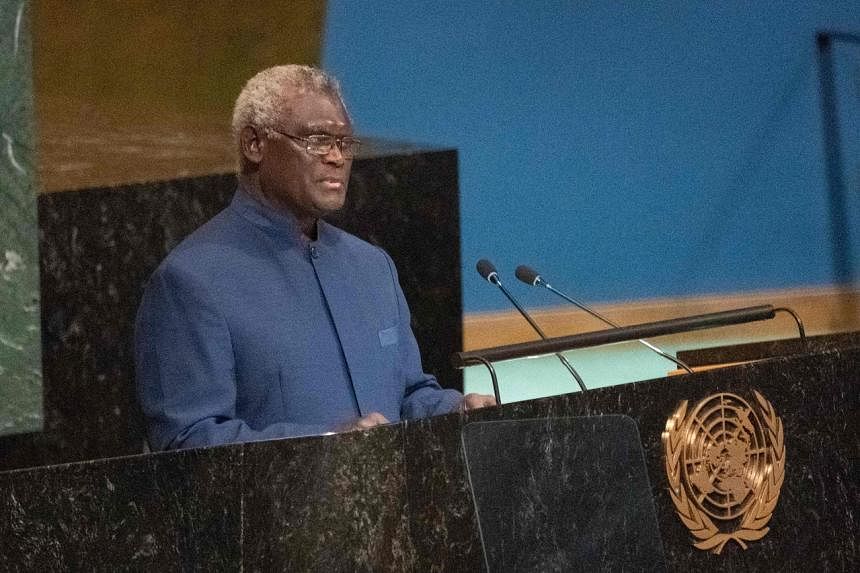 NEW YORK – Solomon Islands leader Manasseh Sogavare on Friday told the United Nations his South Pacific country remains neutral despite growing ties with China, charging that he has been “vilified” for the relationship with Beijing.

The sprawling archipelago switched diplomatic recognition from Taipei to Beijing in 2019 and signed a security pact with Beijing in April, with some critics warning of authoritarian tendencies by Mr Sogavare.

“We will not align ourselves with any external powers or security architecture that targets our or any other sovereign country or threatens regional or international peace,” the prime minister told the UN General Assembly. “Solomon Islands will not be coerced into choosing sides.”

He said his country of fewer than one million citizens has been unfairly targeted and subjected to “a barrage of unwarranted and misplaced criticisms” as major powers vie for Pacific influence.

“Solomon Islands has been vilified in the media since formalising its relationship with China,” he said.

Mr Sogavare has deepened his nation’s ties with China and earlier this month he was successful in efforts to change the Constitution to delay scheduled elections until 2024 at the earliest.

The four-time leader has twice been ousted by votes of no confidence and faced street protests against his decision to switch diplomatic recognition.

After widespread rioting in the capital Honiara and demands for his ouster last year, his government signed a secretive defence pact with Beijing that – according to a leaked draft – allows him to call in Chinese security forces to quell unrest.

Mr Sogavare at the UN called on all countries to “not inflame tensions” in or near the Taiwan Strait, amid mounting concerns over Taiwan.

“Any miscalculation could threaten international peace and security and could have disastrous consequences on global trade,” he said. AFP