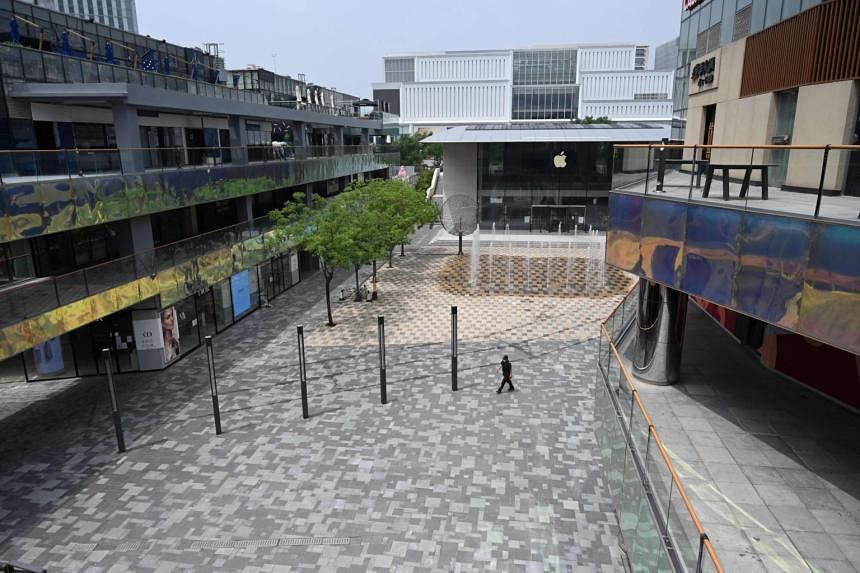 Activity at distribution centres used by Chinese e-commerce companies was even lower than during 2020, according to data up to Aug 17 tracking the movement of trucks around such areas. The data was shared with Bloomberg News by SpaceKnow, a New York-based company that analyses satellite imagery.

The data suggest weak earnings by companies such as Chinese e-commerce giant Alibaba Group, which posted its first ever drop in quarterly revenue for the three months ended in June, could continue as households cut back on spending.

That weakness also extended to brick-and-mortar retailers, with the change in the number of cars in shopping mall parking lots in August well below the same month in 2021.

Retail sales fell in March through May as the lockdowns in Shanghai and dozens of other cities confined tens of millions to their homes to control the spread of coronavirus.

Official retail sales data grew 2.7 per cent in July, though that was unadjusted for consumer price inflation, which was also 2.7 per cent for the month. Data for August will be released on Sept 16.

The lockdowns and the broader economic slowdown severely damaged Chinese households’ outlook on the future and undermined their willingness to spend.

Confidence in future income growth fell to the lowest level since at least 2009 in the second quarter of this year, according to a central bank survey, while households have been piling up savings at a record pace.

China’s official consumer confidence index dropped to its lowest level in nearly 10 years in April and has barely recovered since.

The satellite data adds to mounting evidence of a weak economy in August.

China’s manufacturing sector contracted in the month, according to the official purchasing manager’s index. Data from logistics company G7 Connect showed a 20 per cent decline in intercity truck flows in August, which researchers have found to be correlated with gross domestic product.

“The decline in activity at distribution centres happened before the decline in consumer confidence,” SpaceKnow said in a research note.

“Distribution centres were performing much better during the 2020 Covid period,” it said, adding that shopping mall activity hasn’t fallen to the lows seen during China’s initial coronavirus lockdowns in 2020.

With economists predicting consumption to remain weak this year, Beijing is trying to use government spending on infrastructure to revive growth.

But the high-frequency data suggests that the infrastructure push so far hasn’t been able to offset the hit to construction activity from a deep slump in China’s property market.

Going forward, the company said it’s key to monitor if consumption and construction recovers or if “the weakness begins to extend into manufacturing industries.”