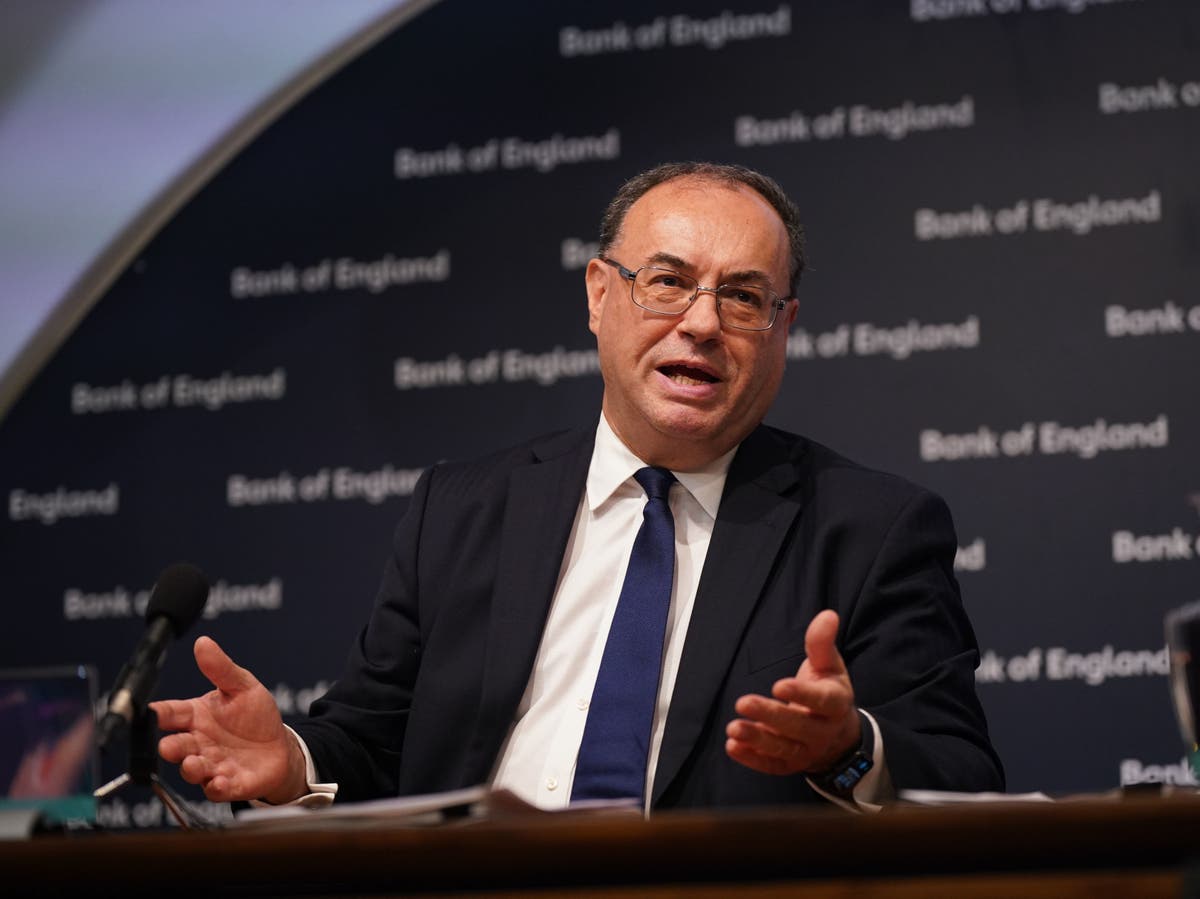 Bank of England raises interest rates to 1.75% as recession predicted later this year

The Bank of England governor has been criticised for saying pay rises will fuel inflation.

The Bank yesterday increased interest rates to 1.75 per cent – the highest in 27 years – while warning that Britain will plunge into a year-long recession this autumn.

Governor Andrew Bailey urged workers to limit their demands for a pay rise this year warning of the impact of high inflation on those who don’t have “bargaining power”.

“If everybody tries to beat inflation, it doesn’t come down, it gets worse, that’s the problem,” Mr Bailey said.

However, his suggestion was met with strong criticism as unions urged it was “not for hard-pressed workers to cut back even further.”

Kate Bell, head of economics at TUC: “Without wage increases, working people will simply stop spending on anything non-essential – and that will hurt our high streets, damage business and make a recession very likely, putting jobs at risk up and down the country.”

The governor of the Bank of England Andrew Bailey has said rocketing inflation “concerns me most” amid political criticism over the speed of actions taken by the bank to tackle the current economic turmoil.

“We are in the centre of things because of what is going on in the world at large and the impact that is having on inflation, and that’s what concerns me most at the moment,” he told BBC Radio 4’s Today programme.

“Central bank independence is critically important in our view, but our job is to get inflation back down to target.

“I think it’s important that there is a full debate during this process to choose the next prime minister of this country.

“It is clearly very important that public officials like I do not intervene in this debate and I am not doing that.

“We have strong views, of course, but I look forward to working with the new Government and new prime minister, and sure we will have substantive exchanges on this.”

Speaking to Sky News this morning, business secretary Kwasi Kwarteng also said there is a “strong argument” that interest rates should have been raised “slightly sooner”.

Asked how the Bank of England has handled the current situation, Mr Kwarteng said: “There is an argument – and I think it’s a strong one – to say that inflation was an issue that was identified at the beginning of last year.”

He said: “The job of the Bank was to deal with the inflation. They have got a 2 per cent inflation target. That’s actually their mandate. And now inflation is hitting double digits. So, clearly something has gone wrong and I think there is an argument to suggest that rates should have probably gone up slightly sooner.”

Business Secretary Kwasi Kwarteng, who is backing Liz Truss in the Conservative leadership content, argued that taking more of people’s money through tax when their real income is being squeezed by inflation “doesn’t make any sense”.

Speaking to BBC Radio 4’s Today programme, he said: “There is pressure on public finances but the immediate problem, as Liz always said, is one of growth.

“She talked about recession very early on, a few weeks ago, at the beginning of the leadership contest, and the risk of recession means that you can’t have rising interest rates, which we saw yesterday, and also have tighter fiscal policy. No economist in the world is going to say that the way to deal with a looming recession is to tighten monetary policy and to tighten fiscal policy at the same time.”

“But you don’t put up interest rates as well as tightening fiscal policy. Nobody is doing that. That’s why, across the the world, people are actually saying we need to help people.”

Commenting on the Governor of the Bank of England’s suggestion that workers’ pay should not keep up with the cost of living and that workers with bargaining power in particular should show restraint, TUC Head of Economics Kate Bell said:

“It’s time for companies to rein in their profits – not for hard pressed workers to cut back even further.

“After the longest and harshest wage squeeze in 200 years, working people in every part of the country are suffering a huge fall in living standards as prices soar.

“With incomes set to fall even further and the economy teetering on the brink of recession, it’s now more than ever that workers need a pay rise.

“Without wage increases, working people will simply stop spending on anything non-essential – and that will hurt our high streets, damage business and make a recession very likely, putting jobs at risk up and down the country.

“Making sure people can put food on the table for their family is not going to push up inflation.

“’If the Governor is worried that some workers might miss out on negotiated pay rises, he should encourage all workers to join a union.”

Governor Andrew Bailey has also today denied criticism that the Bank was too slow to act over soaring inflation.

It came after claims from politicians, including Attorney General Suella Braverman, that the Bank was asleep at the wheel and allowed inflation to get out of control.

Mr Bailey told BBC Radio 4’s Today programme said he does not believe the Bank acted too slowly and that earlier action could have brought forward a recession.

“We don’t make policy with the benefit of hindsight,” he added.

“I’d challenge anyone sitting here a year, two years ago, to say there will be war on Ukraine and it will have this effect on inflation.”

With the Bank of England’s interest rate increases came governor Andrew Bailey’s suggestion that workers should limit their demands for a pay rise this year warning of the impact of high inflation on those who don’t have ‘bargaining power’.

Andrew Bailey said the problem was one “we all have to be very conscious of” hours after he warned households will suffer the deepest fall in living standards on record as the UK plunges into a yearlong recession this autumn.

Calling for wage restraint, Mr Bailey said: “If everybody tries to beat inflation, it doesn’t come down, it gets worse, that’s the problem.”

He added: “There’s a second problem. I put this in terms of high pay rises and high price increases, because in that world it’s the people who are least well off who are worst affected, because they don’t have the bargaining power. I think that is something that broadly we all have to be very conscious of.”

Yesterday the Bank of England announced that interest rates would be increased to 1.75 per cent, in addition to an ominous warning that Britain will plunge into a year-long recession this autumn in which households will be hit by the deepest fall in living standards on record.

In one of its bleakest ever assessments of UK economic prospects, the Bank’s Monetary Policy Committee (MPC) said inflation will now peak at 13.3 per cent in the final three months of this year as average energy bills treble from £1,200 in 2021 to £3,500 by October.

The economy is now forecast to shrink in five consecutive quarters for the first time since the global financial crash of 2008.

More below from our business correspondent, Ben Chapman:

Good morning and welcome to The Independent’s live blog coverage following yesterday’s interest rate announcement. We’ll be bringing the latest updates as the nation reacts to the Bank’s recession warning.