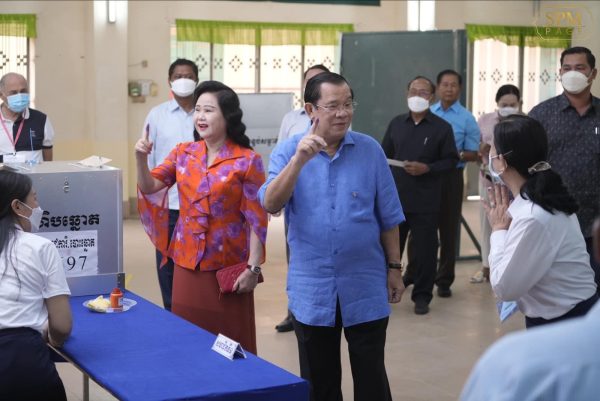 Provisional results from this weekend’s local elections in Cambodia are in, and as expected, the Cambodian People’s Party (CPP) has engineered – “won” is not quite the right word – a convincing victory.

While the official final returns are not expected to be released until June 26, the National Election Committee (NEC) said in a statement yesterday that, Prime Minister Hun Sen’s party had won 9,338 out of the 11,622 contested commune council seats, the Associated Press reported. The Candlelight Party, the latest incarnation of the opposition party founded by Sam Rainsy in 1995, won 2,119 council seats, with the remaining 165 going to a smattering of small parties, most of them aligned with the CPP.

The results are no surprise, given the extent of the CPP’s control over nearly every level of government and the coercive machinery of the state. Since the last commune election in 2017, the CPP has waged a fierce crackdown on the political opposition and the country’s independent press and civil society groups. This involved the court-ordered banning of the Cambodia National Rescue Party (CNRP), which scored 43 percent of the popular vote at those elections, and the arrest of its president Kem Sokha for treason.

The court ruling forced CNRP members to relinquish their elected posts, and many subsequently fled into exile. This paved the way for the CPP to accomplish a Saddam Hussein-like sweep of the 2018 national elections, in which it won every seat in the National Assembly.

While the CPP allowed the Candlelight Party to reform and participate in Sunday’s election, local intimidation and the specter of another crackdown have imposed a severe limit on how much it could win. The opposition was also divided, following last year’s split between the political camps led by Sam Rainsy and Kem Sokha, whose partnership had lain the basis for the CNRP’s success at elections in 2013 and 2017.

In a pre-election analysis of the country’s political landscape and legal framework, Asian Network for Free Elections (ANFREL) said the election was likely to fall far short of being “fair, credible, transparent, inclusive, and peaceful.” Sure enough, Candlelight Party has made a number of complaints about intimidation and breaches of electoral rules by CPP village chiefs.

While the CPP’s victory was never in serious doubt, the conduct of the elections for Cambodia’s 1,652 communes and sangkats, the administrative levels above the village, normally foreshadow the result of the national parliamentary elections, which are next due in 2023. Based on this year’s result, we can assume that the CPP will permit a limited loosening of the political controls in the run-up to next year’s poll, when it can remain confident of engineering an amenable result.

One local observer of Cambodian politics noted that the CPP had made an internal projection based on the popular votes from the Sunday election, estimating that the CPP could secure 104 National Assembly seats to 21 for the Candlelight Party. This would represent the most convincing CPP victory aside from the no-contest 2018 election – just the right measure of “democracy” from the perspective of a party that has always treated the concept with suspicion.

However, as I’ve argued previously, the most interesting thing to watch is how this electoral cycle will bear on international perceptions of Hun Sen’s government. The crackdown of 2017 and the no-contest 2018 election effectively abrogated the 1991 peace settlement that created Cambodia’s democratic system, and led to a distinct hardening of Western attitudes toward the CPP government. This position has only hardened further as Hun Sen has moved closer to China, wielding its largess as a shield against Western democratizing efforts.

While the U.S. has recently made some gestures in the direction of a rapprochement, there is good reason to believe that Western perceptions of Hun Sen and the country at large are set and that effectively preordained electoral exercises will do little to shift the calculus.