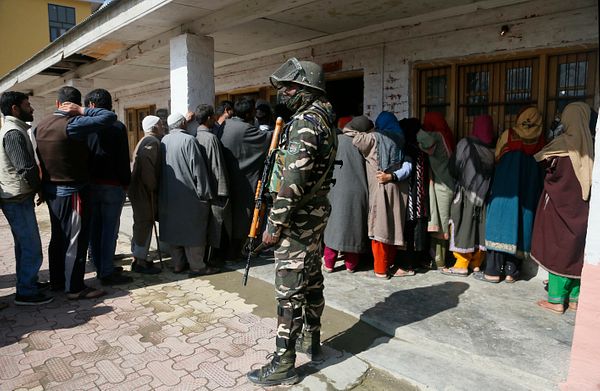 The Delimitation Commission’s redrawing of electoral boundaries in Jammu and Kashmir could benefit India’s Hindu nationalist BJP in this Muslim-dominated Union Territory.

An Indian paramilitary soldier stands guard as Kashmiri voters wait in a queue to cast their votes outside a polling station during the second phase of India’s general elections, on the outskirts of Srinagar, Indian controlled Kashmir, April 18, 2019.

The Delimitation Commission, which was tasked with redrawing boundaries of assembly and parliamentary constituencies in Jammu and Kashmir (J&K), has made public its proposals for the troubled Union Territory.

While the number of parliamentary constituencies in J&K will remain unchanged at five, the Delimitation Commission has proposed raising the number of assembly seats from the present 83 to 90. Six of these new assembly constituencies will be in the Jammu region and one in the Kashmir region. At present, Jammu has 37 members, whereas Kashmir has 46. The Commission has proposed increasing this to 43 and 47 respectively. Seven seats will be reserved for Scheduled Castes and nine for Scheduled Tribes.

Once India’s only Muslim-majority state, J&K was made a Union Territory in 2019, when India’s Hindu nationalist Bharatiya Janata Party (BJP) government revoked J&K’s autonomy, stripped it of its status as a state, and split it into two Union Territories: Ladakh and J&K.

According to the 2011 Census of India, Muslims make up 68.31 percent of the J&K population, with the majority of Muslims living in the overwhelmingly Muslim Kashmir region. Hindus make up 28.44 percent of Jammu’s population and are mainly concentrated in four districts.

Critics of the Delimitation Commission’s proposals accuse it of gerrymandering, redrawing electoral boundaries to create new constituencies that are Hindu-dominated.

The Delimitation Commission’s proposals have been strongly opposed in the Kashmir Valley. The People’s Democratic Party boycotted the delimitation process. Its chairperson and former chief minister, Mehbooba Mufti, has accused the Commission of “serving the interests of the BJP.”

Hasnain Masoodi, a senior leader of the National Conference and an associate member in the Delimitation Commission, has said that the “population criteria which is an important component to be followed in a delimitation exercise” has been “pushed to the backseat.” The commission has not followed a uniform yardstick while delimiting constituencies, he pointed out.

“Parameters such as population for an assembly seat or mountainous terrain geography have been ignored,” G. A. Mir, president of the Jammu and Kashmir Congress Committee, said. “This draft report is a form of devastation for Jammu and Kashmir,” he added.

New assembly segments drawn by the panel in Kashmir will have an average population of 140,000 million people against only 120,000 in the Jammu region. The new Anantnag parliamentary constituency also defied the logic of geography in delimiting electoral boundaries. Its assembly segments straddle the Panjal mountains which separate Kashmir from the Pir Panjal and Chenab regions of Jammu.

The delimitation panel shared the first and second drafts of its proposals with its five associate members in December and February respectively.  Following complaints from NC parliamentarians and comments from the BJP, the latest draft that has been made public includes only minor changes.

The commission has given the general public only a week to provide feedback on the latest draft, following which it will engage in public discussions in Srinagar and Jammu on March 28 and 29.

Assembly elections that are held on the basis of the Delimitation Commission’s proposals could result in India’s only Muslim-majority territory electing a Hindu chief minister. That would be a major victory for the BJP in the run-up to the 2024 parliamentary elections.