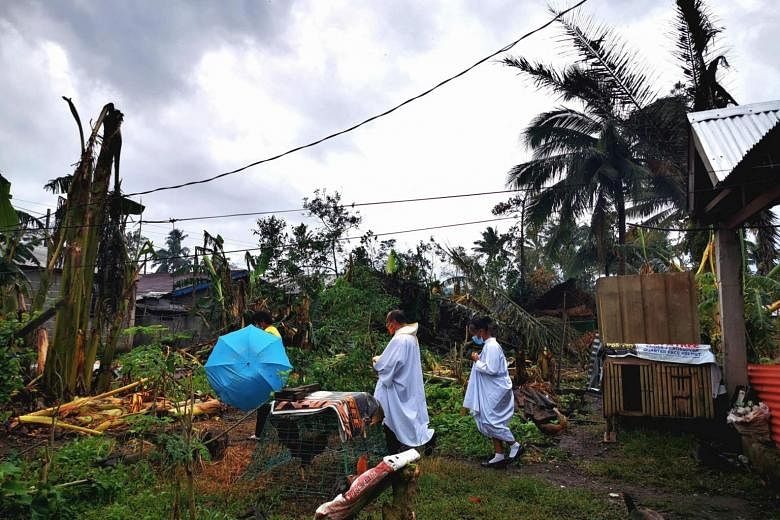 ALEGRIA, PHILIPPINES (AFP) – Father Ricardo Virtudazo stands in a pool of water in his typhoon-hit church in the southern Philippines delivering Christmas Day mass to dozens of devotees whose wishes this year were for new roofs, food and fine weather.

More than a week after Typhoon Rai cut a swathe through the archipelago, killing nearly 400 people and leaving hundreds of thousands homeless, survivors clung to family and faith after their homes – and planned festivities – were wiped out.

“What’s important is all of us are safe,” said Ms Joy Parera, 31, attending Christmas mass with her husband at San Isidro Labrador Parish church in the town of Alegria, on the northern tip of Mindanao island.

A light rain soaked the pews and white tiled floor of the damaged church, which has been left with a gaping hole in the roof after Rai ravaged the area.

Devotees wore masks as they gathered inside the church festooned with Christmas decorations and prayed for a better year.

“In spite of the calamities they experience, they still have faith in God.”

Christmas is one of the most important events in the Christian calendar and in the Catholic-majority Philippines, families typically gather to share a meal.

But the widespread destruction caused by Rai in the southern and central regions of the country has dampened celebrations as many survivors plead for drinking water and food.

Mindanao, Siargao, Dinagat and Bohol islands are among the most devastated by the storm, which knocked out electricity, tore off roofs, shredded wooden buildings, felled concrete power poles and uprooted trees.

The scale of the damage, lack of mobile phone signal or internet in many areas, and depleted government coffers after the Covid-19 response were hampering efforts to distribute aid.