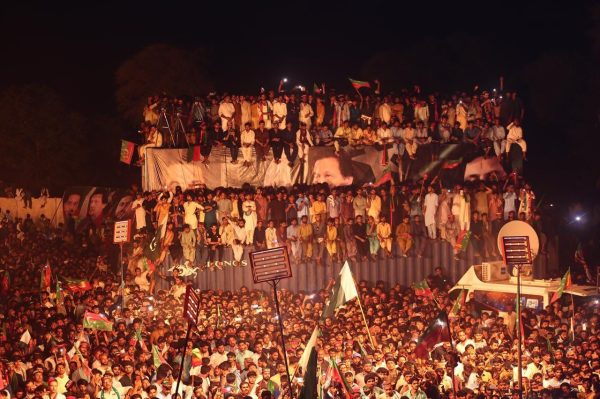 Political instability has deepened in Pakistan after the Imran Khan-led Pakistan Tehreek-e-Insaf (PTI) won a sweeping victory in the recent Punjab provincial assembly by-polls on Sunday. This is a major setback for Prime Minister Shehbaz Sharif, whose son Hamza Shehbaz became chief minister of the province two months ago after defeating the PTI candidate for the post.

Already, PTI has announced that it will form the government in Punjab on July 22. This is just weeks after PTI lawmakers in the province abandoned the PTI government to join the Pakistan Muslim League-Nawaz (PML-N)-led coalition government.

PTI’s unexpected win has complicated the woes of the ruling PML-N-Pakistan People’s Party (PPP) coalition, which is finding it hard to counter the political challenge posed by Khan. For months, Khan has been attacking the coalition government and the military leadership for allegedly partnering with the U.S. to remove him from power via a controversial no-confidence motion in parliament in March.

Khan’s allegations are not devoid of truth. A day after the PML-N lost the Punjab by-elections, a senior PML-N leader claimed that his party leadership was “threatened” that if the no-confidence motion was not brought against Khan, then “someone will take over the certain post.”

The PML-N lawmaker was referring to former Director-General of the Inter-Services Intelligence, Lt. Gen. Faiz Hameed, who was expected to be appointed as the next army chief in November 2022 by Khan’s government.

It is possible that the PML-N and PPP, then in opposition, were worried about Faiz’s appointment as the next army chief and therefore decided to oust Khan’s government through a vote of no-confidence without paying heed to the potential fallout.

That decision to hold a no-confidence vote has backfired hugely for the Sharif-led coalition government and the current leadership of the military establishment. Not only has Khan won back Punjab against all odds, but also he has been able to sell his anti-establishment narrative in the province to an extent that the institution seems unable to do anything to counter him.

Khan’s barrage of attacks against the military was so swift that it couldn’t intervene to help the PML-N in the Punjab by-polls over fears of a public backlash. “The coalition government was hopeful of the military’s support in the Punjab by-elections but that didn’t come,” a PML-N lawmaker told The Diplomat on condition of anonymity. He further revealed that the party was bitterly divided over the issue of allowing PTI turncoats into the party and offering them tickets to contest the by-elections. Others believe that PML-N’s decision to give up the post-2018 narrative of resisting the establishment to oust Khan cost the party dearly.

At this stage, it remains unclear whether the military made the decision to not intervene in the by-polls or was simply too shell-shocked by Khan’s attacks to pull it off. The deep support that Khan enjoys among the military’s rank-and-file could have also deterred the military leadership from intervening in the PML-N’s favor.

In any case, Imran Khan has emerged as the ultimate winner and appears to be on his way to becoming Pakistan’s prime minister again. In his speech after winning the by-elections, Khan laid out his plan of action. In addition to demanding the resignation of the Chief Election Commissioner, who he described as biased, he pressed on with his anti-establishment narrative, accusing his opponents of coming to power thanks to an alleged foreign conspiracy to oust his government. He has called for early elections to end the political instability in the country.

After Monday’s win, the momentum is with the PTI. Khan can now expect to come back to power without the support of the military establishment to appoint the next army chief – an issue that started the whole vote of no-confidence saga.

However, it is not going to be that simple for Khan. He may have won the Punjab by-elections, but that doesn’t mean he will win the next general elections as well. It is also possible that his opponents in the civil and military leadership will not concede his demand for immediate general elections. He appears to be waging a war on the system to have his way, but the system is not that easy to surmount.

The ruling coalition has announced that it will complete its term in office as per the constitution. The former prime minister and senior PML-N leader Shahid Khaqan Abbasi ruled out early elections saying that the current coalition will “remain in power till Aug. 17, 2023.”

Meanwhile, the PML-N has realized that its defensive approach to dealing with Khan has proved costly and wants to change its strategy.

“I urge the Election Commission of Pakistan to announce long-delayed judgment on PTI foreign funding case. For long has Imran Niazi been given a free pass despite his repeated & shameless attacks on state institutions. Impunity given to him has hurt the country,” Prime Minister Shehbaz Sharif tweeted on Tuesday morning. The PML-N is likely to go on the offensive against Khan.

However, the larger question is whether the current ruling coalition can govern at the center with Khan undermining their rule from Punjab and Khyber Pakhtunkhwa (KP). The way things are unfolding, it would hardly be a surprise if Khan refused to implement the federal government’s decisions in Punjab and KP.

Can the country’s dying economy withstand the growing political instability with Khan smelling blood? On Tuesday morning, Pakistan’s currency fell to an all-time low against the U.S. dollar, reaching an exchange rate of 221 rupees in the interbank market.

It is important to note here that Pakistan is yet to sign a deal with the International Monetary Fund. The country’s foreign reserves are barely enough for a few weeks of imports and no country is ready to help Pakistan immediately to avert a crisis.

Clearly, economic sentiment in the country is going downhill since Khan’s ouster from power, and with the new government unable to bring political stability. The latest political developments indicate that things are going to get ugly in Pakistan in the coming days. The coalition government will likely cling to power in an effort to put Khan under pressure, while the latter should be expected to raise costs to a level that elections appear the only solution to all stakeholders.

In the midst of this all, Pakistan may very well go bankrupt. Pakistan’s politics has entered the ugliest and one of the most discredited phases in recent history. It will have far-reaching implications.