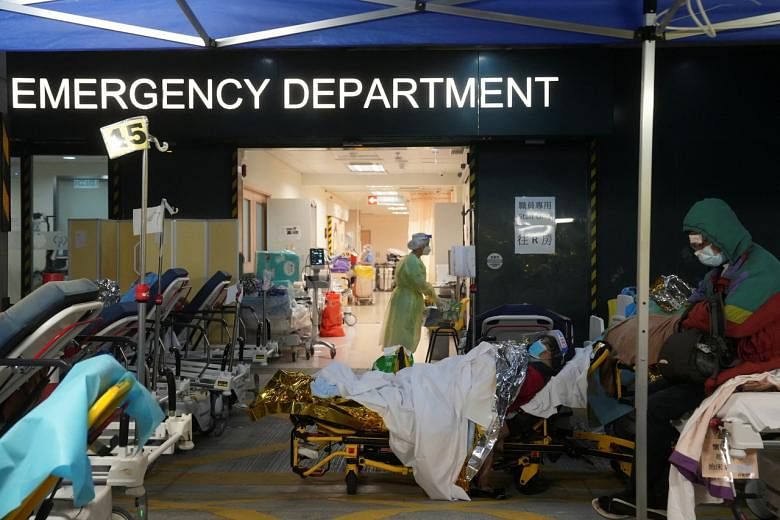 HONG KONG (BLOOMBERG) – Ting Chan has seen Hong Kong’s pandemic situation lurch from over-the-top caution to outright chaos. A nurse at one of the city’s public hospitals, she’s been a ground-level participant in the strict “zero-Covid-19” strategy that has kept the financial hub largely free of the virus for the past two years.

Key to that has been Hong Kong’s mandatory hospitalisation of all Covid-19 cases, regardless of whether they’re mildly ill or even asymptomatic.

While that’s helped keep the total death toll at a little over 200 for the entire pandemic, those elaborate defences have collapsed in the face of the highly-transmissible Omicron variant.

The city’s current outbreak, with 6,116 cases logged on Thursday (Feb 17), is the worst Hong Kong has seen. But even with just 17 Covid-19 patients classed as critical on Wednesday, hospitals are already overwhelmed and the health infrastructure is crumbling.

More than two years since the first Wuhan cases, Hong Kong is seeing the sorts of scenes that marred the early days of the pandemic, when the world knew little about the virus.

Elderly patients are lying on gurneys in the street because hospitals have no more space inside and frightened residents are flooding emergency rooms. More than 100 Covid-19-positive people came to Chan’s hospital on a night shift this week, and there were only two nurses to tend to them.

While the vast majority are only mildly ill for now, the pandemic’s history has shown that strain on hospitals has invariably led to a deterioration in medical care and preventable fatalities.

“We never expected things to end up like this,” Chan said.

Neither, it seems, did Hong Kong’s most senior officials. The shuttered borders and weeks-long traveller quarantines that are the hallmark of China’s “zero-Covid-19” approach bought Hong Kong time to prepare, to watch and learn as other world capitals struggled with imploding outbreaks. Yet the government seemed to have no Plan B as Omicron cases quickly scaled its hard-core virus controls.

Government advisers and health experts who spoke to Bloomberg News say officials failed to prepare for the virus’s inevitable infiltration by increasing quarantine facilities, isolation wards and hospital capacity during the period of calm over the last year. Though examples of how Omicron surges exponentially have been unfolding across the world since last November, Hong Kong seemed to have paid little attention.

Now, faced with no choice but to double down on the zero-tolerance strategy pushed by Beijing, they’re being forced to change policies on the fly and take ad-hoc measures in the middle of a raging outbreak. A government representative declined to comment beyond officials’ earlier remarks that Hong Kong’s “zero-Covid-19” strategy remains the most effective, and that the government is seeking more isolation spaces.

“Omicron changed everything,” Bernard Chan, a financier and convener of Hong Kong leader Carrie Lam’s advisory Executive Council, said in an interview. “The issue is just that it came so fast. The plans were in place, but it just overwhelmed us so quickly.”

Hospitals, which have been told to prioritise children and the elderly, have resorted to setting up rows of tents outdoors to shelter patients while they wait for a bed. Ambulance services are also strained, because some carrying potentially infected people are getting held up at hospitals for hours until there’s space available, according to an emergency room nurse working at a public hospital who asked not to be identified because he’s not authorised to speak about the issue.

The rapidly growing outbreak is only the latest blow to a city once known as a stable place to do business with China. Over the last three years, Hong Kong has struggled with violent anti-government protests, new national security legislation that’s raised questions about the rule of law, and the onerous travel restrictions that have frustrated businesses and contributed to a record exodus of residents.