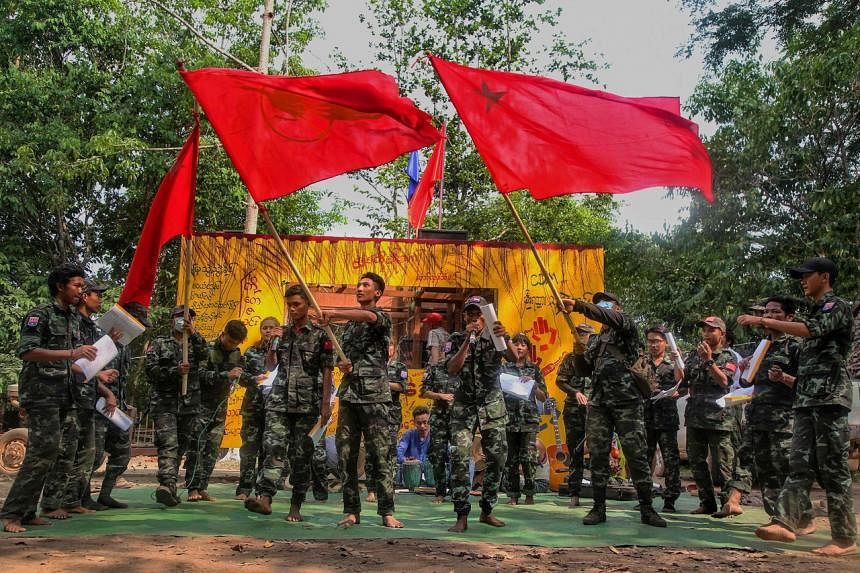 KAYIN STATE, MYANMAR (AFP) – A troupe of Myanmar folk singers and satirists are taking their new show on a jungle tour, hoping to rally anti-coup fighters far from their families with barbs against the junta and jokes about home.

Myanmar has been in chaos since last year’s coup sparked renewed fighting with ethnic rebels and sprouted dozens of “People’s Defence Forces” that have battled the junta across the country.

In eastern Kayin state, the “Peacock Generation” activist troupe are trying to boost morale with traditional “Thangyat” performances of poetry, comedy and satirical songs against the junta.

Near the Thai border, their makeshift tour bus – with a three-finger salute popular with pro-democracy protesters in Hong Kong and Thailand painted on one side – bumps along a dusty track en route to a camp.

Upon arrival, the unfazed troupe of around 15 mostly young performers rehearse their lines.

“We are expecting the battle like we hope for rains,” they sing, stepping in unison across a makeshift stage, accompanied by drums and cymbals. “Let’s start the bullets raining.”

“Thangyat” is traditionally performed around the new year, and has been used for centuries in Myanmar to poke fun at politics and society and vent against injustices small and large.

But the military has waged a brutal crackdown on dissent since the February 2021 coup.

More than 1,700 civilians have been killed and over 13,000 people arrested, including dozens of journalists, according to a local monitoring group.

A handful of media outlets have also been forced to shut down.

At the camp, a handful of young fighters in camouflage uniforms sit cross-legged, some clapping along.

“We also want to live like you – peacefully with cigarettes and coffee,” the troupe sings to a row of smartphones in the audience – a message that will reach those sitting at home when the performance is broadcast online later.

“We are still young and we are missing our mothers who always scold us.”

The few dozen at the camp are some of the hundreds, according to analyst estimates, who have trekked into border areas held by Myanmar’s established rebel groups to receive weapons training.