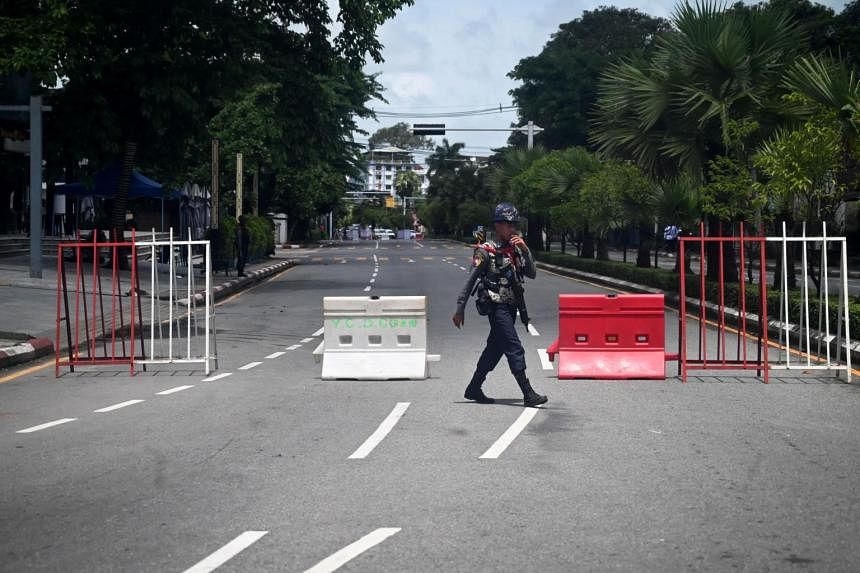 YANGON (AFP) – The 75th anniversary of the assassination of Myanmar’s independence hero and father of ousted leader Aung San Suu Kyi was a muted affair on Tuesday (July 19), with soldiers patrolling Yangon’s streets and anti-junta demonstrators staging small protests in other parts of the country.

Known affectionately as “Bogyoke” (General), Aung San led Myanmar’s battle for independence from Britain but was gunned down in July 1947, just months before his dream was finally realised.

His daughter Aung San Suu Kyi – who was two at the time of his death – became a democracy figurehead, Nobel laureate, and nemesis of the military.

Detained since the military’s latest power grab in February last year, she is now battling a raft of charges in a junta court and could be jailed for more than 150 years if found guilty on all counts.

But on Tuesday the roads were largely deserted, with soldiers on watch at the compound, some ordering passersby trying to take selfies near the buildings of red and yellow brick to move along.

Others patrolled in jeeps and extra roadblocks had been set up in the usually bustling district.

Across the country, demonstrators staged small protests against the junta, with local media reporting gatherings in southern Tanintharyi region, eastern Karen state and in the northern Sagaing region.

Meanwhile, state media footage showed junta No. 2 Soe Win placing a wreath at the Martyrs’ Mausoleum in Yangon – another spot usually bustling with those wishing to pay their respects, but on Tuesday limited to invitees only.

No officials from western countries – which have led international criticism of the junta’s bloody crackdown on dissent – were present at the event, according to a diplomatic source.

“They (the military) unlawfully arrested the daughter, but salute her father,” read one comment posted on social media. “Only shameless people would do this.”

The otherwise muted commemorations were broken briefly by the traditional mass honking of car horns across the commercial hub at 10.37am – the time Aung San was killed.

Born in 1915 under British colonial rule, Aung San became leader of nationalist fighters in what was then Burma – making him the founder of Myanmar’s military.

He remains a deeply revered figure and a core factor behind his daughter’s enduring popularity.

During her years of house arrest under the former junta, Ms Suu Kyi was barred from commemorating the anniversary of his death.