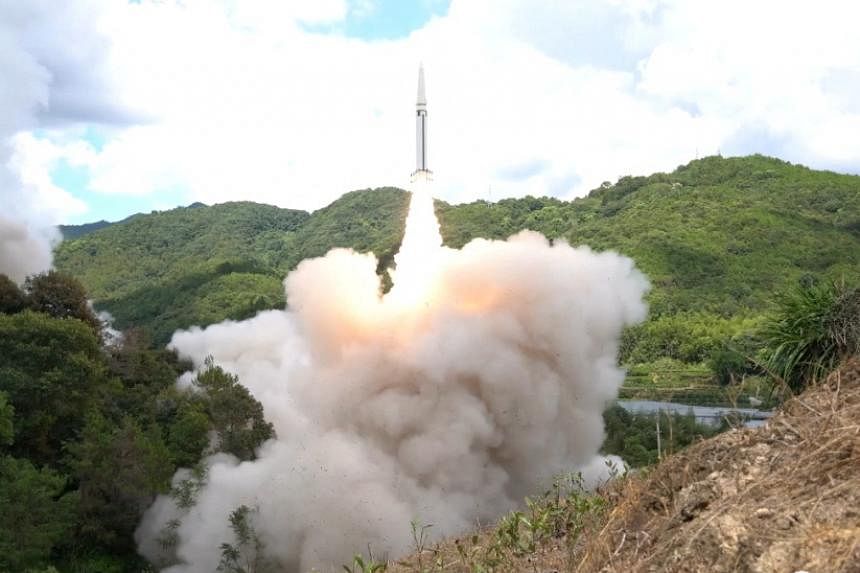 TOKYO – China on Thursday (Aug 4) fired at least 11 ballistic missiles around Taiwan in the course of unprecedented live-firing exercises following the visit of United States Speaker Nancy Pelosi to Taiwan.

The People’s Liberation Army (PLA) said its missiles “all precisely hit their targets”, even as Japan said five of them had landed in its exclusive economic zone (EEZ).

China has deployed scores of planes and fired live missiles in its biggest-ever drills in the Taiwan Strait, which began at noon yesterday and will run until noon on Sunday, making clear its fury over Mrs Pelosi’s visit to the self-ruled island.

As tensions rippled into the annual meetings of Asean foreign ministers and their dialogue partners in Phnom Penh, Chinese Foreign Minister Wang Yi and US Secretary of State Antony Blinken refused to meet each other.

A planned meeting between Mr Wang and his Japanese counterpart Yoshimasa Hayashi was also cancelled as Beijing slammed a Group of Seven statement that urged it to resolve tensions over Taiwan peacefully.

Mr Wang described Mrs Pelosi’s Taiwan trip as a “manic, irresponsible and extremely irrational action”, and called the US the “biggest destroyer of peace in the Taiwan Strait and the biggest troublemaker for regional stability”.

In his meeting with Asean ministers yesterday, Mr Blinken said that Washington had reached out to Beijing “at every level of government” to ease tensions.

“I hope very much that Beijing will not manufacture a crisis or seek a pretext to increase its aggressive military activity,” he said.

Beijing regards Taiwan, with 23 million people, as a breakaway province to be reunited, by force if necessary, while Mrs Pelosi had,

in a meeting with Taiwanese President Tsai Ing-wen, celebrated Taipei as a bulwark of democracy.

By Tokyo’s analysis, four missiles flew over Taiwan in what would be seen as an unprecedented escalation. The last time China fired missiles into waters around Taiwan was in 1996, and it had never before sent missiles over the island.