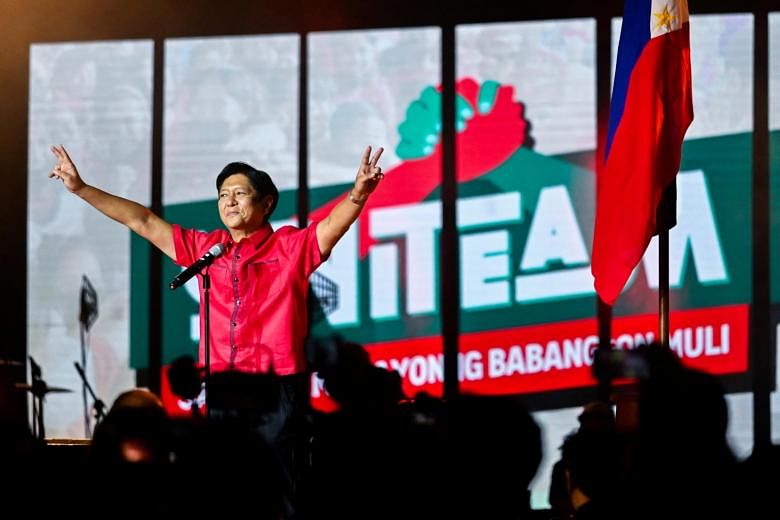 MANILA (BLOOMBERG) – Ferdinand Marcos Jr, son and namesake of the late Philippine dictator, will skip another gathering of presidential candidates as he widened his lead in a survey conducted by pollster Pulse Asia Research in January.

Marcos, a former senator, was chosen by 60 per cent of the 2,400 respondents, Pulse Asia said on Sunday (Feb 13), higher than the 53 per cent he garnered in December. Vice President Leni Robredo, the opposition leader, came second with 16 per cent. The survey was conducted between Jan 19 and Jan 24, with a margin of error of plus-or-minus 2 per cent.

Marcos, in a speech on Monday after the release of the survey results, repeated his message of national unity. Robredo’s camp meanwhile said on Sunday that the survey results didn’t capture recent media interviews, and added that the vice president “has the clear momentum”.

The survey was conducted before last week’s decision by a division of the Commission on Elections that junked three petitions to disqualify Marcos. The people behind the petitions said they would appeal. The poll was also done before controversies over Marcos’s absences in media interviews and forum.

Marcos will skip a Feb 27 presidential debate organised by CNN Philippines, the TV network said on Twitter on Monday, adding the rest of the nine contenders for the top post will attend. Early this month, Marcos also turned down an invitation to attend a media forum for candidates, citing a conflict in schedule.

The Pulse Asia survey also showed boxer and Senator Manny Pacquiao and Manila City mayor and former actor Isko Moreno tied for third with 8 per cent each, while Senator Panfilo Lacson was 5th with 4 per cent. The elections will be held on May 9.

Asked who they would choose if their top choices for president and vice president do not continue with their candidacies, Moreno and Sotto topped the list.