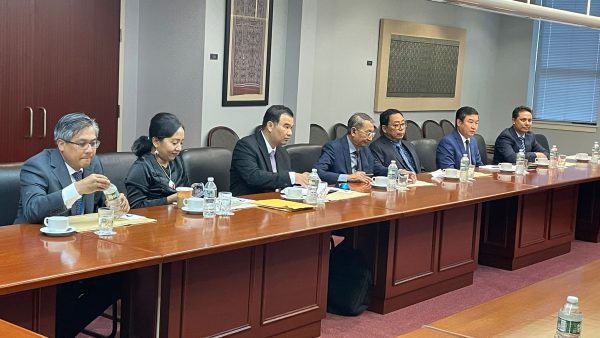 The Malaysian envoy says that the Southeast Asia bloc must ask whether its Five-Point Consensus is still “relevant.”

Malaysia’s foreign minister has once again urged the Association of Southeast Asian Nations (ASEAN) to act more decisively in response to the political and humanitarian crisis in Myanmar. Speaking to reporters on the sidelines of the annual gathering of world leaders for the U.N. General Assembly in New York yesterday, Saifuddin Abdullah said that that the 10-nation bloc must decide whether to stick with its failed Five-Point Consensus peace plan before its summit in two months’ time.

“Between now and the ASEAN summit in November ASEAN must seriously review if the Five-Point Consensus is still relevant, and if it should be replaced with something better,” Saifuddin said, according to a report by Reuters. “By the time we meet in November, we must ask that hard question and we must have the answer during that time.”

Saifuddin was speaking after a meeting with members of Myanmar’s opposition National Unity Government (NUG), which is spearheading the resistance to the military administration.

Myanmar has been in the grip of political turmoil and economic dysfunction since the military seized power in February 2021, terminating the country’s experiment in limited democratization. The most immediate effect of the coup was to inflame the country’s existing ethnic conflicts and set off new conflicts in areas of the country that had not seen fighting for decades.

ASEAN has struggled to respond to the crisis. At a special summit in April 2021, it agreed to the Five-Point Consensus peace plan, which called (among other things) for an immediate cessation of violence and inclusive political dialogue. But hampered by wishful thinking and its own operating doctrine of “non-interference” in the internal affairs of member-states, it has since struggled to respond to the military junta’s near-total lack of cooperation in the implementation of the agreement.

At the last ASEAN Foreign Ministers’ Meeting in early August, the bloc finally appeared to lose patience with Naypyidaw. The meeting took place less than two weeks after the military junta executed four political prisoners, despite a personal plea from Hun Sen, the prime minister of Cambodia, the current chair of ASEAN. In an ASEAN Chairman’s statement, the Cambodian government described the executions as “highly reprehensible” and said that they signified the military administration’s “gross lack of will” to implement the Five-Point Consensus.

While the language of the meeting’s traditional joint communique was watered down at the military junta’s request, it nonetheless recommended that the latter’s cooperation with the Five-Point Consensus be reviewed at the ASEAN Summit in November, in order “to guide the decision on the next steps.” It said this should be conducted “consistent with Article 20 of the ASEAN Charter,” which states that “non-compliance” or a “serious breach” of the Charter can be referred to the ASEAN Summit for a response. Saifuddin appears to be demanding that ASEAN decide in advance on what its response will be, given the likelihood that the junta’s efforts to implement the Consensus will be found wanting.

Saifuddin has long made his own preferences known. He is the only ASEAN foreign minister who has publicly met with members of the NUG, and he has issued several calls for his Southeast Asian colleagues to follow suit.

According to a statement from the advocacy group ASEAN Parliamentarians for Human Rights, whose representatives also met yesterday with Saifuddin, the Malaysian envoy said that there “should be an inclusive and fair consultation with all stakeholders in Myanmar,” including the NUG and National Unity Consultative Council (NUCC), an associated consultative body. “Then there should be a framework with a clear endgame, which includes a return to democracy in Myanmar,” he added.

Within this framework, there is a lot of detail that would need to be filled out. In particular, any ASEAN strategy would have to deal with the reality that neither side in Myanmar’s struggle currently seems willing to compromise, such is the depth of hostility and mistrust on both sides. Nonetheless, Malaysia’s foreign minister is well placed to call for changes to ASEAN’s Five-Point Consensus, which is looking more and more out of step with the situation in Myanmar with every passing month.