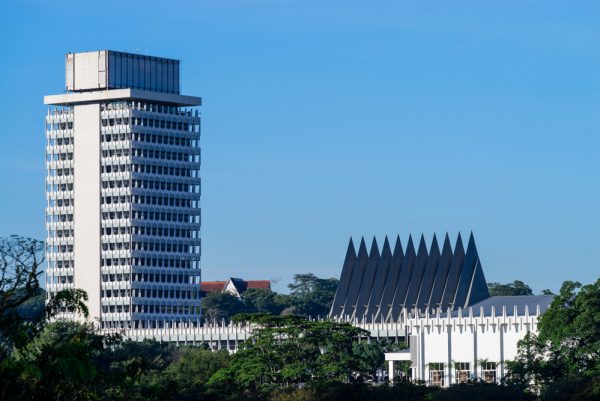 The new law is intended to stabilize Malaysian politics ahead of the next general election, which is due before September 2023.

The Malaysian Houses of Parliament in Kuala Lumpur, Malaysia.

Malaysia has passed its long-awaited law against “party-hopping,” which will discourage elected lawmakers from switching political parties, following a wave of defections that has greatly destabilized the country’s politics over the past few years.

The lower house of parliament passed the law yesterday with an overwhelming majority, and it should be tabled in the upper house next month; if approved, it will come into effect shortly after, most likely in the first week of September.

Under the new law, Reuters reports, any lawmaker who decides to change parties after being elected would lose their position in parliament. This includes those who stand as independents and later decide to join a political party.

The new law is intended to stabilize Malaysian politics ahead of the general election that is due to be held by September 2023. After decades of relative stability and predictability under the coalition dominated by the United Malays National Organisation (UMNO), Malaysia has seen two coalition governments collapse since February 2020 amid near-constant political jousting and maneuvering. These collapses have been at least partly facilitated by lawmakers who have switched their party affiliations while holding on to their seats in parliament. A total of 39 parliamentarians have changed parties since 2020, and party-hopping was also important in weakening the UMNO-led government of Prime Minister Najib Razak which was defeated in the 2018 general election.

Prime Minister Ismail Sabri Yaakob said in a statement that the law was “important to ensure long-term political stability” ahead of the next general election. In a speech explaining the proposed constitutional amendments earlier this week, the Malaysian leader said that the issue involved “the mandate or trust of the people who elect their representatives in the Lower House,”  and that the passage of the law would help prevent a state of “endless political crisis for the country.”

The law enjoyed nearly universal support in the lower house – the only abstentions were 11 lawmakers who were absent – and Ismail Sabri described it as “significant in the country’s history because it was produced through negotiation and discussion between the government and the opposition.”

Indeed, the Anti-Party Hopping Bill was one of the key points in the Memorandum of Understanding on Transformation and Political Stability that was signed last September between Ismail Sabri’s administration and the opposition Pakatan Harapan (PH) coalition, which won the 2018 election but collapsed amid backroom maneuvering in February 2020.

The MoU, which was negotiated after Ismail Sabri was sworn into office last August, was intended to transcend the country’s political impasse and focus on issues like recovery from the COVID-19 pandemic. The MoU also aimed to ensure equal membership in parliamentary special committees for both government and opposition lawmakers and to grant the opposition leader the same remuneration and amenities as a minister.

The overwhelming bipartisan support for the passage of the Anti-Party Hopping Bill is a positive indication that the government and opposition figures can work together on issues of broad national import, though it is unlikely the country’s slow-motion political crisis will be solved by legal amendments alone.

As Law Minister Wan Junaidi Tuanku Jaafar said following the law’s passage yesterday, “This Bill is not a 100 percent solution to all our problems, but a first step.”