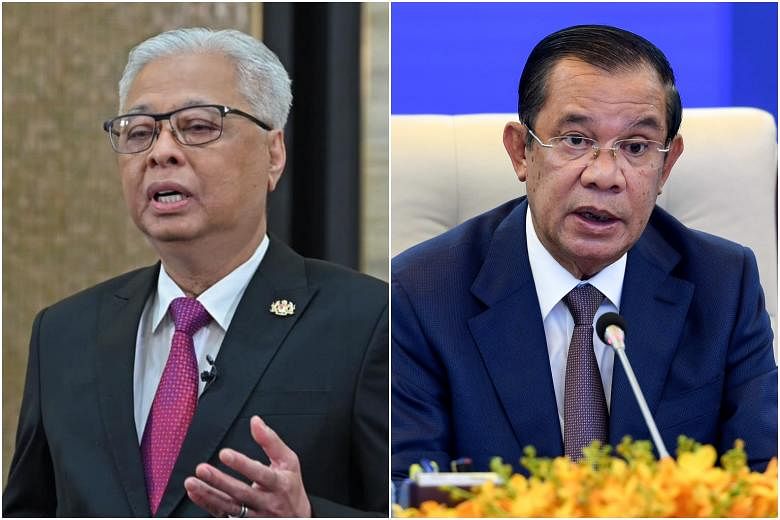 KUALA LUMPUR – Malaysia Prime Minister Ismail Sabri Yaakob on Tuesday (Jan 25) emphasised the urgent need for cessation of violence against civilians and release of political prisoners in Myanmar during a call with Prime Minister Hun Sen of Cambodia, the current chair of Asean.

The call took place at Mr Hun Sen’s request, following his controversial visit to Myanmar on Jan 7 and Jan 8. He was the first foreign leader to visit the country since the junta seized power from political leaders.

Critics have expressed concern that Mr Hun Sen’s visit could be construed as legitimising the junta’s rule, due to Cambodia’s position as the Asean chair this year.

In a statement released by the Malaysian Foreign Ministry on Tuesday, Mr Ismail emphasised Asean’s positions on Myanmar, including the bloc’s decision to invite a non-political representative from the country to high-level Asean meetings.

Under Brunei’s leadership last year, Asean barred Myanmar’s junta leaders from attending the high-level meetings due to its failure to fulfil Asean’s Five-Point Consensus on the post-coup situation.

The blueprint calls for a halt to violence, inclusive dialogue, the appointment of an Asean special envoy who would visit Myanmar to meet all parties concerned and facilitate dialogue, as well as the provision of humanitarian aid.

The key points – reached between Asean leaders and the junta in April last year – have not been achieved, with political leaders and activists still in prison and continued reports of violence against civilians.

Besides Malaysia, Mr Hun Sen has also had calls with Singapore Prime Minister Lee Hsien Loong and Indonesia’s President Joko Widodo to brief them about the situation in Myanmar.

He has defended his trip, saying it was made to “plant trees” and not “cut them down”. Cambodia, he has said, has pushed to engage Myanmar’s junta leaders instead of isolating them since it assumed chairmanship of Asean.

This in turn drew the ire of Mr Hun Sen, who labelled Datuk Seri Saifuddin as “arrogant and impolite” during his call with Mr Widodo last week.

The Myanmar coup on Feb 1 last year has drawn widespread civilian protests. According to reports, more than 1,400 protesters have been killed by security forces so far. Over 8,000 people have been detained, including political leaders from Ms Suu Kyi’s party.