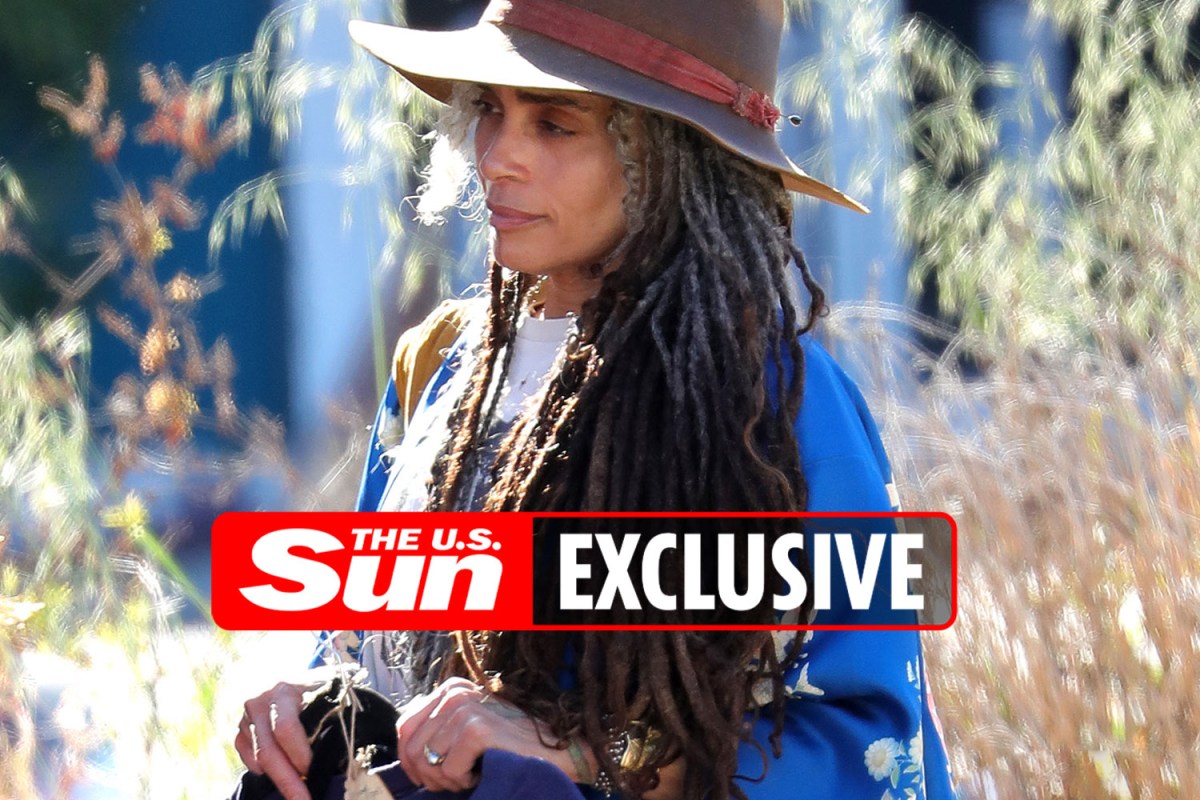 LISA Bonet appears in no hurry to move on after husband Jason Momoa deleted their divorce announcement, as she’s been photographed with her ring on amid reconciliation rumors.

The 54-year-old actress, who has been with the Aquaman star for 16 years and married since 2017, was snapped for the first time since Jason posted the news in January.

He has now removed the statement and reports in recent weeks suggested they were already back living together again at their Topanga Canyon home.

Photographs exclusively obtained by The Sun show Lisa looking effortlessly beautiful with her long hair in dreadlocks and a brown fedora hat with orange trim.

Lisa went make-up free and carried a tote bag as she browsed the stores near her home, spending some time chatting to a tattooed stall owner as she look through items of clothing.

She was seen holding up an oversized blue Keith Richards t-shirt.

The star and her husband have matching unconventional wedding rings and Lisa’s reported pearl set in gold was visible on her left hand in the new photographs.

She also showed off a unique long piece of jewelry in her nose, years after getting her septum pierced.

It comes after Jason was spotted in January without his ring on his first outing since announcing their split, although photographs on his Instagram show he rarely wears a band.

Jason was later seen in exclusive Sun photographs living in his $750K RV in a friend’s front yard and has since teased he has been away filming a new project.

He was last seen supporting his stepdaughter Zoe Kravitz, 33, with her boyfriend Channing Tatum at the London premiere of The Batman after she was cast as Cat Woman alongside brooding Robert Pattinson.

The Justice League star beamed as he posed for photographs last month on the red carpet with his two children with Lisa, 14-year-old daughter Lola, and son Nakoa-Wolf, 13.

Although he refrained from talking too much about his split to the waiting press, he insisted they are “still family” and posted gushing support for Zoe on social media.

A source previously told Hollywood Life that he had moved back into the family home in February, although it was never confirmed after he removed his split post.

The insider claimed on February 25: “Jason moved back in with Lisa about two weeks ago and they are very much back together.

“They decided to work on things rather than throw in the towel because they have so much invested in each other.”

The source commented that their children are “obviously thrilled” about their parents getting back together and added: “Everyone is really hoping that they can make this work this time around.”

The Sun has reached out to Jason and Lisa’s reps for comment.

It read: “We have all felt the squeeze and changes of these transformational times… A revolution is unfolding – and our family is of no exception…

“Feeling and growing from the seismic shifts occurring

“That we are parting ways in marriage.

“We share this not because we think it’s newsworthy – But so that – as we go about our lives we may do so with dignity and honesty.”

Jason continued: “The love between us carries on, evolving in ways it wishes to be known and lives.

“Our devotion unwavering to this sacred life & our Children.

Jason shared several photos along with the statement, including tall flags, and what appeared to be one of his children holding a bird.

It is not known if he has officially moved out of their hilltop residence, thought to be worth $3.5million, and The Sun can confirm they have yet to file papers in Los Angeles.

The couple met in a New York jazz club through mutual friends in 2005.

Speaking with James Corden on The Late Late Show, the actor previously said: “We just happened to be in the right place at the right time.

“I actually had dreaded my hair for her. I had dreadlocks, she had dreadlocks. I literally turned my head around and I see her and she goes, ‘I’m Lisa.’

“I turned around to my friend and I screamed. I had fireworks going off inside. I convinced her to take me home because I was living in a hotel.”

The actor has loved Lisa for many years from afar, as he previously described her as his “dream girl.”

“[She was] literally my childhood crush. I mean, I didn’t tell her that. I didn’t let her know I was a stalker until after we had the kids,” he told Esquire.

He added that marrying the love of his life had given him a lot of confidence in his career in Hollywood.

Jason joked: “If someone says something isn’t possible, I’m like, ‘Listen here, I married Lisa Bonet. Anything is f***ing possible.'”