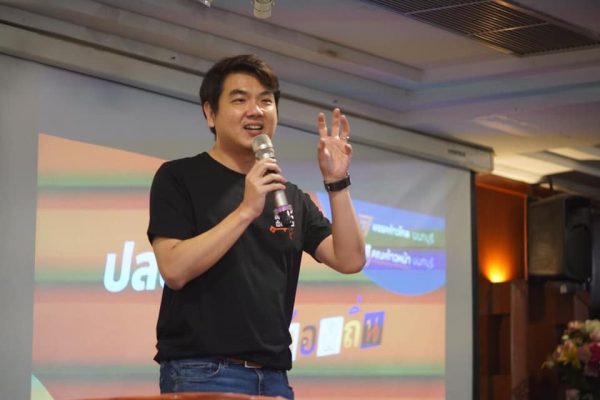 On Monday, police in Thailand charged a prominent opposition politician under the country’s royal defamation law after he issued calls for reform to the country’s powerful monarchy, the latest government critic to be charged under the controversial statute.

Piyabutr Saengkanokkul, 42, is the second former leader of the disbanded Future Forward Party to be charged under Section 112 of Thailand’s Criminal Code. Commonly known as the lese majeste law, the statute criminalizes any criticism of the king or the royal family and carries punishments of up to 15 years imprisonment.

Piyabutr, an academic who serves as secretary general of the Progressive Movement, a reformist political group, has been charged over a tweet in October last year, in which he argued that Section 112 and certain parts of Thailand’s constitution be improved to prevent the rampant abuse of the law to silence dissenting viewpoints. In essence, Piyabutr has been charged with lese majeste for criticizing lese majeste.

“How can the Thai society move forward when academic discussions can be prosecuted?” Piyabutr said, after answering a police summons in Dusit, Bangkok, on Monday, according to Bloomberg. “We should be able to discuss the issue of monarchy reforms in a safe space, which has been my mission to establish.”

Thanathorn Juangroongruangkit, the leader of the Future Forward Party, is also facing lese majeste charges. In January 2021, he was charged under Section 112 shortly after a Facebook Live stream in which he criticized the government’s COVID-19 vaccine procurement program. In particular, he alleged that there had been favoritism in the awarding of a vaccine production contract to Siam Bioscience, a private company owned by Thailand’s King Vajiralongkorn.

Formed in 2018, Future Forward advanced a liberal platform focusing heavily on reducing the political power of the military, which seized power in a coup in 2014 under Prayut. It came third in the 2019 general election. In February 2020, the party was disbanded on a technicality, and Thanathorn was banned from politics for 10 years.

The banning of the party was one of the catalysts for the wave of youth-led protests that unfolded over the second half of 2020, airing calls – political demands that are unprecedented in modern times. As Chris Baker and Pasuk Phongpaichit write in the revised edition of their classic text “A History of Thailand,” “A taboo had been broken in spectacular fashion.”

However, by early 2021, the protest movement had petered out due to COVID-19 and the politically motivated application of the lese majeste law, which was wielded against key protest leaders. Last week, the number of people charged under Section 112 passed 200, according to Thai Lawyers for Human Rights and the International Federation of Human Rights (FIDH), most of whom are “pro-democratic activists and protesters who exercised their right to freedom of expression, including online.”

Among the latest lese majeste charges were last week’s arrest and charging of three social media influencers for producing a promotional video that they produced for the Lazada e-commerce network in May. In the words of the Bangkok Post, the advertising material was “alleged to have obliquely referred insultingly to royalty.”

Royal defamation prosecutions have surged since Thailand’s Constitutional Court ruled last year that protesters’ demands to reform the monarchy violated a provision in the military-drafted constitution that bans any move to “overthrow” the institution. According to Bloomberg, more than 40 cases have been filed under the lese majeste law this year alone.

“At the current pace of prosecutions,” FIDH’s Secretary General Adilur Rahman Khan noted in a statement last week, “and given the traditionally high conviction rates in lese majeste trials, Thailand may soon become one of the countries with the highest number of political prisoners in the region.”

It is hard not to connect the escalation in the use of the law to Thailand’s next national election, which must by held by March 2023, during which Prayut’s military-backed party will likely struggle to cobble together another ruling majority. The roaring success of the independent Chadchart Sittipunt, a minister in the government that was overthrown  by Prayut’s coup d’etat in 2014, at last month’s Bangkok gubernatorial election points to the widespread support for more reformist policies.