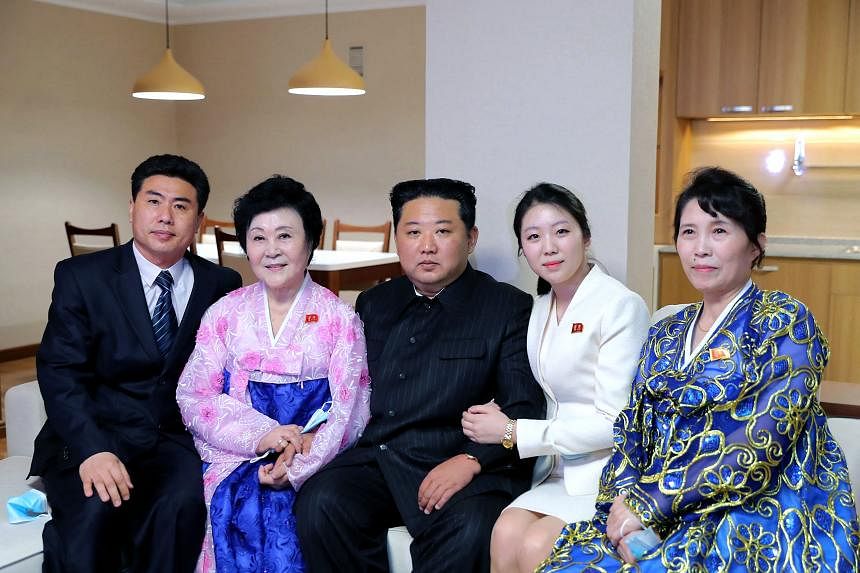 SEOUL (NYTIMES) – When a brand-new luxury residential district opened in the North Korean capital, Pyongyang, this week, the country’s leader, Kim Jong Un, said it would be reserved for his most elite supporters, those he called “true patriots”.

Among them was the nation’s top state TV news anchor, Ri Chun Hee.

At a ceremony on Thursday (April 14), Mr Kim not only presented one of the two-storey apartments to the legendary anchorwoman. He also gave her a tour of her new home while holding her hand. Naturally, she narrated it all in a state media video.

Known both inside and outside the hermetically sealed nation for her soaring, bombastic and emotional news readings, Ms Ri, 79, has been a staple on North Korean television on and off for more than 50 years.

A mouthpiece of the country’s dictators since 1971, she has guided her countrymen and women through major developments like nuclear and missile tests, as well as the deaths of the country’s past leaders: Kim Il Sung in 1994 and Kim Jong Il in 2011.

She could seem to melt with emotion while delivering news about the country’s current leader, who is revered as a god by North Korean citizens. But to South Korean viewers, when she has turned to more alarming announcements, such as the North’s weapons tests, her warlike cries could seem as bloodcurdling as the information itself.

South Korean government and intelligence monitors – as well as South Koreans in general – have braced themselves whenever Ms Ri appeared on TV and opened what they call a “mouth that fires out cannons”.

“Her steel-grinding voice gives the enemy the shudders,” a 2008 issue of the North Korean magazine Chosun said of Ms Ri.

In North Korea, she holds the title of “labour hero”, according to Chosun. Abroad, she is known as “the pink lady”, for the colour of the traditional Korean attire she wears to deliver news reports.

In the video of her house tour this week, she was far more operatic than bombastic. She said her new home felt “like a hotel” and was furnished with every amenity she needed.

State media video showed a spacious riverside apartment with shiny wooden floors, a living room furnished with a white five-seat sofa, a spacious bedroom, a kitchen with an L-shaped counter and a six-person dining table. The apartment also has a study, along with a veranda that offered a view of downtown Pyongyang. The images showed no sign of a TV.

The ceremony was widely publicised by the North Korean state, which published photographs of Mr Kim and Ms Ri taking the tour. Among others rewarded with an apartment at the complex were members of the state media, whose mission is also to spread propaganda.

Such largesse for those deemed loyal to the regime is not uncommon in North Korea. Mr Kim Jong Il gave luxury cars, watches, liquor or houses to his close aides. The current leader has given mostly verbal encouragement to officials – or has purged them. But he has recently sought to strengthen his support base by providing luxe apartments to high-ranking officials, even as the country has endured economic travails made worse by pandemic-prompted isolation and a diplomatic stalemate with much of the world.