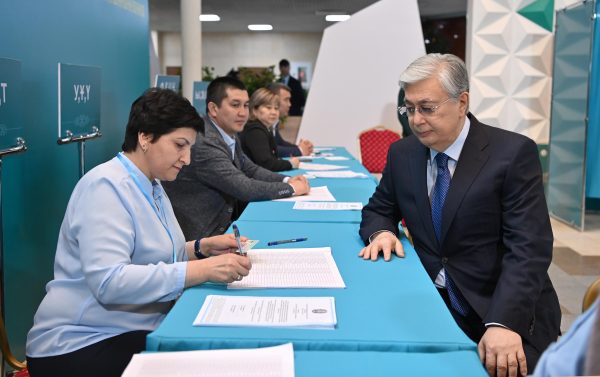 On June 5, Kazakh voters approved a package of constitutional reforms that, among other things, will remove language referring to Kazakhstan’s first president, Nursultan Nazarbayev, as “elbasy” or “leader of the nation.” Coming six months after the deadly unrest now referred to as “Bloody January,” the constitutional referendum was characterized by the government as a step in building a “New Kazakhstan.”

According to preliminary results, 77.18 percent voted in favor of the package of reforms, which were published for public review just one month ago. Turnout has been estimated at around 70 percent. Voters were asked to simply accept or reject the package of 56 changes affecting more than 30 separate articles of the constitution. Colleen Wood explained some of proposed reforms last month, concluding, “Many of the amendments are simply reinstating mechanisms of checks on presidential power that previously existed, rather than materially changing the relationship between state and society, as Tokayev claims.”

The referendum was heralded by Tokayev as shifting Kazakhstan from a “super-presidential form of government to a presidential republic with a strong parliament.” This mantra echoes Nazarbayev, who, in 2017, proposed a number of constitutional changes aimed ostensibly at redistributing power. Those proposed changes were passed through the legislature and signed into law in March 2017, but the parliament remained a weak institution relative to the executive.

The stripping of Nazarbayev’s elbasy status in the constitution is one of the more discussed changes, but perhaps not as significant as suggested. Nazarbayev’s star had already faded following the January protests and violence, which Tokayev blamed on unknown terrorists but has also called a coup attempt (by whom has not been explained clearly). During the unrest Tokayev unilaterally stripped Nazarbayev of his position as head of the National Security Council, which a 2018 law granted the first president lifetime rights to lead. After the dust settled, prominent members of the Nazarbayev family network resigned from their top posts or were detained, such as his nephew, Kairat Satybaldy.

As RFE/RL noted in its coverage of the referendum, although the approved changes do remove the constitutional provisions (contained in the Law on  of the First President of Kazakhstan) that granted Nazarbayev and his family immunity from prosecution, “they will still enjoy that privilege under the general law on ex-presidents.”

Other changes in the constitution are also nods toward Nazarbayev, including a measure that now will bar relatives of the president from holding government positions. The new provisions also bar the president from membership in a political party while in office. In late April, Tokayev preemptively stepped down from his leadership post in Kazakhstan’s ruling party, Amanat, which until March was named Nur Otan.

The referendum also will see the lower house of parliament, the Mazhilis, shrink from 107 members to 98 with the removal of nine seats filled by the presidentially-appointed Assembly of the Peoples of Kazakhstan. The Assembly’s seats will diminish to five and be transferred to the Senate. Amanat holds 76 out of 98 elected seats in the current Mazhilis.

The referendum’s critics decried the process as rushed, with only a month for voters to review the proposed changes and no public comment period to suggest alterations to them. An RFE/RL reporter who visited polling station in Qaraghandy reported that “not all residents understood exactly what they were voting for and what specifically would change in the Constitution.” Eurasianet’s reporters recounted similar encounters with confused voters.

Tokayev rose to political prominence under Nazarbayev’s wing. He became acting president in March 2019 when Nazarbayev resigned and in June of that year Tokayev was elected president. He’ll face his first electoral contest in a post-Nazarbayev Kazakhstan in 2024. The parliament, meanwhile, was elected last year and isn’t set for a vote until 2026.