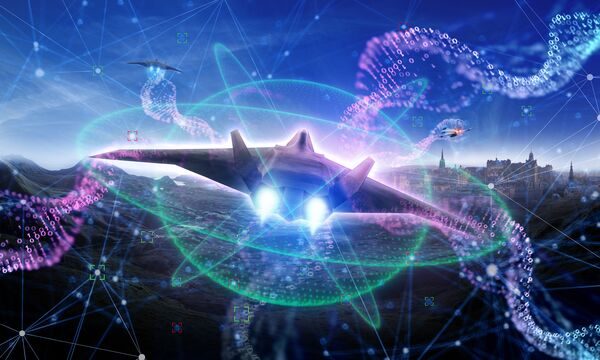 The United Kingdom and Japan have agreed to the joint development of sensor technology for the both the Tempest and F-X future combat aircraft programs, expanding the military-technology partnership between the two nations.

Signed by both the U.K. and Japanese governments on February 15, the Letter of Arrangement (LOA) covers cooperative work on a universal radio-frequency (RF) sensor technology, known as the Japan and Great Britain Universal Advanced RF system (JAGUAR).

This new advanced sensor technology is meant to be used for the U.K.-led Tempest, which is being developed under the Future Combat Air System (FCAS) program, and the Japanese next-generation F-X (unofficially referred to as the F3) program.

“The JAGUAR could enable the Armed Forces to better detect future threats from air, land and sea, quickly and accurately locating targets and denying surveillance technology operated by our adversaries,” the U.K. Ministry of Defense (MoD) said at a press release.

“The JAGUAR enables us to instantly observe a wider area than before with digitally computed multiple receiving beams,” it said in a tweet on February 15. “The Japanese Ministry of Defense expects that the outcomes of this cooperative research will be utilized to enhance the capability of our RF sensor for a fighter in the future,” it added.

The U.K. Ministry of Defense said this joint work is scheduled to start in April.

“The designing, building, and evaluating the JAGUAR system will take around five years, involving input from Leonardo UK and Japanese industry. Two demonstrators will be built within the project, one in each country, with the work and learning shared to maximise national expertise,” the ministry added.

News of the latest bilateral agreement came less than two months after the two countries announced plans to develop a future fighter jet engine demonstrator as part of their partnership. Rolls-Royce is leading the engine demonstrator effort for the U.K. while the Japanese lead will be IHI Corporation.

Both the Tempest and F-X have similar timelines, being slated to enter operational service from the mid-2030s. That enables the U.K. and Japan to pursue joint technologies for their fighters.

In the U.K., the Tempest is being developed under the Future Combat Air System (FCAS) program, undertaken by the Team Tempest industry partners of BAE Systems, Leonardo UK, MBDA UK, and Rolls-Royce.

In December 2020, the Japanese Ministry of Defense chose U.S. firm Lockheed Martin as the candidate for an integration support company for the F-X program, in large part to ensure interoperability between the Japan Self-Defense Forces (JSDF) and U.S. forces.

Japan and the U.K. also have progressed their joint program to undertake the co-development of a Joint New Air-to-Air Missile (JNAAM). This joint research project, initiated by the two nations in 2014, is scheduled to conclude by the end of FY 2023, which is March 2024 in Japan.

On the Japanese side, the Ministry of Defense is looking to integrate advanced radio-frequency (RF) seeker technologies developed by Mitsubishi Electric for the AAM4B missile, with the aim of enhancing the accuracy and performance of the BVRAAM and supporting the development of the JNAAM.

The JNAAM program is Tokyo’s first defense equipment project with a partner other than the U.S. and marks a potential turning point for the country’s arms export policy. The partnership could boost Japan’s defense-related exports, benefiting a domestically dependent industry where business has been sluggish.

In addition, any collaboration using Japan’s advanced defense technology could strengthen the nation’s relationship with the U.K., which Tokyo considers a “quasi-ally,” while boosting its own defense capabilities – as if the Anglo-Japanese Alliance signed in 1902 were emerging again.