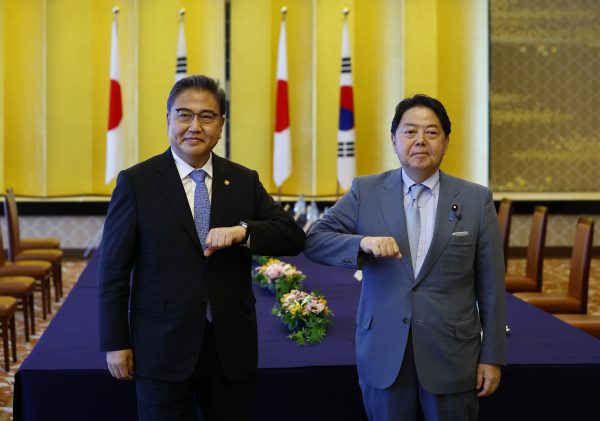 South Korean Foreign Minister Park Jin, left, and Japanese counterpart Hayashi Yoshimasa pose for a photo as they bump elbows to greet each other before their talks in Tokyo, Monday, July 18, 2022.

The foreign ministers of South Korea and Japan reaffirmed Monday the importance of bilateral ties and the three-way relationship with the United States as they renewed efforts to mend relations amid the war in Ukraine and other global tensions.

Park Jin, South Korea’s top diplomat, and his Japanese counterpart Hayashi Yoshimasa agreed to work together on the nuclear threat from North Korea and on the need to resolve a dispute over Japan’s colonial-era forced mobilization of Korean laborers, according to the two foreign ministries.

The countries’ ties have been strained mostly over historical issues, including forced labor leading up to and during World War II.

At the heart of the dispute are South Korean court rulings in 2018, which ordered two Japanese companies, Nippon Steel and Mitsubishi Heavy Industries, to compensate forced Korean laborers. The Japanese companies have refused to comply with the rulings, and the former laborers and their supporters responded by pushing for the forced sale of corporate assets of Nippon Steel and Mitsubishi.

The ministers shared a view that the disputes over the forced laborers must be resolved at an early date, the South Korean Foreign Ministry statement said. It quoted Park as saying South Korea would seek a resolution of the dispute before the sales of the two Japanese companies are made in South Korea.

According to the Japanese statement, Hayashi told Park that both sides need to build a constructive relationship based on the normalization of relations in 1965. Tokyo has long maintained that all compensation issues had been settled by then.

Since taking office in March, South Korea’s new conservative government led by President Yoon Suk Yeol has been pushing to improve ties with Japan and bolster a trilateral security cooperation with Washington and Tokyo to better deal with North Korean nuclear threats.

At the start of the talks in Tokyo, Park and Hayashi bumped elbows and posed for cameras at the official guest house as they conversed softly in English. Both have attended schools in the U.S., and Park has also studied in Japan.

The visit, the first by a South Korean foreign minister since November 2019, comes after the assassination of former Prime Minister Abe Shinzo, considered an influential figure in shaping Japan’s foreign policy.

Park expressed his condolences on Abe’s death. Park is scheduled to stay in Japan through Wednesday and may meet Japanese Prime Minister Kishida Fumio.

With Kishida’s LDP having emerged victorious in recent upper house elections, he will not have to face elections for three years. That gives him a freer hand in dealing with the Japan-South Korea relationship.

Park and Hayashi had also met ahead of the South Korea presidential inauguration in Seoul in May, as well as in Bali, Indonesia, for the Group of 20 meeting earlier this month.

The South Korean Foreign Ministry in July launched consultations with lawyers and activists representing the Korean forced laborers and other experts to collect opinions on how to resolve the dispute.

Besides painful history, the two nations also share a long-running territorial dispute over islands that are controlled by Seoul but also claimed by Japan. Tokyo calls them Takeshima and South Korea calls them Dokdo.

President Joe Biden’s administration has tried to bring the two Asian democracies to work closer together on security and regional issues amid the war in Ukraine and tensions including threats from North Korea and saber-rattling from China.

North Korea this year stepped up missile and artillery tests in what is seen as an attempt to pressure Washington and Seoul to relax international sanctions against Pyongyang.

About 20 years ago, North Korea reversed years of denial and acknowledged it had kidnapped Japanese citizens and returned some to Japan. But Japan believes more are still in North Korea.