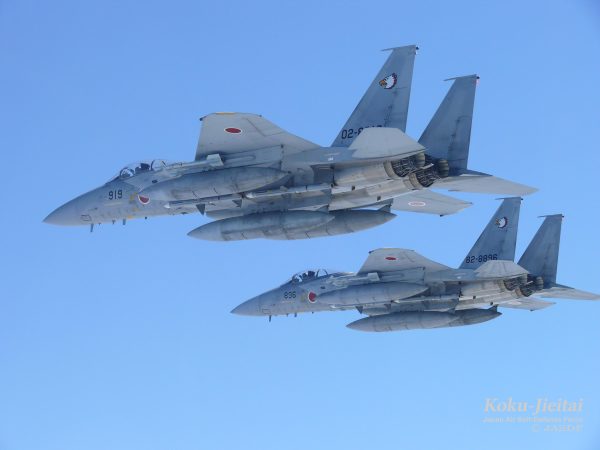 It was the second highest number of scrambles in a single year, representing the worsening security environment surrounding Japan.

The Japan Air Self-Defense Force (JASDF) scrambled its fighter aircraft 1,004 times in fiscal year 2021 (FY 2021) in response to foreign military aircraft approaching the country’s airspace. That marked the second-highest total recorded in a year since such operations began in 1958, providing an indication of rising regional tensions.

The Ministry of Defense (MoD) in Tokyo said in a statement on April 15 that the overall number of scrambles was up by 279 from the previous fiscal year. It also said that out of the foreign aircraft, only two Russian aircraft violated Japanese airspace.

The latest announcement by Tokyo comes amid heightened tensions between Japan and some neighboring countries such as China and Russia over territorial disputes.

JASDF fighters responded 722 times (72 percent of the total) to movements by Chinese aircraft in the area, up 264 from FY 2020 and the second-largest yearly total, according to the MoD.

Most of these incidents involved the JASDF’s Northern Air Defense Force (217 scrambles) and the Southwestern Composite Air Division (652). The latter oversees an area that includes the disputed Senkaku/Diaoyu Islands in the East China Sea, which are controlled by Japan but also claimed by China and Taiwan.

The largest number of scrambles ever carried out by the JASDF within a year was in FY 2016, reaching 1,168. At the time, Beijing had stepped up its claim to the uninhabited islands after Japan purchased three of them from private citizens and brought them under state control in 2012.

Japan’s Defense Minister Kishi Nobuo emphasized at a press conference on April 15 that the JASDF dispatched fighters 12 times to intercept People’s Liberation Army Navy Air Force (PLANAF) aircraft that were spotted crossing the Miyako Strait, which is Beijing’s strategic entry way into the western Pacific located between the southern Japanese islands of Okinawa and Miyako. In contrast, the JASDF was dispatched in such air interception operations only four times during FY2020.

Kishi said that Beijing “has been intensifying activities considered to be intelligence gathering,” adding such flights had become “diversified and sophisticated.”

“In China, moves to rapidly develop a wide variety of unmanned aircraft have been seen,” he cautioned.

Data released by the Japanese MoD also shows that two Xian H-6 bombers, along with two Russian Tu-95 bombers, were spotted crossing the Tsushima Strait, which connects the Sea of Japan (East Sea), the Yellow Sea (West Sea), and the East China Sea on November 19, 2021. Those bombers have extended the scope of their activities from the East China Sea into the Pacific Ocean in recent years.

In its 2021 Defense White Paper Japan expressed “strong concerns” over China’s activities in the East and South China Seas.