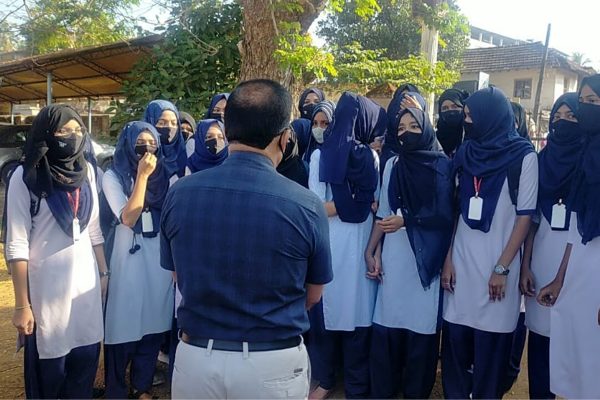 Indian girl students who were barred from entering their classrooms for wearing hijab, a headscarf used by Muslim women, speak to their principal outside the college campus in Udupi, India, Friday, February 4, 2022.

The wearing of hijab (headscarf) by Muslim women triggered heated debate and discussion in India recently when teenage Muslim students were barred from classes for wearing the hijab to college. The incident quickly snowballed, with other educational institutions in the southern state of Karnataka refusing to allow hijab-wearing students to attend class.

The issue has triggered discussion over whether wearing the hijab is a part of South Asian culture or a Middle Eastern import.

South Asia has generally been flexible on religious dress codes. This flexibility lies in the region’s multireligious character and culture of tolerance. India is the birthplace of several world religions including Hinduism, Buddhism, Sikhism, and Jainism. The Sufi variant of Islam has been present in South Asia since the 7th century CE and is a part of the social ethos.

Secularism, as defined by the Indian and Bangladeshi constitutions, means neutrality between all religions, rather than the state distancing itself from religions, which is the Western conception of secularism or a secular society. As such, in most South Asian countries, the hijab is not banned or restricted from being worn in public places. Neither is its wearing enforced by the state.

South Asian Islam is highly accommodative and syncretistic due to the Sufi contribution to the spread of Islam in South Asia. Early preachers of Islam in South Asia allowed local people to “retain their cultures and traditions, leading to a regional blend that differed significantly from the way Islam was practiced in its Arab heartland.” Indeed some have referred to this Islamization by Sufis as half-Islamization.

Some scholars argue that women in South Asia have for centuries loosely covered “their heads and bosoms, regardless of religion, shielding themselves from unrelated men as well as from the hot sun.” The facial veiling or covering the head exists among both Hindus and Muslims. However, to what extent one influenced the other remains unclear. This strengthens the argument that covering the head is not entirely an alien practice for South Asian women.

That said, the current form of veiling or the hijab appears to have come from the Middle East. Some argue that the Middle Eastern notions of “hijab” and “niqab” have invaded all Muslim societies across the world, including South Asia.

That there is a rapid increase in hijab use, especially by South Asian educated middle-class women, is evident. As a Bangladeshi girl observed, “even many ultra-modern females are using the hijab as a part of their fashion and beautiful dress code.”

So why are an increasing number of women using the hijab? An important reason could be heightened religiosity. Certainly, the hijab has a religious connotation. A Bangladeshi medical student said that she wears the hijab not only because it protects her “but it also helps to gain Allah’s satisfaction.” A Malaysian feminist scholar pointed out that increased hijab wearing is the outcome of “enforcement of Islamic values based on Quranic teachings” and is largely related to men enforcing it “to safeguard women and their honor.”

The Quranic teaching about Muslim women’s dress code is clearly mentioned in the Surah al-Ahzab, Ayah 59: “Oh Prophet, tell your wives and your daughters and the women of the believers Yudneen (to put over from above to below) the Jilbaab over their bodies.” The Quranic word, “Jilbaab” is largely defined by Islamic scholars as “a cloth which is hung loosely from the top of the head until the bottom which does not reveal the adornment of a woman.”

To some women, the hijab beautifies and dignifies them.

The hijab also appears to have become a symbol of national and ethnic identity. A Bengali-origin American, Nazma Khan, introduced World Hijab Day in 2013 “as a counter to the discriminatory and ridiculous attitudes against hijab users because of Islamophobia.”

A Pakistani scholar adds that “in countries like Pakistan where crimes against women are common, some women wear burqa because they feel safe in it.”

How did the hijab, which is a part of Middle Eastern culture, become so popular among South Asian women? Renowned Pakistani historian Mubarak Ali argues that Muslim rulers did not introduce hijab culture to South Asia. Rather, it was “the Saudi influence [that] may have prompted more people in South Asia to wear the burqa” and the hijab, he says.

Saudi or Wahabi influence on South Asians surged in the 1980s, when the Saudis along with the U.S. funded and supported the anti-Soviet insurgency in Afghanistan. The puritanical “Wahabi” version of Islam has deeply invaded South Asian nations since, with money flowing into Islamic education and charities. Additionally, Wahabism spread with petro-dollar enriched Middle Eastern countries drawing a large number of South Asian skilled and unskilled workers. Some scholars say that increasing influence of Wahabism encouraged South Asians to adopt Arab dress codes.

Patriarchy has also acted as a catalyst for the growing number of women wearing the hijab in South Asia. A renowned Pakistani scholar observed that “in patriarchal societies, there is a sense of honour attached to women’s bodies and sexuality. In the name of preserving honour, many men do not allow women to show their faces to strangers.” A Dhaka University professor added that Turkish television serials have made hijab-wearing fashionable. “The hijab used by female actresses in different Turkish mega serials has a very positive impact among tens of thousands of educated Bangladeshi females,” he said.

Although wearing a hijab is not a completely alien practice for South Asian women, nor is it something that was introduced to the region by Islam alone, the increasing use of the hijab in its current form seems to be the outcome of the rising influence of the Wahabi movement across the globe. Together with this, the patriarchal attitude and Turkish mega serials have also played a role in popularizing hijab culture in South Asia.