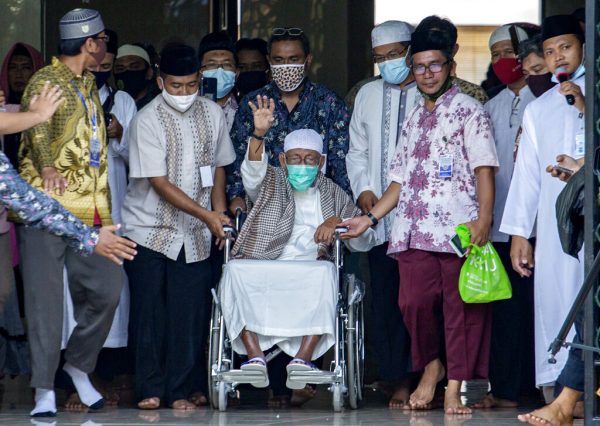 Over the past 60 years, Abu Bakar Bashir has come to be perceived as the face of Islamist extremism and terrorism in Indonesia. He has been associated with Pondok Pesantren Al Mukmin in Solo, Central Java, which he jointly founded with Abdullah Sungkar in 1972. The Islamic boarding school, also known as Pesantren Ngruki, came to be associated with Islamist radicals who were close to Jemaah Islamiyyah (JI), a radical terrorist group involved in bombings in Indonesia from 2000 to 2008, and which is still seen as a threat today.

The Life of Abu Bakar Bashir

Bashir, 84, was born in Jombang, East Java in 1938 to an Arab-Indonesian family. He attended an Islamic boarding school in Gontor, East Java and graduated from Al-Irsyad university in Solo in 1963. As early as the mid-1950s, he was involved in Islamist movements, including the Indonesian Islamic Youth Movement, becoming its head in 1961, and he later headed the Lembaga Dakwah Mahasiswa Islam in Solo. The body was essentially established to proselytize and propagate Islam among students, first on Muslim campuses and later, to all campuses in the country, with branches organized nationally throughout Indonesia. In 1967, together with Sungkar, he founded Radio Dakwah Islamiyyah Al-Irsyad and in 1969, Radio Dakwah Islamiyyah Surakarta, two Islamist radio stations. In 1976, four years after founding Pesantren Ngruki with Sungkar in 1972, the pair are believed to have become members of Darul Islam/Negara Islamic Indonesia. Following a falling out with DI leaders, Sungkar and Bashir became the key leaders of JI in 1993. After Bashir returned to Indonesia in 1999, he went on to become the head of Majelis Mujhidin Indonesia (2002) and headed Jemaah Anshorut Tauhid (2008), a splinter faction of JI.

Bashir’s key beliefs include the implementation of Sharia Law and an Islamic State in Indonesia. He has supported the use of violence against the state (jihad) and tactical migration (hijrah) when necessary to achieve the movement’s goals and has stressed the continuous need for preparation, including military preparation (i’dad), to achieve the goals of an Islamic State. In Indonesia, as part of his intent to establish an Islamic State, Bashir has refused to salute the Indonesian flag and abide by the pluralistic state ideology of Pancasila. For Bashir, the key guides to state administration are the Koran and Sunnah, and if a government, especially in a Muslim-majority state, uses “man-made” laws, then such a government should be opposed, including through the use of violence.

For both his beliefs and actions, Bashir has been imprisoned a number of times. In 1978, accused of subversion, he was imprisoned until 1982. Following the Borobudur bombing in Yogyakarta in 1985, which Bashir was widely believed to have planned, he fled to Malaysia. In 2000, Bashir was accused of being involved in the Christmas Eve bombings, which targeted churches in eight cities throughout Indonesia that killed 18 people but escaped imprisonment. In 2003, Bashir was arrested for his alleged role in the 2002 Bali bombing and later imprisoned for 30 months. Bashir was released after 26 months, in June 2006, after the Indonesian Supreme Court quashed his conviction. In 2011, for his link to the Jantho military camp in Aceh and for being the spiritual leader of JI, Bashir was once again jailed for 15 years but was released on January 8, 2021, after receiving a remission of 55 months of his sentence, in part due to his poor health and old age.

While Bashir has steadfastly held on to his hardline views even after being released from prison last year, he has announced a change in his position with regard to two tenets of his opposition to the Indonesian state and its symbols. In doing, he has come to be seen as a “new Bashir” who is more willing to accommodate Indonesia and its political and religious attributes. In January 2019, President Joko “Jokowi” Widodo announced that he was prepared to conditionally release Bashir from prison if he agreed to swear his allegiance to the unitary state of Indonesia and its national ideology of Pancasila, but Bashir refused to do so. He continued to argue that he would respect only the laws of God and not man.

However, according to his son Rohim, sometime in May of this, Bashir made a video recording in which he expressed his support for the ideology of Pancasila. This was because the first principle of the state’s ideology, the belief in one and only God, was based on tawhid, the Islamic principle that postulates the oneness of God. Prior to this, Bashir has consistently argued that those abiding by Pancasila were syirik, or committing the sin of idolatry or polytheism.

In addition to Bashir’s new position on Pancasila, on August 17, for the first time in Pesantren Ngruki’s history, Bashir attended the celebration of Indonesia’s Independence Day by holding a flag raising ceremony and singing the national anthem, “Indonesia Raya,” at the boarding school. The ceremony was attended by more than 300 people, including alumni of Ngruki, Muhadjir Effendi, the coordinating minister for human development and cultural affairs, and Gen. Boy Rafli Amar, the head of the Indonesian National Counter Terrorism Agency (BNPT). Since then, the Indonesian state flag has flown within the compounds of Pesantren Ngruki, unlike in the past, when Bashir argued that the Indonesian government was thogut –an evil authority.

Does Bashir’s recent about-face suggest that he is walking away from extremism and terrorism? Analysts have argued that there are usually a number of factors at play when extremists and terrorists abandon their views. First, this can be due to the disillusionment with the group’s strategies and tactics, especially when these involve attacking innocent civilians. Second, many members have abandoned extremism and terrorism after losing respect for a leader who may be seen to be fighting a battle that cannot be won. Third, many have abandoned their radical causes after the emergence of tactical and operational differences, especially when religious leaders try to direct military operations that often lead to disasters, defeats, or the death of many of the group’s members. Finally, many have also abandoned the radical cause when promises made by leaders are not honored. This includes the non-payment of salaries of fighters, and bad moral and ethical behavior on the part of top leaders and military commanders.

Explaining and understanding Bashir’s position on Pancasila and the state flag is important, given that he remains a leading and influential Islamic figure in Indonesia, especially among radicals. There is the view that Bashir may have softened his views on the Indonesian government, its ideology, and its flag due to old age, his more sober understanding of the state’s ideology, or even due to successful deradicalization programs by the BNPT, which Bashir has only undertaken on an ad hoc basis, all of which may help to reduce the threat of violence in Indonesia by jihadists.

Bashir has also argued that since most of Indonesia’s Islamic scholars (ulamas) support Pancasila, it must be in line with Islam, especially given that 90 percent of Indonesians are Muslims. It may also be due to the fact that Bashir’s traditional approach to achieving the goal of an Islamic state and the implementation of Sharia law has failed and he may want to adopt new strategies to attain them, including by accommodating the Indonesian authorities. In short, Bashir’s shift in position may only be tactical.

Has Bashir Abandoned Extremism and Terrorism?

While it is still early days, what is also clear is that while he may be able to come to terms with Pancasila as being consistent with Islam, this may not necessarily translate into his unstinting support for the Indonesian government. For Bashir, this accommodation may reflect the fact that an Islamic State and Sharia law are unlikely to be implemented in Indonesia in the short to medium term. In short, Bashir is likely to continue opposing the Indonesian Government as thogut, since he only believes in an Islamic State and the system of Khilafah, namely, a governmental system based on Islamic law, and not the democracy that Indonesia has been practicing.

Bashir’s tactical approach to Pancasila and the Indonesian national flag can also be understood within the context of Islamist warfare, especially in Indonesia, which he continues to view as Darul Harbi, a “territory of war.” Given that deception is part of warfare, the use of subterfuge, or hiyal, is justifiable for Muslims living in difficult situations. Hence, even though Bashir witnessed the flag-raising ceremony on August 17 at Ngruki, he did not stand during the ceremony, on the grounds that he was unwell. Similarly, while talking about supporting Pancasila, Bashir also talks of the “original Pancasila.” Often referred to as the Jakarta Charter, this line which was later deleted from the Constitution, included the “seven words” stating Muslims’ obligations to abide by Islamic law.

Still, there is a degree of moderation in Bashir today, first evident in his speech regarding Pancasila in May and again when Pesantren Ngruki, in Bashir’s presence, celebrated Indonesian Independence Day under the national flag, which has continued to fly over the boarding school ever since.