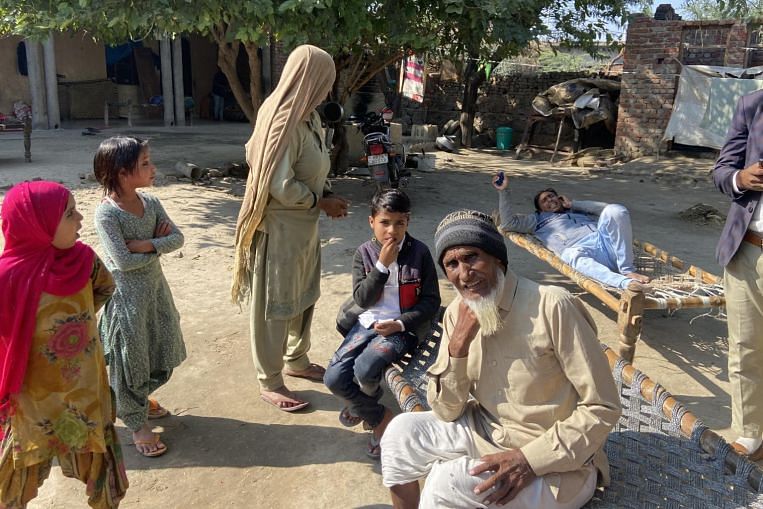 NUH (Haryana) – Sitting on a charpoy – a traditional woven bed – at home, Mr Dheen Mohammad grudgingly acknowledges that he got vaccinated last week.

The 65-year-old farmer, who lives in Chendeni village in Nuh, one of the country’s most backward districts in the northern state of Haryana, was surrounded by a group of vaccinators and local officials.

In early November, the district was singled out as among 50 in India with the lowest vaccination rates. A federal meeting noted at the time that only 35 per cent of the 164,000 people eligible for a jab had received one dose of a vaccine.

Mr Dheen Mohammad was among the vast majority who were fearful that vaccination would lead to infertility or even death.

But attitudes began to change as people started seeing their neighbours and other villagers getting vaccinated amid the promise of one million rupees (S$18,000) in infrastructure funds for fully vaccinated villages. There were rumours that state benefits from pensions to subsidised food would be suspended.

Vaccination centres outside ration shops disbursing subsidised rice and other grains also put pressure on those who had come to pick up food.

“We were scared that I wouldn’t get my pension because there was talk and then everyone was getting vaccinated. Now whatever has to happen, will happen,” Mr Dheen Mohammad told The Straits Times.

A daughter-in-law, who refused to come out of her room until the vaccinators were in the courtyard, remains the lone holdout among the six people in the family who were eligible for jabs.

The vaccinators, carrying a chiller box with vaccines, mostly do not press further when they come across diehards but vow to come back. They admit that it has been an uphill task in trying to dispel vaccine hesitancy.

India’s vaccination programme began slowly but a second devastating Covid-19 wave proved to be the wake-up call. The government placed vaccine orders, suspended exports for a period and production was cranked up in a country that is home to the world’s largest vaccine manufacturer.

Half of the population are now fully vaccinated and Covid-19 cases remain stable. But the country still has quite a distance to go, including on booster shots and inoculating women as well as children, as it continues to tackle the issue of vaccine hesitancy.

In Nuh, it is being tackled through a mix of positive reinforcement, including through incentives provided by private businesses, and exhortations by religious leaders in the predominantly Muslim district.

“We had to try everything we had,” said Captain Shakti Singh, divisional commissioner at Nuh.

Since November, Nuh has doubled its vaccination rate and 61 per cent of the population has already received at least one dose.

Local businesses played a big part in the turnaround by offering discounts and freebies. Chemists offered 10 per cent discount on medicines and petrol pump owners dangled half a rupee discount on a litre of petrol.

Over the past 1½ month, Mr Sunil Bansal, owner of motorbike showroom Sunil Motors, has given away 300 helmets and dinner sets to vaccinated motorbike customers.

“I have customers walking in saying, ‘we have got both our doses and now give us both things with the bike’,” said Mr Bansal, whose sales have held steady.

Across India, such incentives are being rolled out to woo vaccine holdouts.

In Karur district in Tamil Nadu, the administration arranged a lucky draw in which a washing machine, wet grinder, mixer grinder and pressure cooker were prizes for those who received a shot. In Rajkot district in Gujarat, goldsmiths agreed to give gold nose pins to women.

“This is positive discrimination,” said Captain Singh, who believed such incentives created a positive narrative around vaccines.

One key challenge remains the vaccination of women, which has been the focus of Ms Archana Kapoor, a film-maker and activist, founder of Smart, a non-governmental organisation that runs Radio Mewat, a community radio station.

“We work with women, who are often ignored, and we put out the message that her health is crucial for the family,” said Ms Kapoor, whose team of 106 volunteers is vaccinating up to 1,300 people a day.

The organisation highlighted, including through the community radio, how women from their own team had been vaccinated and debunked rumours of infertility by revealing that a team member was pregnant after getting vaccinated.

“Because of the credibility of Radio Mewat, we have had good results. It (getting vaccines) is a matter of choice. But then we don’t want anyone to be left behind.”