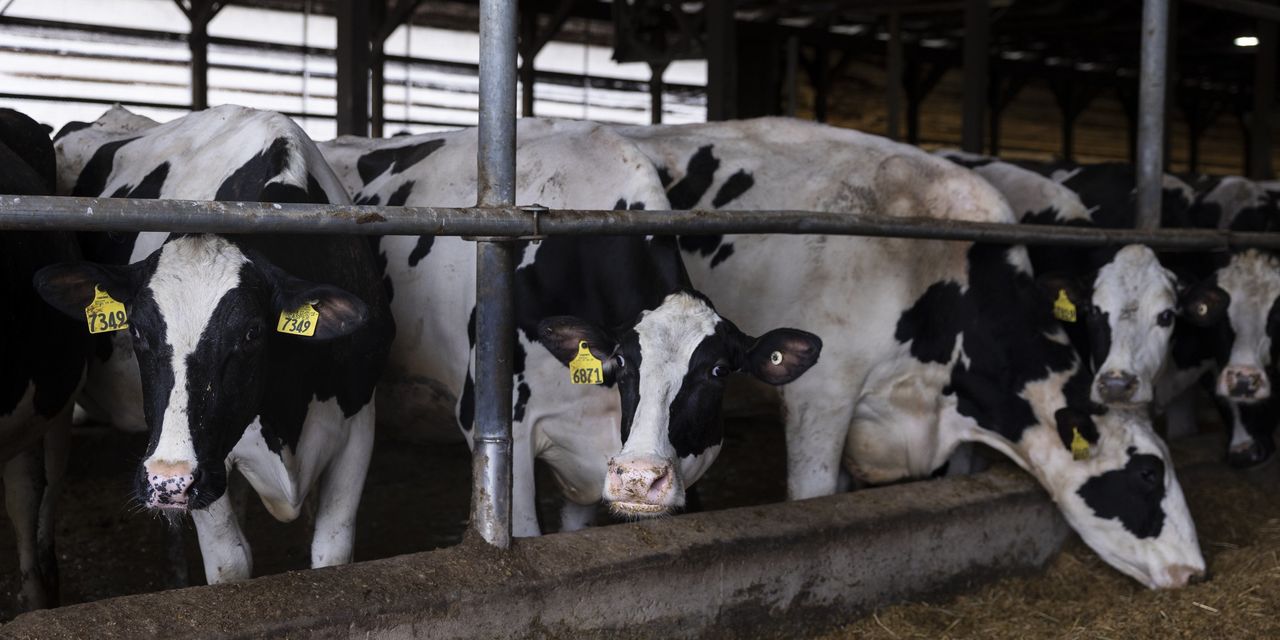 Agriculture, just as big a source of methane, isn’t getting the same tough treatment.

The Biden administration said it would spend more money to research cattle diets and expand gas-capturing manure-disposal systems for farmers to voluntarily reduce methane emissions, after supporting more than $200 million in such projects last year.

But it hasn’t proposed any new air-pollution regulations targeting the agricultural sources.

said when asked recently about regulating methane from agricultural sources. “You know, I can’t promise that we’re going to have anything this year, but it’s on the menu.”

That puts agriculture on par with the energy industry in methane emissions, with natural gas and petroleum generating 30% and coal mining 10%.

Some environmentalists say the Biden administration is going easy on big agriculture to avoid a bruising political battle with the powerful farm lobby. Agricultural groups say reducing methane from cattle isn’t as simple as plugging leaks from pipelines and oil wells.

Oil-and-gas industry groups haven’t pressed for methane regulations on agriculture, in part because they don’t want to antagonize lawmakers in rural districts, who often represent both energy companies and agribusiness, according to people familiar with the situation.

She said voluntary measures, such as restoration of grazing areas with carbon-absorbing plants, are the best way for the industry to lower carbon emissions.

“Regulating farmers and ranchers out of business isn’t the answer if you want to continue” those carbon-reducing farming practices, she said.

Environmentalists say that despite the challenges, there is an urgent need to curb emissions of methane, a potent greenhouse gas.

While carbon dioxide is considered the biggest global warming contributor, methane traps roughly 85 times as much heat. Global leaders at the Glasgow climate summit last year made cutting methane emissions a priority, with the U.S. and dozens of other countries pledging to cut emissions by 30% by 2030.

“The Biden administration has talked often about the importance of cutting methane and has imposed new methane restrictions on the energy sector, but they’re simultaneously giving a free pass to agriculture,” said

“The window for taking action is short,” Sierra Club attorney

said. “We have to do everything we can to address these emissions.”

Methane from manure and digestion has grown 19.3% since 1990, mostly because more farmers are mixing manure with liquid for disposal. Emissions from oil and gas, which face new regulations estimated to cost producers $1.5 billion by 2026, have fallen 17%, according to the EPA.

Policy makers in favor of more serious, enforceable regulations could face headwinds from the powerful farm lobby. That consortium of groups has the backing of well-resourced global producers such as

The agriculture lobby has spent about $704 million in the past five years to influence policy makers on a range of issue including greenhouse-gas emissions, according to statistics compiled by OpenSecrets, a nonpartisan watchdog group.

The lobby can also mobilize grass-roots campaigns quickly in nearly every rural Congressional district, where agriculture is often a major employer and economic engine, said

director of rural strategies and climate change for the Institute for Agriculture and Trade Policy, a Minnesota nonprofit that tracks emissions from agribusiness.

Select breaking and enterprise stories about energy markets and businesses, through news alerts delivered to you via email.

“I think Biden and the Democrats are reluctant to step up to really change agribusiness and the big agriculture lobby because they are worried about offending them and potentially losing support in rural America,” Mr. Lilliston said.

Congress isn’t weighing any proposals that include regulations on agricultural methane. Some lawmakers support voluntary financial incentives for ranchers and farmers to cut methane emissions.

(D., Calif.) said Congress should consider stronger emissions standards as an option for cutting methane. “But anything we do should consider the voices of family farmers across the country,” he said in a statement.

Farmers and agricultural researchers say there are no easy solutions.

“I’m optimistic, but I’m also cautioning the farming community not to wait for a silver bullet,” said

a University of California, Davis researcher who has tested natural ingredients such as garlic as feed additives to reduce methane from cows.

European Union food-safety regulators in November approved the use of the chemical Bovaer, which can cut belched methane from beef cattle by up to 80%. Its Dutch manufacturer,

Another possible solution calls for attaching rubber masks above cow nostrils to neutralize methane emissions. Cargill is preparing to put the devices, from London startup Zelp Ltd., on dairy cows in Europe later this year.

For manure, farmers are increasingly putting waste into covered lagoons or silo-like devices called digesters that capture methane that can then be sold as fuel.

But the systems can cost millions of dollars, and EPA records show fewer than 300 digesters operating on U.S. dairy farms.

“My question to society is, ‘Are you willing to pay for that?’ ” said

an Iowa farmer with a 2,400-head cattle feedlot.

Mr. Sievers used federal grants to build a $7.3 million digester system, and recently joined with developers on a $14 million expansion and pipeline that will enable him to sell methane to utilities.

“Because of the extremely high cost of these projects, most farms can’t do it on their own,” he said.

built a $3 million digester system for manure at her 800-cow dairy farm outside Philadelphia, using grants and savings.

But she still worries that regulators will mandate costly methane rules for farms.

“The fear is that someone from Washington is going to make a decision even though they’ve never been on a farm, and that’s not right,” she said.

Should the Biden administration place stricter methane regulations on farms? Why or why not? Join the conversation below.

“We’re confident we can make a lot of progress over the course of the decade,” said

—Timothy Puko contributed to this article.