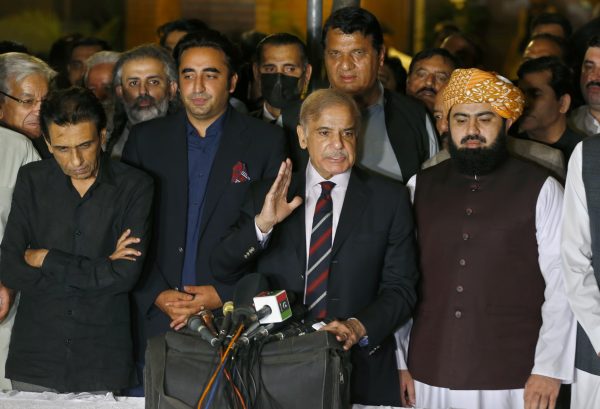 After weeks of political drama, Pakistan’s Prime Minister Imran Khan was ousted from power on Saturday night through a no-confidence vote in parliament.

Pakistan’s parliament elected a new prime minster on Monday. Head of the Pakistan Muslim League-Nawaz (PML-N) Shehbaz Sharif, the opposition parties’ joint candidate for the prime minister’s post, was elected without opposition. Khan’s Pakistan Tehreek-e-Insaf (PTI) party staged a walk-out in protest and did not participate in the voting.

The return of some form of political clarity boosted confidence at the Pakistan Stock Exchange early on Monday as it recorded a gain of over 1,540 points. The Pakistani rupee, which touched a historic low of 188 against the U.S. dollar a few days ago, dropped to 183 in anticipation of things returning to normalcy. The incoming government is expected to reach out to the International Monetary Fund (IMF) to revive the $6 billion bailout program, which was put on hold due to the existing political uncertainty and instability in the country.

Some in Islamabad’s corridors of power are heaving a sigh of relief that everything ended well. However, the abrupt end to the PTI government has prompted many to wonder if this is the end of the road for the party, once considered to be the party of the military. Has Khan’s political career come to an end?

It is widely believed that Khan was brought to power in 2018 by the country’s military leadership, in the hope that he would improve governance and would be “manageable,” unlike other leaders who came before him. It was expected that the security elite with the help of technocrats, would help Khan with governing the country.

However, this formula didn’t work out. Like many of his predecessors, Khan, once in power, starting believing that he could do as he wished, especially since the military seemingly didn’t have any other good political options to replace him.

Khan failed miserably on the governance front, and he never really paid heed to the military’s concerns regarding his team, particularly in Punjab province. His critics say that Khan never really governed, as his focus remained fixated on maneuvering the system not only to extend his stay by sidelining the opposition but also to push back against the structure that brought him to power in the first place.

For more than three years, Khan remained obsessed with the idea that the opposition should not be allowed to patch things up with the military leadership.

But things do not work like that in Pakistan and Khan has learned it the hard way.

Behind the façade of democratic forces trying to oust a sitting prime minister in a constitutional way, this was a pre-conceived plan, drawn out behind closed doors. The masterminds of the plan to oust Khan are the very same forces who previously collaborated to bring Khan to power in the 2018 general elections. However, this time around, Khan has ended up on the losing side of their scheming.

Only six months ago, no one would have thought that the PTI’s rallies would be blacked out from the mainstream media and that the party’s supporters would be dispatching millions of tweets in condemnation of the alleged role of the security elite in facilitating Khan’s ouster.

On Sunday night, the home of Khan’s point person on digital media was raided by unknown persons, possibly from the intelligence services. The PTI condemned the development, saying that “he has never abused anyone on social media and never attacked any institutions.”

On the other hand, the country’s institutions, backed by the security elite, are now fully functioning to provide protection to the incoming government. Shehbaz Sharif was going to be charged in a corruption case on April 11, but the hearing in this case has been postponed indefinitely and the investigating officer has gone on leave.

All of this confirms that Khan and his political party are the new pariahs in the Pakistani system, which means that his chances of coming to power under the current military leadership are non-existent. Khan’s party is doing a lot of damage to itself by criticizing the military for allegedly manipulating the politics in their opponents’ favor. Moreover, this extraordinary criticism has shown that the military leadership’s maneuvering of politics has become so public that every action in the country’s political landscape is now being credited to them.

On Sunday night, tens of thousands of people took to the streets in cities across Pakistan to protest against Khan’s ouster. In his first comment after losing the no-confidence vote, Khan said on Sunday afternoon that “Pakistan became an independent state in 1947; but the freedom struggle begins again today against a foreign conspiracy of regime change.”

“It is always the people of the country who defend their sovereignty and democracy,” he added.

This essentially shows that Khan is not going to sit quietly after what was done to his regime. He should be expected to mobilize his voter base in the coming weeks to push for fresh elections. It is unlikely that the incoming government will remain in place for long. Already, the PTI has decided that its lawmakers will resign en masse from the National Assembly, to create a political crisis for the incoming government. It doesn’t seem that political stability will return to Pakistan anytime soon with Khan looking to fight against the new beneficiaries of the system that benefited him in the past.

But the question remains: Can Khan come to power again without the help of the system that brought him to power and then forced him out? Can he still patch things up with an institution that holds everything together in Pakistan and decides the fates of governments?

Only time will tell, but for now Khan is back in the streets and the military leadership have found a new partner in the political realm to move things, at least for now.