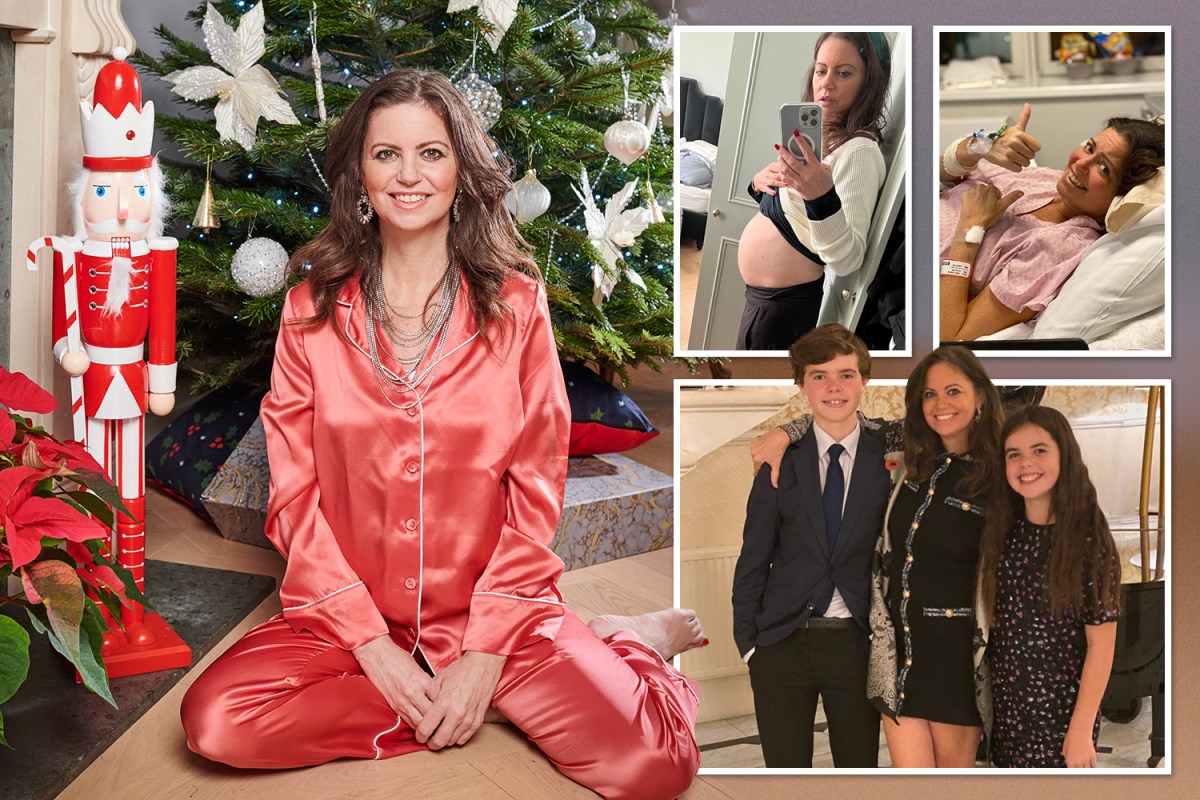 I’M obsessed with Christmas decorations. Every year I pick out new ones – each tells a story.

Those that know me well will be unsurprised to hear shoes are a favourite, but in recent years they remind me to take one step at a time.

Nutcrackers remind me of the ballet and being little, twirling around on the stage with my mum watching proudly.

This year, a giant nutcracker made me smile through the pain as I ventured out for the first time after my second bout of sepsis and another hospital stay.

Deep down though, the real ­reason they are so special is they are the magic I want to leave behind.

If I don’t make it to next Christmas, my collection of ­decorations will.

I picture my kids Eloise, 12, and Hugo, 14, unpacking them together and laughing at how over the top their mum was, and how much she loved Christmas.

For that first Christmas without me, I hope the sparkly mess will put a smile on their faces.

I hope it’s a Christmas tradition they carry on.

Five years ago, it became all the more important to me after I was diagnosed with stage 4 bowel cancer.

My world shattered into tiny pieces just days before Christmas 2016 when doctors told me my chance of living five years or longer was just eight per cent.

Five years became this terrifying benchmark in my head.

There was nothing I could find to make the data better — and believe me, I searched for it.

I mourned all the milestones I would miss; my 40th birthday, seeing my kids go to secondary school, celebrating another Christmas, new decorations on the tree.

That’s why I can’t really believe I am writing this.

My five-year milestone, that date I have spent the last five years fixating on, is next week. I have made it, against all odds.

I celebrated my 40th in October, I’ve seen the kids off to their new schools and I am gearing up for my fifth Christmas with cancer in tow.

My kids are growing up and it’s a privilege to see.

They know how hairy things have been this year, but they have also had new schools to focus on.

I’m so proud to see them grow up and I’m blown away by the people they are becoming.

My husband Seb is the one who has held everything together, and I can’t thank him enough.

Too many times he’s had to play dad, mum, provider, carer. He pulls me through the darkest times.

My parents, brother, sister and their partners and families hold us all up.

For all that, and so much more, I give thanks a million times over.

Getting here hasn’t been easy. From the beginning, I found myself falling into dark pits of despair.

The best advice I got was to take things one step at a time.

When you’re facing a mountain like eight per cent survival odds, it can feel too scary and too hard.

But, you can go a long, long way when you take your mountain little by little.

Just six months ago, the idea of Christmas and my five-year milestone felt out of reach.

The drugs keeping me alive started to fail and I was in liver failure. I had an emergency operation to stent my bile duct, then came the first bout of sepsis, followed by nuclear chemo.

I could only see the next day, beyond that was a blur.

Then six weeks ago, I was rushed back to hospital after waking up feeling groggy.

I was so weak Seb, 42, had to physically carry me to the car and into the hospital’s A&E.

I was wheeled into resus and tests later showed I was fighting three types of bacteria in my bloodstream.

The source of my health problems was my bowel, this time it was infectious colitis, which triggered sepsis.

My stomach ballooned to the point I looked nine months pregnant, and I was admitted for ten days while they pumped me full of antibiotics.

It floored me, I barely slept, I didn’t eat anything solid for 20 days.

I became incontinent and had to wear a nappy.

I couldn’t clean myself or walk to the loo without help and I was doing up to 50 number twos a day. I have never felt so weak.

Right now I am still trying to recover and rebuild — it’s relentless and there are days I feel like I just can’t fight this hard anymore.

The longer you live with incurable cancer the more exhausted you get. I try my best to live life to the full, but this disease has a way of throwing life into chaos without warning.

After being bed-bound for weeks, I have lost so much weight and muscle mass. I don’t really like looking at myself in the mirror.

My miracle would be not having cancer

Chemo and my cancer treatment are on the back burner too, because I have been too unwell for my body to cope.

That fuels a new level of anxiety, living in limbo waiting to see if I am strong enough to start treatment again, hoping my cancer isn’t ­growing in the meantime.

In an ideal world, I would park chemo until the New Year and enjoy my first Christmas for five years with no treatment making me feel sick.

But the sooner I can get the drugs back into me, the better my chance of seeing next Christmas, and dare I hope, the one after that.

All I want from Santa this year is to see another Christmas after this.

My Christmas wish is that my health improves, my miracle would be not having cancer any more.

Wishing for another five years feels like a pipe dream.

I never expected to be here now, so to have thought beyond this point felt futile. That’s why in many ways this is where my struggle really begins.

So while it’s only getting harder, I am rolling up my sleeves again ready to take whatever 2022 has to throw at me.

This “cancerversary” is bittersweet. Those scary percentages are real people.

So while I am one of the eight per cent, the harrowing truth is 92 per cent of people in my shoes haven’t been so lucky.

Most of the people I knew and met when I was diagnosed are no longer with us.

This time of year is always the hardest.

I can’t stop thinking about all those families missing their loved ones. It’s a reality my family may well have to face, but I count my lucky stars this year isn’t that year.

I’ve thought that for the last five years, and each time I have been proven wrong.

So maybe, just maybe, this is the first of more to come. That really would be my Christmas miracle.

In the meantime, as well as my giant nutcracker, I am dedicating a special decoration in my collection to the 92 per cent, and all those lives taken too soon.