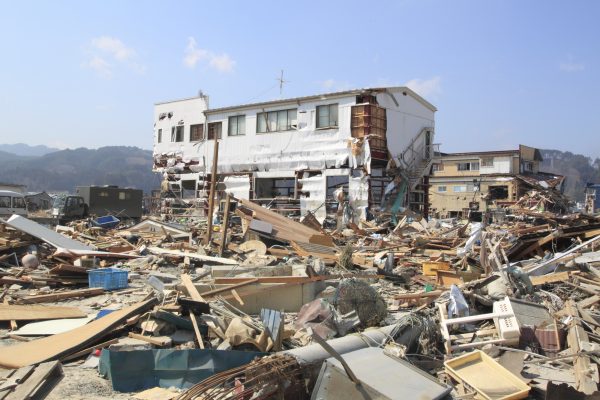 On March 11, 2011, a powerful 9.0 magnitude earthquake triggered a deadly tsunami that struck Japan’s northeastern region of Tohoku. The tsunami killed nearly 19,000 people and smashed into the Fukushima nuclear power plant, causing one of the worst nuclear meltdowns in human history.

For hundreds of miles the damage sprawled across towns dotting the Tohoku coastline, in some cases washing away entire communities. Homes that remained standing were cut off from power, gas, and water, and structural damage made people’s living spaces uninhabitable for weeks and even months after the initial earthquake. All told, nearly half a million people had to be evacuated out of the tsunami inundation zone in a very short time, to some 2,400 emergency shelters across the region.

As the disaster was unfolding on news channels and streaming across screens throughout the world, the last thing on many people’s minds was how individuals in the local LGBT+ (lesbian, gay, bisexual, transgender, and other gender and sexual minorities) community might be faring. Yet, for Yamashita Azusa, and other Tohoku LGBT+ activists, this question was top of mind.

“I knew from everyday experience that LGBT+ friends and folks in those communities would be especially isolated and in need of support,” Azusa explained in an interview with me, as a part of my research on LGBT+ disaster vulnerability and resilience.

The past decade of research shows that LGBT+ people are more vulnerable than the general population during a disaster, due to a number of factors. For example, in a disaster, while all women face a higher likelihood than men of being assaulted or harassed, for transgender people this number is many times greater. Being forced to choose between a men’s or women’s bathroom in an emergency shelter can exacerbate this issue, making trans people stand out in ways that are highly traumatic and unwanted.

Even seemingly straightforward processes of evacuation can create traumatic experiences for LGBT+ people. Because many LGBT+ families may not have access to full legal recognition for their relationships, depending on the laws in place where they live, they may not be considered family in an emergency. This means that they face the threat of being separated during evacuation processes that prioritize opposite sex couples and their biological children as a family unit.

LGBT+ communities also tend to have more difficulty accessing information in a crisis. For example, youth in this community are more difficult to reach in an emergency because of their higher rates of homelessness compared to other young people. Seniors in the community also are more likely to be isolated and less likely to have family support, and therefore can have difficulty accessing resources or receiving emergency messages.

While these are just a few examples of increased LGBT+ vulnerability in disaster situations, my research also investigates how the community turned their fate around in 2011 in ways that can be a model for disaster planning beyond Japan. Their stories offer important solutions that may actually lower vulnerability for LGBT+ and other marginalized communities, and can be applied in other disaster situations, including in the Pacific Northwest where I am currently based.

During Japan’s 2011 catastrophe, local LGBT+ people quickly realized that they could not rely on inclusive considerations like gender neutral single stall bathrooms during the mass evacuation. Both bathrooms and temporary bathing facilities set up by the Japan Self-Defense forces were typically divided in binary fashion: men on one side, women on the other. This alienated people who did not identify strongly with either of those gender categories.

In the emergency period, Azusa and other members of the Tohoku LGBT+ community began identifying which of their community’s needs were not being met, and then pooling resources in order to develop their own strategies to take care of themselves.

In just one example, a gay man in the community recognized that only offering men’s or women’s bathing facilities presented a potentially problematic blind spot in the existing disaster response. Because he was lucky enough to have running hot water, he took it upon himself to open his home to strangers in the queer and trans community who wished to avoid the gender binary of existing facilities.

Others, like Azusa, developed message boards with targeted information about where to access supplies such as sanitary napkins and gender-appropriate undergarments, even going so far as to personally deliver those supplies to shelters along the coast where they were needed but not readily available to gender-diverse people.

Some of these activities gave way to in-person meetings and groups gradually began holding regular check-ins, eventually organizing fundraising activities and even creating inclusive disaster planning handbooks and other awareness-raising resources for inclusive disaster planning. Their creative response to their community’s vulnerability means that people in other locations can learn from these experiences, in many places throughout Japan and the world.

These efforts may hold the key to the future of disaster planning for several reasons.

First, in our era of climate change, when disasters and natural hazards are rising in frequency and intensity, events like wildfires, floods, and landslides are increasingly impacting human societies. We will continue to encounter crises like these with more and more regularity, as disasters and environmental catastrophes increasingly encroach upon our lives in different ways. This means that the need for new and innovative ways to understand, plan for, mitigate, and adapt to natural hazard threats will continue to grow.

In spite of this growing need, the way many people in governments, institutions and civil society think about and understand natural hazards remains outdated. Too much focus remains on the hazard threat itself, with little consideration for the specific experiences and needs of the people being impacted at all phases of the disaster, from the planning phase to the longer-term recovery.

Neglecting to consider diverse individuals’ needs in a crisis means that those people face greater risks to their lives and wellbeing, and that pathways to safety will seem unwelcoming to certain people more than others. When seconds count, even the possibility of feeling unwelcome or unduly scrutinized in a shelter can mean the difference between life and death, between evacuating to a potentially unsafe space or choosing to remain in an equally unsafe situation, such as a dangerously damaged home.

There are also other important advantages to the greater population as a whole in making disaster planning more inclusive. For example, many of the potential solutions to vulnerability for the Japanese LGBT+ community, such as providing gender inclusive bathrooms, can benefit others as well, by creating a safer and more comfortable environment not only for people in the transgender community, but also for families with young children and others. In other words, the benefits of an inclusive approach are not limited to any one population but can add to the resilience of society as a whole when disasters strike.

On one hand, Japan’s mass evacuation in 2011 demonstrated why the country is considered the global leader in the disaster planning world. Indeed, disaster researchers have pointed to the fact that, had this disaster struck any other location on earth, the damage and loss of life would likely have been many times greater than it was. What is still missing from this expertise-driven approach to disaster planning, however, is a lens that incorporates LGBT+ and other diverse perspectives into the preparations.

LGBT+ grassroots support groups in Tohoku are a great example of how such marginalized communities are moving the needle in a more inclusive direction when it comes to disasters and how to plan for them. This could have a great impact on how people experience the next crisis to impact human societies in many parts of the world.

My research project on LGBT+ resilience and vulnerability is embedded in the Cascadia Coastlines and Peoples Hazards Research Hub, a National Science Foundation-funded project dedicated to informing and enabling integrated hazard assessment, mitigation, and adaptation for coastal communities. The expertise of Japanese LGBT+ grassroots groups about their own needs and how to meet them can serve as a new model for understanding how disasters impact diverse people, filling important gaps in standard disaster planning.

Here in Cascadia, where we already face rising climate related crises, we too are overdue for a massive earthquake and tsunami on par with what Japan experienced in 2011. Unfortunately, our region is nowhere near as prepared for the impact of such an event. The focus of my work, therefore, is on empowering diverse local people to generate new ways of thinking about hazards and vulnerability, and mobilize their resilience in ways that can be put to use today without the need for technocratic expertise.

I hope that by diversifying participation in disaster planning, this approach will ensure that all people are better protected when the next disaster strikes.