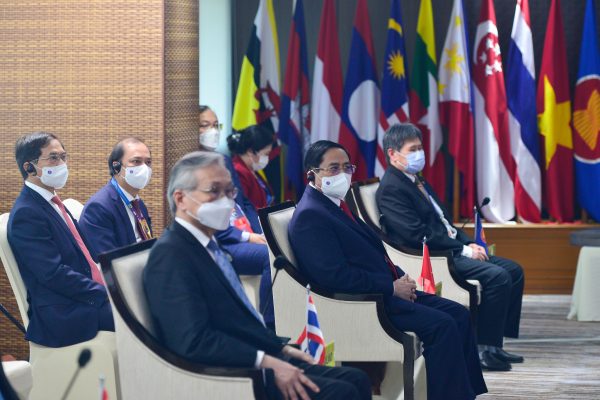 The Southeast Asian bloc must make it clear that it will not accept the military junta’s sham election.

ASEAN leaders take part in a special summit on Myanmar at the ASEAN Secretariat in Jakarta, Indonesia, Saturday, April 24, 2021.

The Association of Southeast Asian Nations (ASEAN)’s Five-Point Consensus plan to resolve the crisis in Myanmar has failed, mostly because it ran up against the reality of a power-hungry, uncompromising military leadership in Naypyidaw. That does not mean, however, that ASEAN has nothing to contribute to efforts to help Myanmar find a way out of its current situation. In fact, ASEAN can make an important contribution by sending a clear message to the junta that it will not accept its planned 2023 sham election.

Myanmar’s generals, facing overwhelming public hostility and an unexpectedly strong resistance movement, are trying to sell to the world the idea that next year’s election represents the best hope for ending the crisis that has overwhelmed the country for the past 19 months. The generals are counting on governments in the neighborhood to accept the elections, conferring legitimacy on whatever military-dominated government emerges, dealing a blow to the resistance’s morale, and giving the military an edge in the country’s power struggle.

There are three reasons why ASEAN member states should upset the generals’ plans by saying firmly that they will not accept the elections. First and most importantly, the proposed elections do not actually offer an exit from the crisis. Much of the country has been united against the junta from the moment of the coup in February 2021, and the military’s shocking violence, appalling behavior, and stunning mismanagement since then have only deepened popular opposition and active resistance to its rule.

The Myanmar public has made it clear that it wants the military out of power and will not accept new junta-managed elections. Given this, one can safely predict that a large majority of voters would boycott the polls or would cast their ballots only under duress, with a high likelihood of significant violence on election day. Put simply, junta-managed elections would do nothing to address the root cause of the crisis and would likely increase conflict and instability.

Second, and related to the first point, any elections run by the military will be so far from credible as to constitute a tragic joke. The junta has filled the election commission with loyal hacks, imprisoned most of the country’s prominent politicians, sought to crush independent media, and created an atmosphere of intense fear. Anyone who knows Myanmar – and who remembers the military’s shameless holding of a constitutional referendum while the country was reeling from Cyclone Nargis in 2008 – understands there is zero chance that junta-run elections would be anything other than a complete farce. China and Russia won’t care and will accept the elections nonetheless, but ASEAN claims to have higher standards. Were it to accept the elections as “a step forward,” ASEAN’s standing and credibility in the region and the world would suffer a major blow.

Third, by taking a firm stance against sham elections, ASEAN might gain leverage vis-à-vis the junta and restore its central role in efforts to help Myanmar find a genuine exit from the current crisis. Such a stance might not stop the generals from holding the elections, but it would send a strong signal to the rest of the world not to cynically accept them. If they see that their election exit strategy has little hope of succeeding, some senior military officers – feeling growing pressure from the resistance – might look for another exit strategy. ASEAN, in close consultation with the NUG and others in Myanmar, can then think about suggesting other paths out of the crisis that involve the military making substantive political concessions.

Some might argue that it is unrealistic to expect the other nine member governments of ASEAN to achieve consensus on such an approach, given that several are authoritarian themselves and the institution has a practice of non-interference in members’ internal affairs. They might be right, but all ASEAN members have an interest in Myanmar returning to stability, if not democracy, and might be open to this approach if they believe it has a better chance of moving the country in the right direction than does supporting bad elections.

Also, one could argue within ASEAN that accepting sham elections in a country where the vast majority of the population doesn’t want them would itself constitute interference in Myanmar’s domestic affairs. Moreover, taking a stance on the junta’s election plans would not set a dangerous precedent, if some members worry about that. The junta’s appalling violence against its own people and lack of domestic support and legitimacy put it in a category all by itself.

ASEAN faces a choice: continue to pursue its failed Five-Point Consensus approach that has made it largely irrelevant and cost it credibility, or take an eminently reasonable stance that at least has a chance of restoring its central role and of helping Myanmar find an exit path from its present downward spiral.