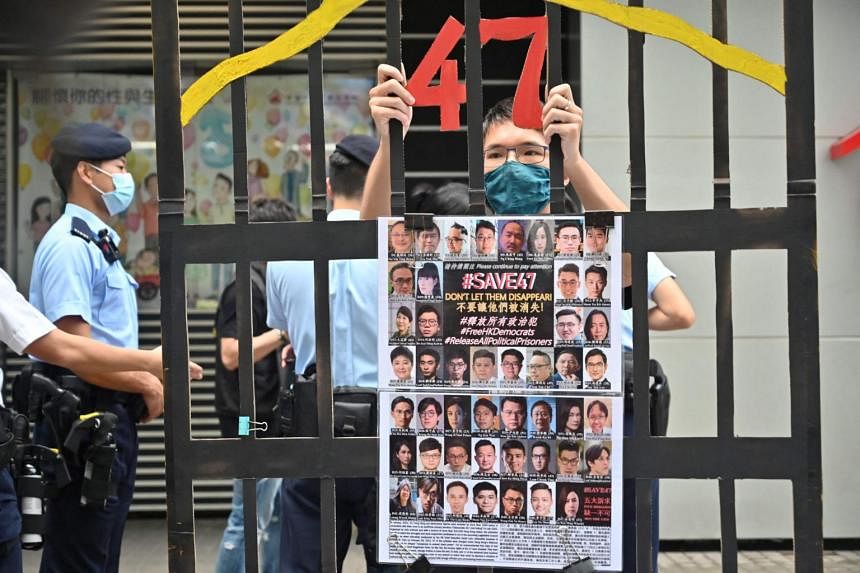 HONG KONG (AFP) – Hong Kong’s largest national security case was sent to trial on Tuesday (June 7), after lingering 15 months in pre-trial procedures during which most of the 47 defendants were denied bail.

Under the security law, which Beijing imposed in 2020 following huge, sometimes violent democracy protests, the pro-democracy figures are charged with “conspiracy to subversion” for organising an unofficial primary election.

Subversion is one of the four major crimes under the security law and can carry a punishment of up to life in prison.

The defendants, aged between 24 and 66, include democratically elected lawmakers and district councillors, as well as unionists, academics and others, whose political stances range from modest reformists to radical localists.

The case was first brought to court in March 2020, when most of the 47 were denied bail after a four-day marathon hearing before a judge handpicked by the government to try national security cases.

Most of the pre-trial hearings over the past 15 months, though held in an open court, have been subject to reporting restrictions – with the court repeatedly refusing applications from defendants and journalists for them to be lifted.

Family members and legal representatives have told AFP that the opaqueness has made the defendants “frustrated and depleted”, and allowed the prosecution to “move the goalposts”.

After a three-and-half-day hearing that began Wednesday and Thursday last week and finished on Tuesday, all but one of the 47 defendants were committed to a senior court by Principal Magistrate Peter Law, one of the national security judges.

Last Wednesday, Mr Law announced that seventeen defendants had been committed for trial.

Twenty-nine others – including legal scholar Benny Tai, who was also one of the leaders of the “Occupy Central” movement in 2014 – were committed on Monday and Tuesday.

Defendants who submit a non-guilty plea are committed for trial, and those who plead guilty committed for sentencing, according to the Magistrates Ordinance.

The one outstanding defendant will join the cohort later after further proceedings before the magistrate.

Hong Kong faces scrutiny over whether its legal system can maintain its independence as China cracks down on dissent with the security law.

More than 180 people have been arrested over the past two years since the security law came into force – the bulk of them activists, unionists and journalists – and 115 have been prosecuted.

Three men have been convicted and sentenced to jail for 43 months to nine years. One of them sought to appeal his 69-month sentence on Tuesday, with the court reserving judgement until early September.

The 47 defendants form the largest group in one single case under the law.

Authorities say the security law has successfully returned stability to the financial hub, which was upended for seven straight months by large and sometimes violent protests in 2019.

But critics say it has eviscerated civil liberties and the political plurality the city used to enjoy.